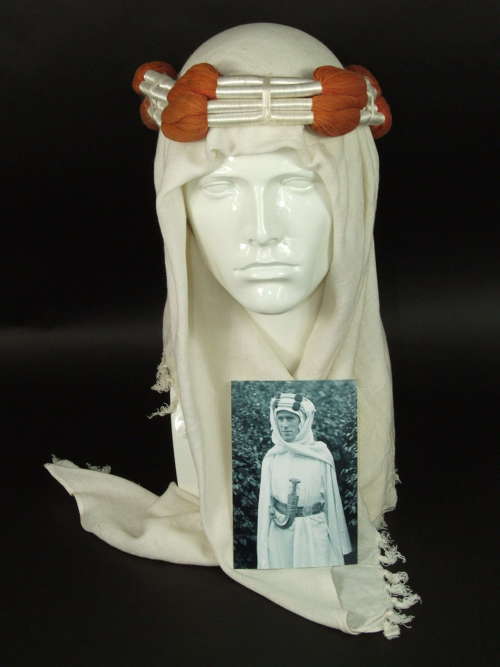 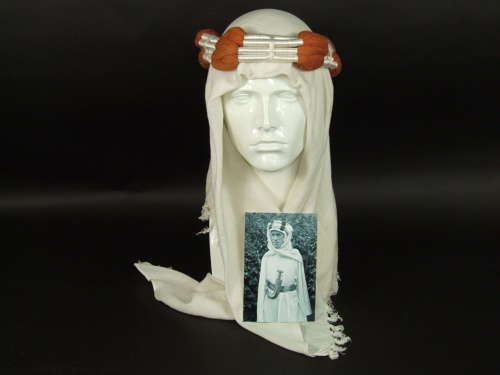 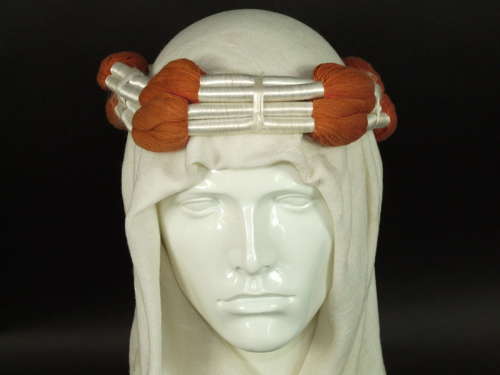 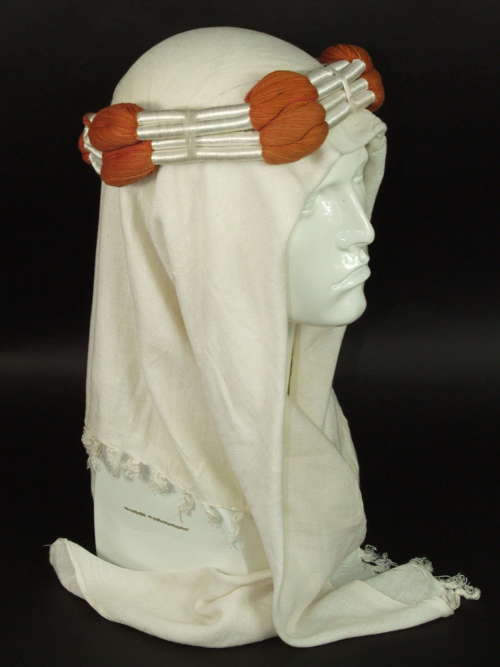 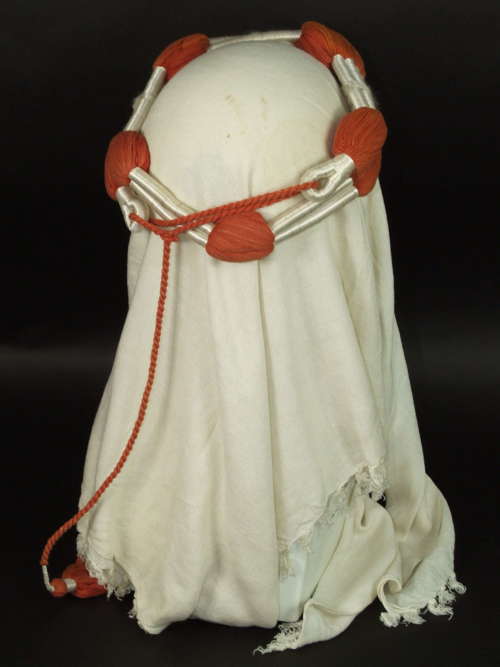 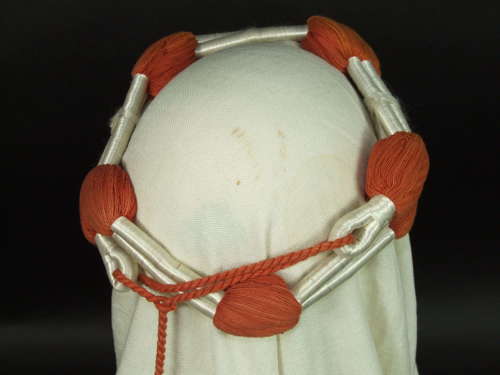 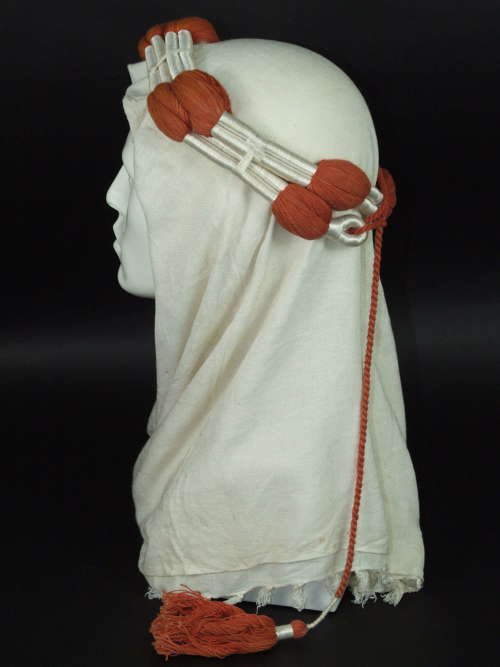 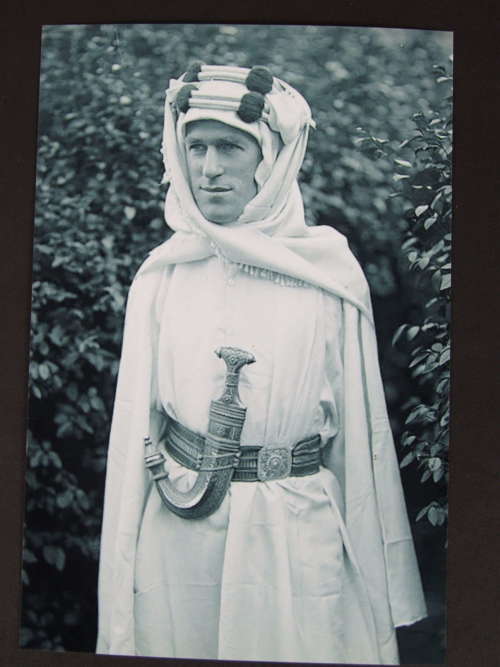 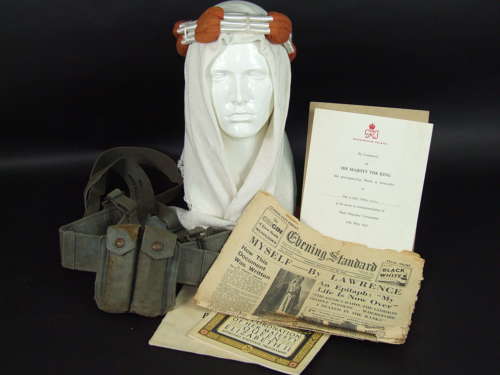 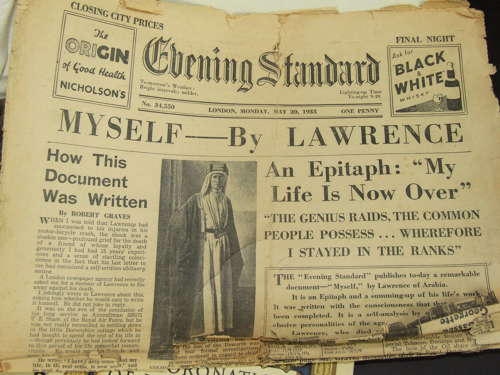 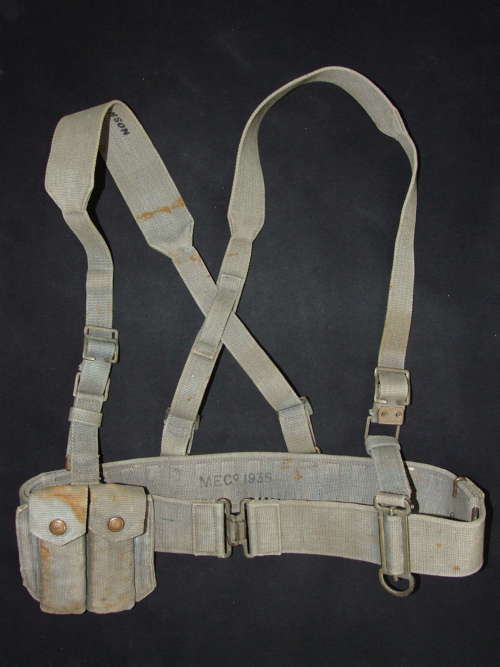 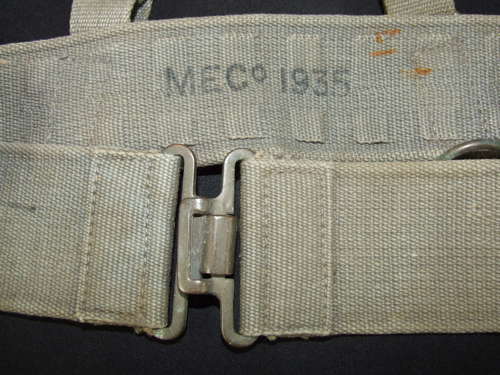 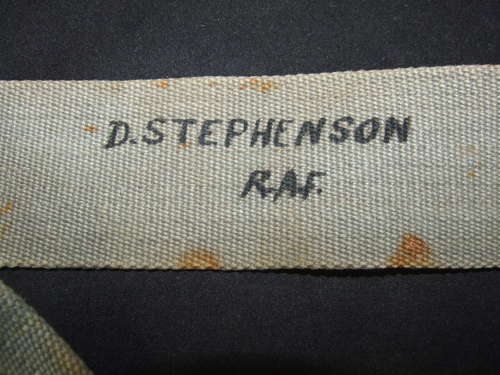 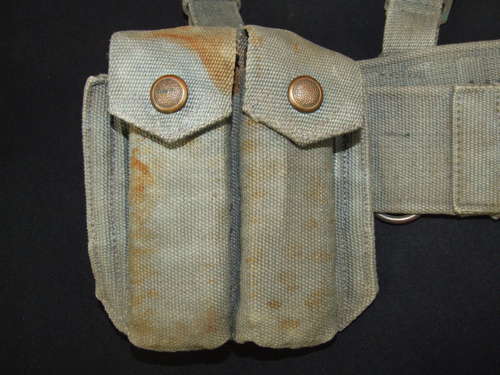 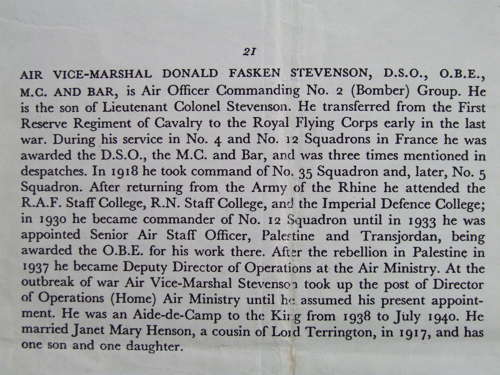 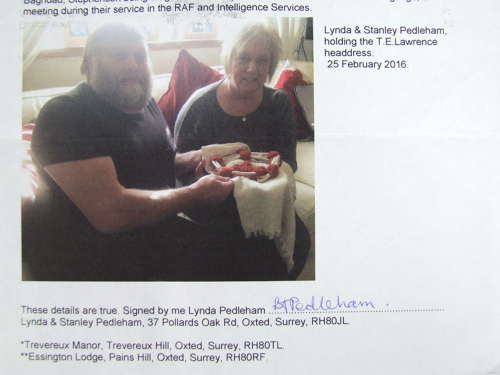 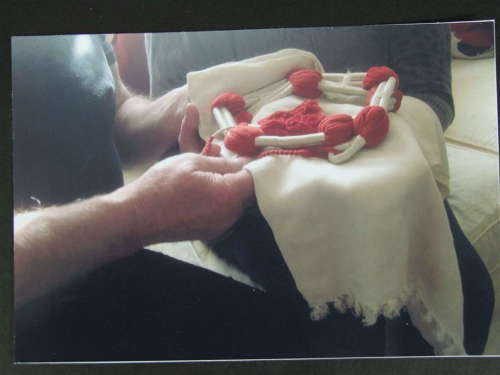 Arab Headdress with provenance to T.E.Lawrence - "Lawrence of Arabia"

Overall condition is very good with minor stains, a few small holes and minor repair. Complete with its Circlet (Agal) in red cotton, covered with white silk, the ends joined by a red cotton cord with tassel. In generally very good condition.

Lynda Pedleham was employed as a housekeeper for Donald Stephenson between 1968 and 1975. In 1970 Stephenson moved home from Trevereux Manor* to Essington Lodge**. The house move occasioned a sort out of contents, several items being given to Lynda Pedleham including a train set, Stephenson's 1925 pattern Waisr Belt, a 1935 newspaper, award document for the 1937 Coronation medal to Wynn AP Howel Thomas ***OBE and the T.E. Lawrence headdress.  Stephenson said to Lynda: "...the headdress was worn by T.E.Lawrence, Lawrence of Arabia, he gave it to me, keep it as it will be worth something in years to come...".

Exactly where and when Donald Stephenson and T.E. Lawrence became acquainted is not known.

From Stephenson's obituary we know he was employed in banking in Baghdad 1925-31 and had a permanent commission in the Royal Air Force 1932-44. Stephenson was a language specialist and interpreter in Arabic. It is possible they became acquainted by either: Stephenson's activities in Baghdad, Stephenson being taught and subsequently conducting examinations in the Arabic language, or meeting during their service in the RAF and Intelligence Services.

Of his attire, Lawrence said "...If you wear Arab things, wear the best. Clothes are significant among the tribes, and you must wear the appropriate, and appear at ease in them. Dress like a Sherif, if they agree to it..." (T.E.Lawrence, from 'Twenty-seven Articles', 1917)

Lawrence famously wore Arab dress during the Arab Revolt, although he had first discovered how well suited the costume was to desert life when excavating at Carchemish in Syria in the years before World War I. His adoption of Arab dress was practical but also crucial to his mission, which required that he have the trust of the Arab people. Towards the end of the war, he tended to wear more elaborate costume. By the time he returned to Europe after the war, Lawrence had assembled a substantial collection of contemporary Arab dress and he made a number of gifts to friends and family.

Items of Arab dress from Lawrence's collection are now found at institutions including the Ashmolean museum, Oxford, All Souls College, Oxford, the Museum of Costume, Bath, and the National Army Museum (see Jeremy Wilson, Lawrence of Arabia, (National Portrait Gallery Publications, 1988), nos 105, 106, 108, 112, 113, and 114).

I have included with the images a brief resume of Air Vice Marshal Stevenson D.S.O., O.B.E. M.C and bar whose obvious character adds greatly, in my opinion, to the provenance. A WW1 Pilot he was to become Air Officer Commanding No2 Bomber Group during WW2 and was Aide de Camp to the King betweem 1938 -40.

Included in the sale are a number of items originally gifted to Lynda Pedleham by Donald Stevenson including his scarce 1935 dated RAF Waist Belt with cross straps and two magazine pouches for the 1911 Colt pistol, a 1935 dated newspaper with a front page article, award document for 1937 Coronation medal to Wynn AP Howel Thomas*** OBE, and the T.E.Lawrence headdress. There is a quantity of research material on Lawrence and various letters requesting information on Donald Stephenson. Also included is a picture of Lawrence wearing a similar Headdress.