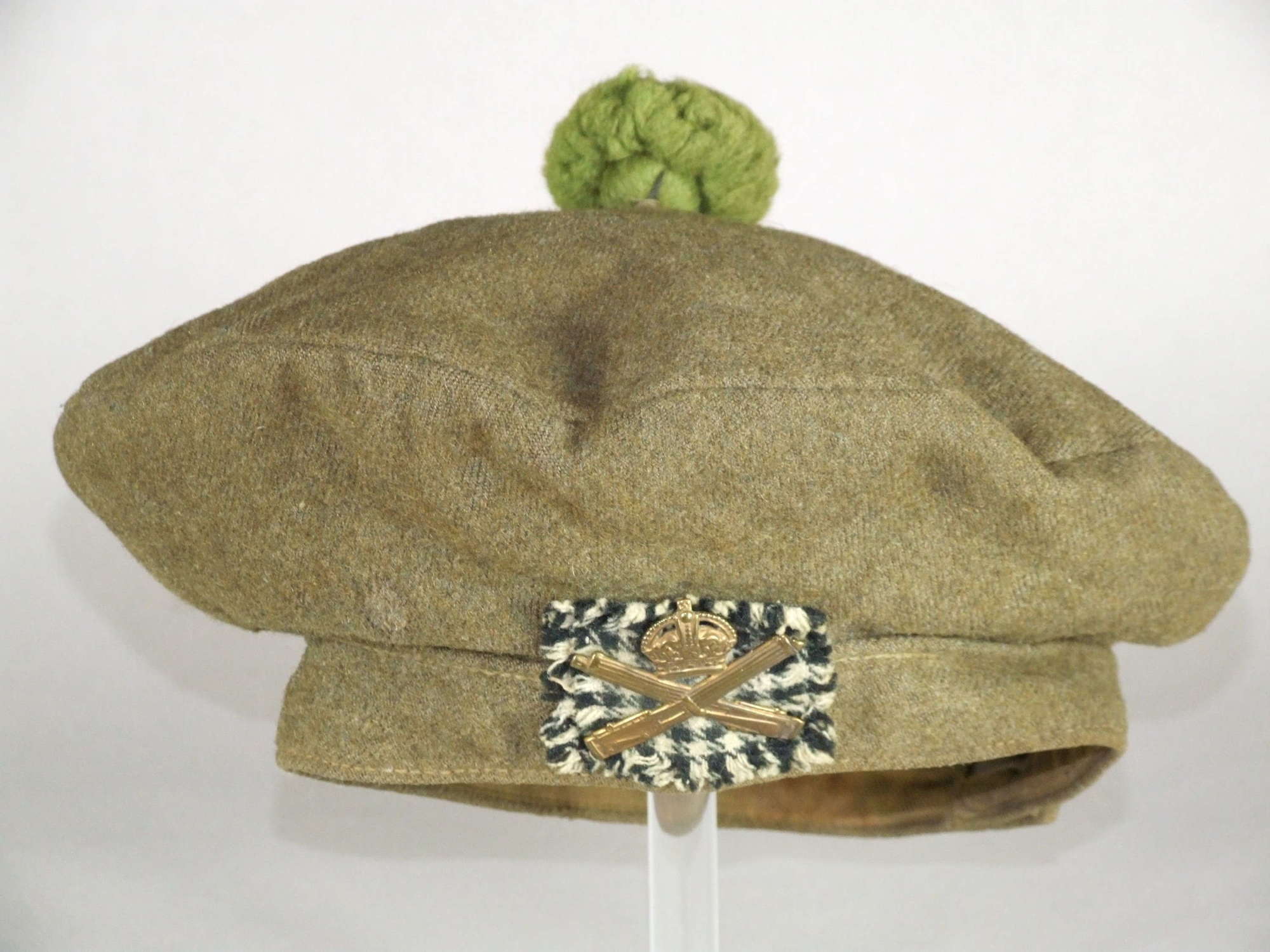 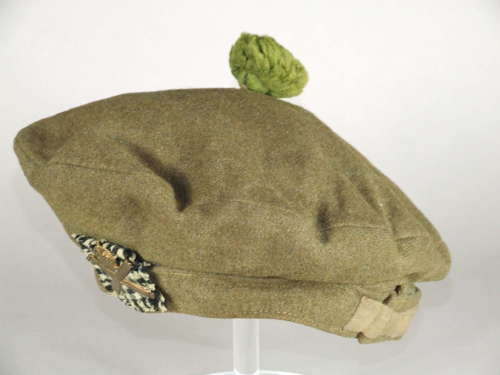 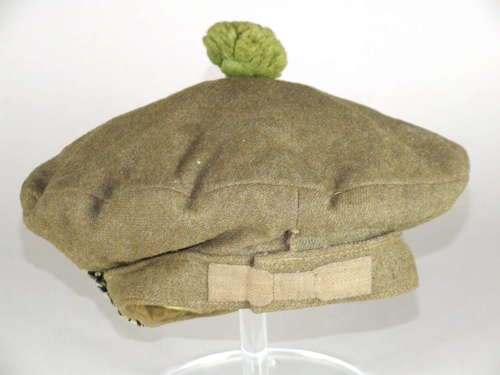 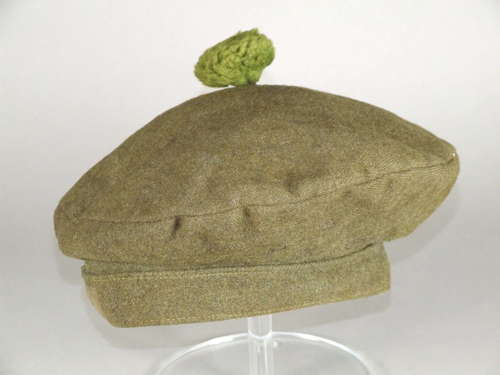 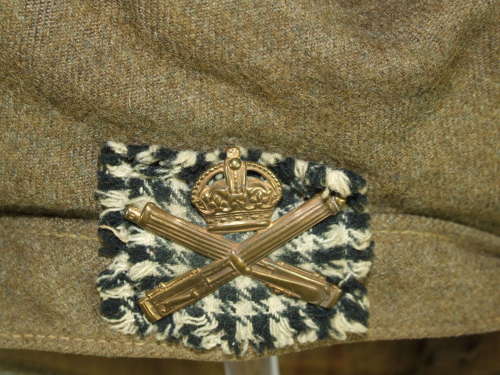 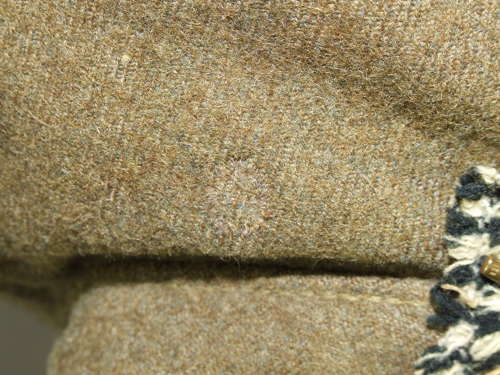 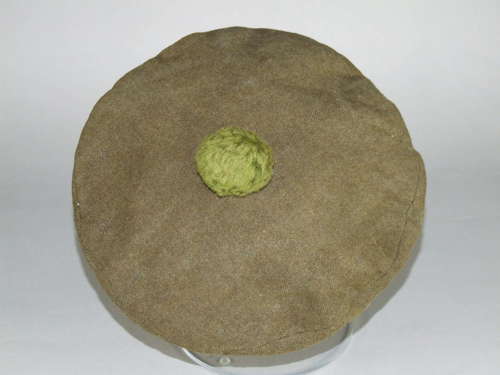 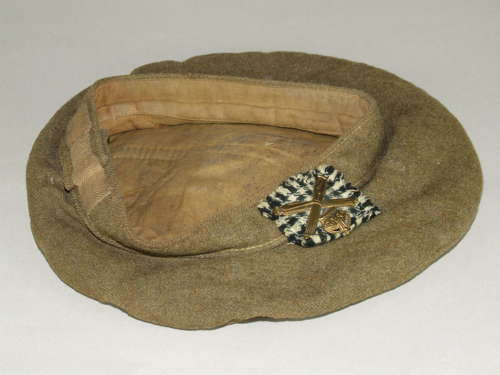 An exceptionally rare WW1 British other rank’s Tam 'O’ Shanter bonnet to the Machine Gun Section of the 1st Battalion Tyneside Scottish, in the configuration for the Battle of the Somme.

The Bonnet itself is in good used condition with much service wear, and with some areas of moth superbly repaired using the identical cloth sewn into place. Difficult to see I have tried to show them in the images. The Machine Gun Corps Cap Badge and Northumbrian Tartan can easily be seen to have always been on the bonnet with each never having been removed. Most importantly there are no holes at all to the lining which there would be had the bonnet been used at some time by a more common Scottish unit, (the vast majority of Scottish regiments used badges with lugs which leave two pierce holes east and west to the lining). The slider of the Machine Gun Corps badge does not pierce the bonnet, it is tucked behind the Northumbrian Tartan, which is then in turn sewn to the bonnet's body. This sewing of the tartan can just about be discerned in a couple places on the lining.

The lining itself is very greasy from wear with any markings that were there long gone. The lining does however have the classic WW1 feature for such bonnets of having twin parallel stitch lines to the quilting, this changing to single quilting stitch lines post war. The back of the bonnet also has the equally classic WW1 defining feature for these of having twin pairs of eyelets for the rear tying tape, again this was changed post war to just one pair of eyelets. Finally, the tying tape that passes through the twin pairs of eyelets has been sewn down to form a bow, this being pretty much standard practice for long serving soldiers at the time, and of course that fitting in nicely with the large amount of wear to the bonnet.

Given the amount of lengthy 1916 only service wear shown on this Tam ‘O’ Shanter, I find it impossible to believe it was not worn by the original owner during the 1st Battalion’s Somme period.

Whilst any WW1 issue Tam 'O’ Shanter is difficult to find, in no way can they usually be called exceptionally rare. This particularly example however amply warrants the description due to both: the very small yet much sought after unit of the original owner, this being the 1st Battalion Tyneside Scottish Section of the British 102nd Brigade's Machine Gun Corps Company; and the limited time scale for which the insignia combination shown was worn, this being 1916 only. That terrible year of course the Battle of the Somme took place where notoriously the Tyneside Scottish Brigade was most fatally engaged.

The Brigade was raised in 1914 in answer to Lord Kitchener’s call for war volunteers. It contained four “Pals” Battalions from Newcastle-on-Tyne. “Pals" Battalions famously and tragically being specially constituted battalions of the British Army comprising groups of men who had enlisted together in local recruitment drives, with the promise of being able to serve alongside their friends, remaining as such all the way to deadly battle as opposed to being split up and arbitrary allocated to different battalions as was usually the case. Under this premise, on Tyneside, reports of groups of friends marching ten miles into the city to enlist were common.

Tam ‘O’ Shanters were introduced late in 1915. In practice this meant their wear by the British Army was essentially from 1916 onwards. On the Tam ‘O’ Shanter the Tyneside Scottish wore 42nd Government (Black Watch) Tartan as a backing to their badge, however, for 1916 only, the Machine Gunners for each Tyneside Scottish Battalion, who from October 1915 came under the overall umbrella of the newly formed Machine Gun Corps, wore each a unique “Battalion Specific” tartan backing to their badge, which for them by now was naturally the Machine Gun Corps one as seen here.

The Machine Gun Section with the 1st Battalion Tyneside Scottish exclusively chose the distinctive Northumbrian or “Shepherd's” tartan for their badge backing, this the special tartan of the 1st Battalion Pipers at that time. This is the distinctive tartan displayed behind the Machine Gun Corps badge on this Tam 'O' Shanter. In 1917 individual "Battalion Specific" tartans for the Tyneside Scottish Pipers and Machine Gunners were abandoned and each reverted to the universal 42nd Government Tartan worn by the remainder of the brigade.

On the 1st of July 1916, the first fateful day of the Battle of the Somme, the Tyneside Scottish Brigade suffered the greatest losses of any brigade deployed. The brigade's losses were so severe that on the 6th July it was withdrawn and transferred to the 37th Division. The 1st Battalion Tyneside Scottish themselves (attacking north of La Boisselle) incredibly losing 590 men on that first day alone, this more than half the Battalion. There were only 48 Machine Gunner other ranks with the 1st Battalion Tyneside Scottish, making this Tam 'O' Shanter quite possibly the only such surviving example from that period. 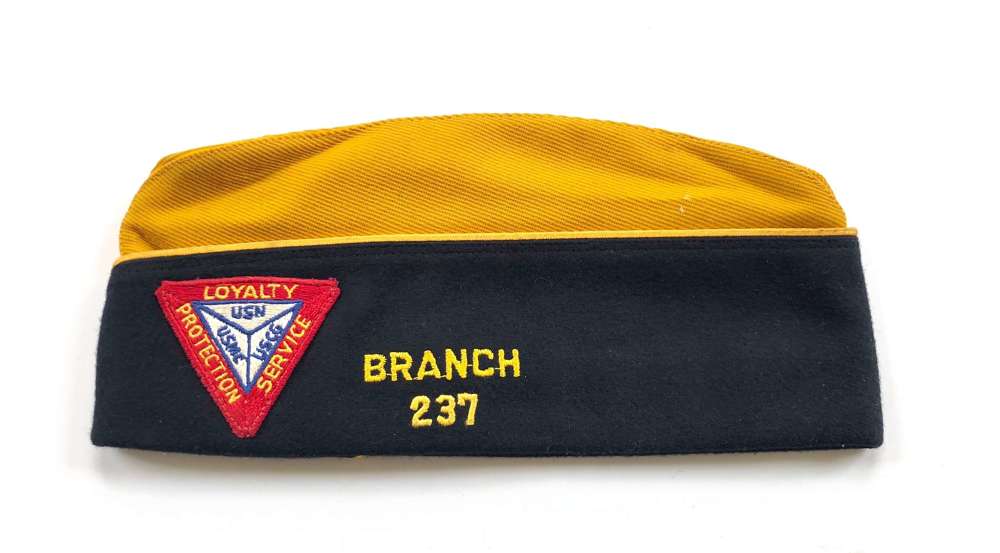 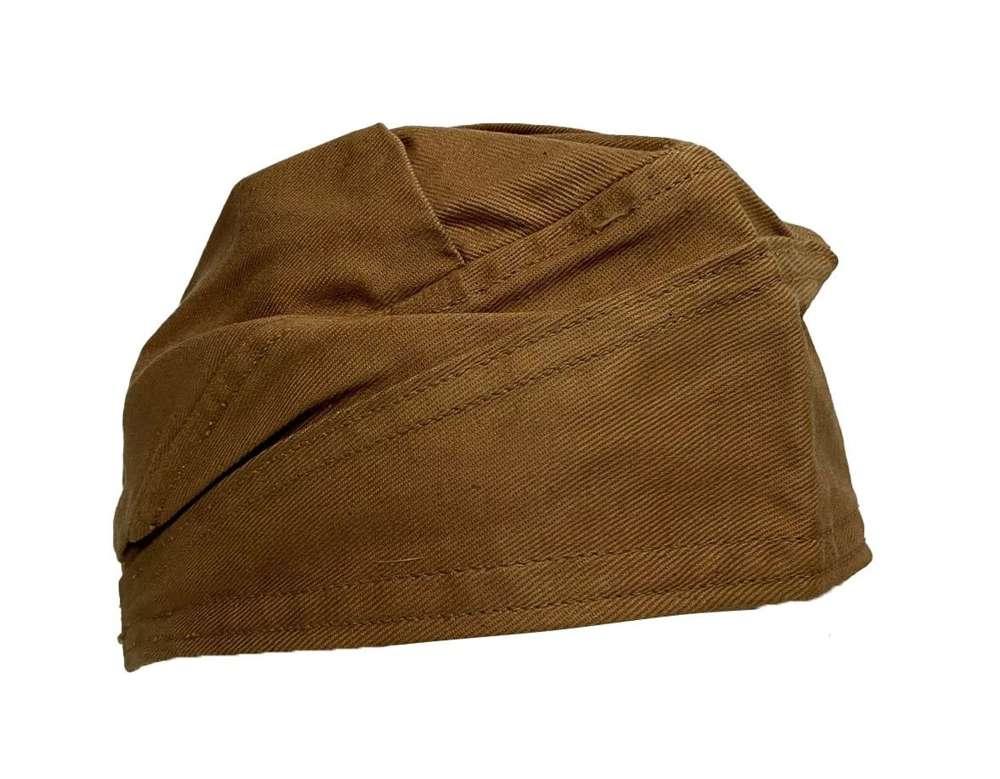 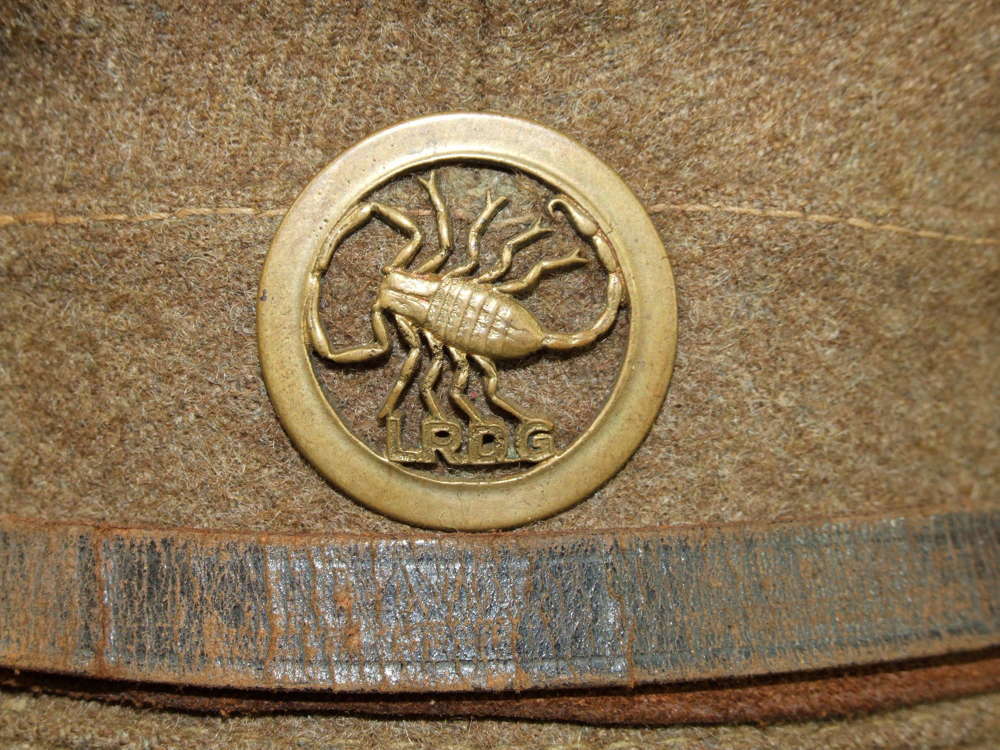 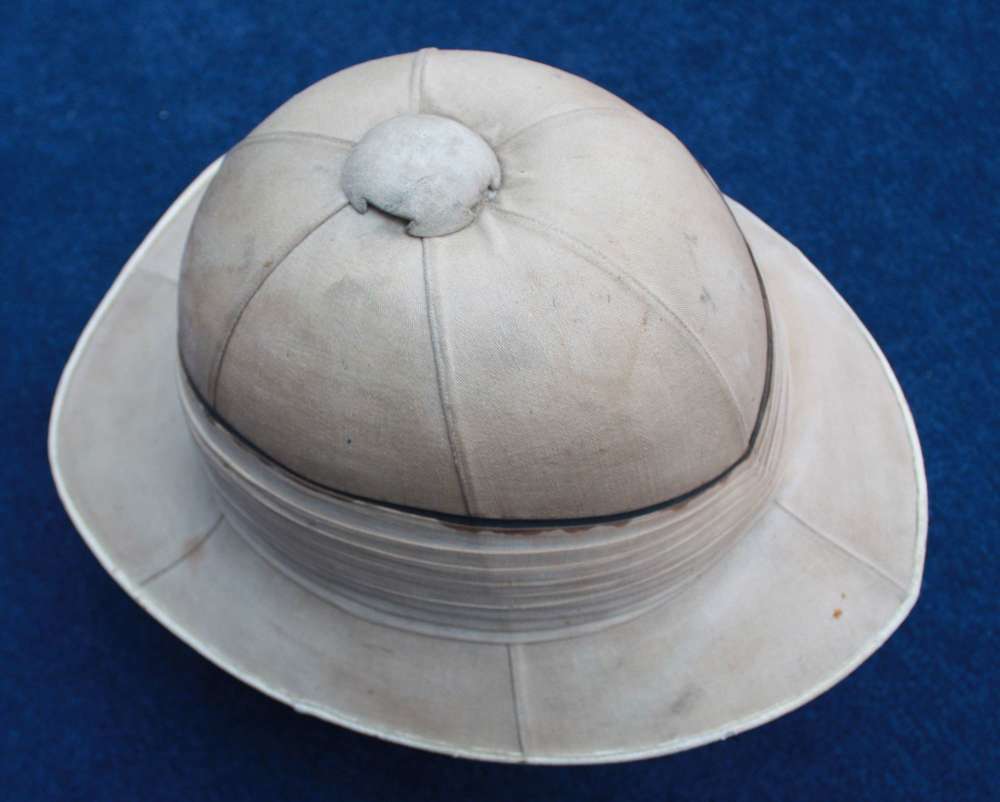