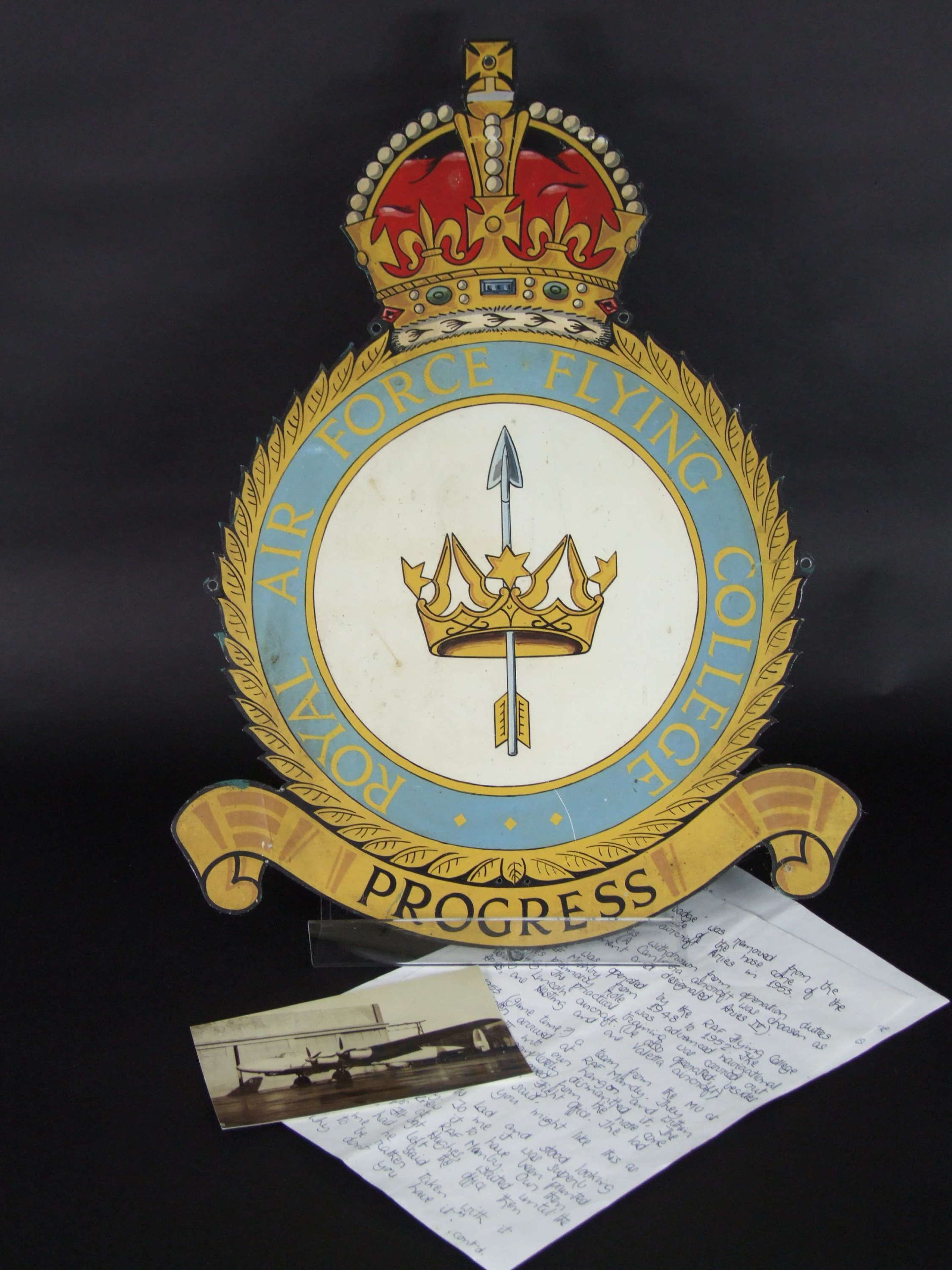 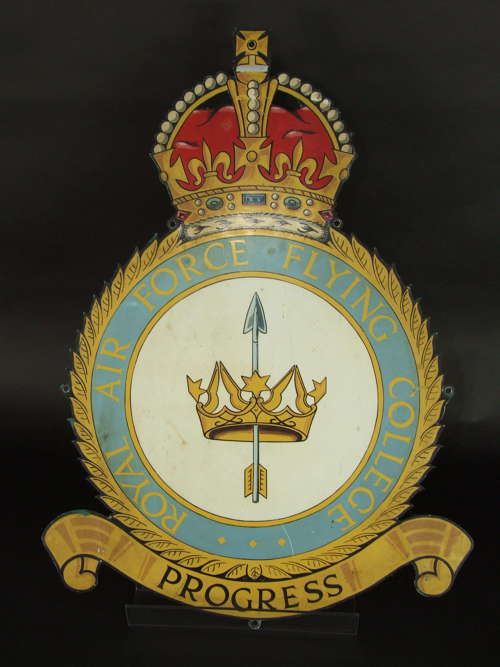 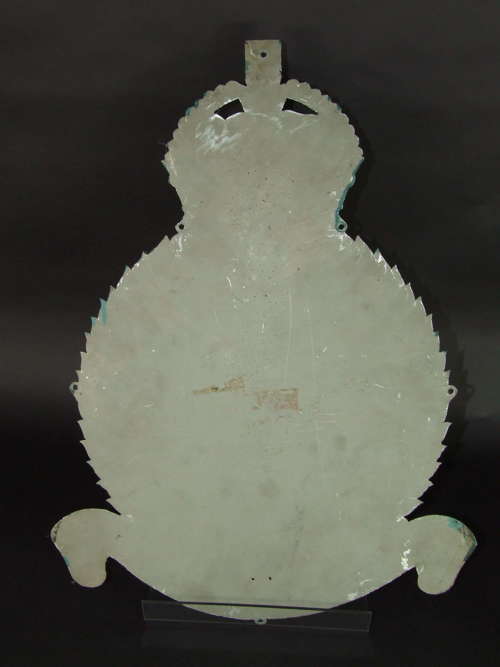 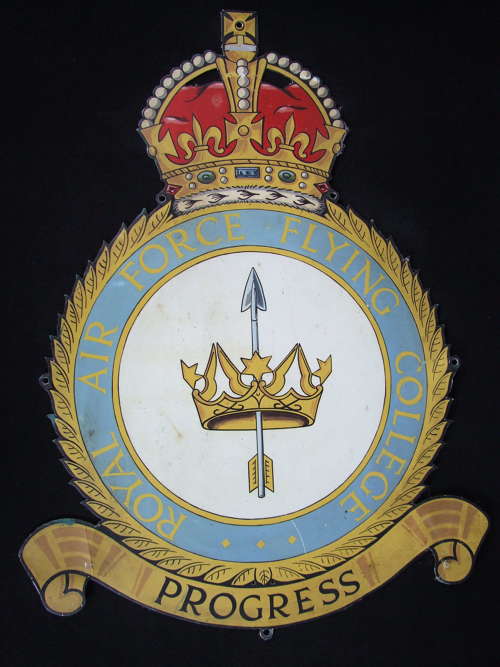 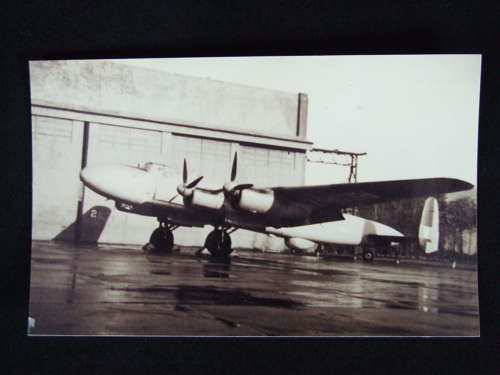 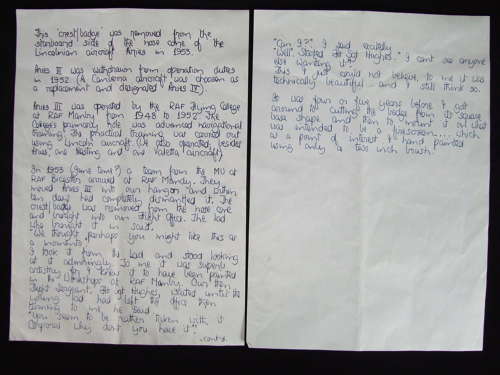 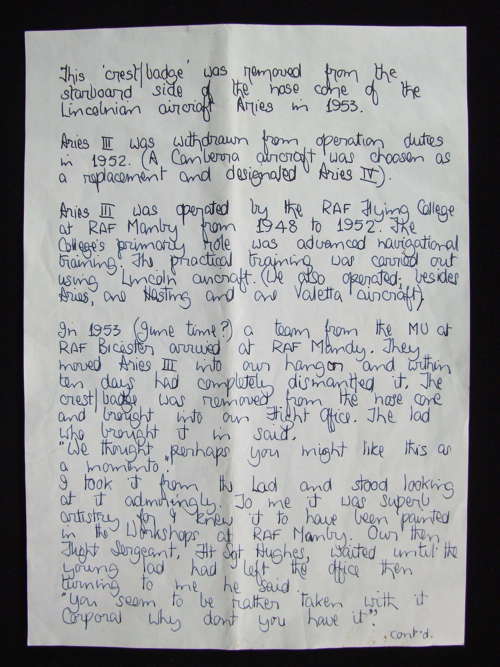 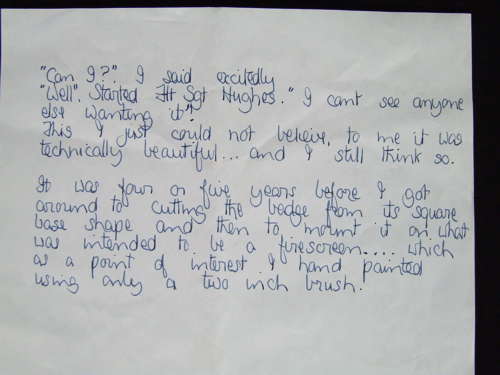 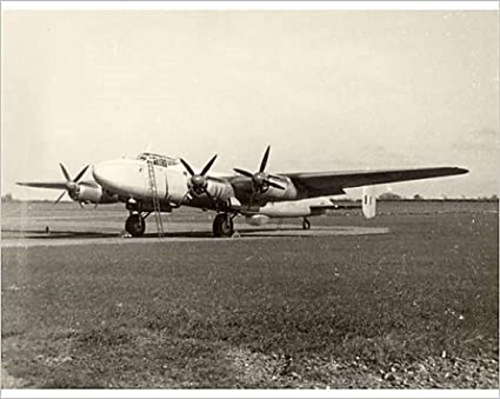 A superb piece of nose art in the form of the Crest of the RAF Flying Training College at Manby and cut from the nose of Avro Lincoln B2, RE367 when it was scrapped in 1953. This Lincoln or Lincolnian as they were sometimes referred to, was named Aries 111 and was used for Advanced Navigational Training. In July 1951 she undertook a flight from Keflavik to Eilson Air Force Base in Alaska via the North Pole.

Accompanied by a hand written letter of provenance and a postcard sized picture of the aircraft (standing outside the hanger, the other two can be found on the internet) the Crest is in very good condition and measures 51cms x 38cms at its widest point. The letter written by its original owner reads:

“This Crest / Badge was removed from the starboard side of the nose cone of the Lincolnian aircraft Aries in 1953.Aries 111 was withdrawn form operational duties in 1952 (a Canberra aircraft was chosen as a replacement and designated Aries 1V)Aries 111 was operated by the RAF Flying College at RAF Manby from 1948 to 1952. The college’s primary role was advanced navigational training. The practical training was carried out using Lincoln aircraft (we also operated, besides Aries, one Hastings and one Valetta aircraft)In 1953 (June time?) a team from the MU at RAF Bicester arrived at RAF Manby. They moved Aries 111 into our hangar and within 10 days had completely dismantled it. The Crest / Badge was removed from the nose cone and brought into our flight office. The lad who brought it in said “we thought perhaps you might like this as a memento”.I took it from the lad and stood looking at it admiringly. To me it was superb artistry for I knew it had to have been painted at the workshops in RAF Manby. Flt. Sergeant Hughes waited until the young lad had left the office then turning to me he said, “you seem to be rather taken with it Corporal, why don’t you have it” “Can I?” I said excitedly “Well (started Sgt. Hughes) I can’t see anyone else wanting it!”This I could just not believe, to me it was so technically beautiful…..and I still think so.It was four or five years before I got round to cutting the badge from its square base shape and then to mount it on what was intended to be a fire screen……which as point of interest I hand painted with a 2” brush.

No record of navigation within the Royal Air Force would becomplete without a mention of the Aries flights. By 1944 RAF navigation training was centred on Shawbury, whose wide remit was reflected in its title as of late 1944 – the Empire Air Navigation School. By then the school was charged, not only with training RAF and allied navigators, but also with carrying out research and promulgating navigation doctrine throughout the Commonwealth.

Many routine training and demonstration flights embraceddestinations as far afield as Canada and Ceylon and the Shawbury fleet included an impressive forty-two Wellingtons and four Stirlings as well as a smattering of smaller aircraft.The conversion of Aries III was to be similar to that of its predecessor.The conversion was made in great haste, and when the aircraft was handed over in October 1948 it still carried the standard bomber colour scheme, with Aries appearing in white on the nose. The next two years saw plenty of routine, but not spectacular flying, although Aries was loaned to the Empire Flying School in April 1949 for assessing the new Calvert runway approach lighting at Heathrow. In July 1949 the aircraft formally moved to Manby, where the RAF Flying College had been formed from an amalgamation of the ‘Empire’ schools.

By late 1950 Aries III boasted a polished metal and white finish and the code FGAW. In October 1950 it set off from Strubby and overflew Heathrow to claim a new London-Khartoum record of 14hrs 23min. Shortly afterwards it made an easterly circumnavigation under the captaincy of Sqn Ldr Downey; the UK-Australia sector took 62 hours and after an extensive tour of RAAF bases the aircraft returned via Fiji, Hawaii, the USA and Bermuda.

Aries III’s last flight of note was back to the North Geographical Pole in September 1952, under the command of Sqn Ldr Lawrence. Aries 111 and the later Aries 1V were largely responsible for establishing the long range commercial routes of today.

A beautiful display piece with a fascinating history. 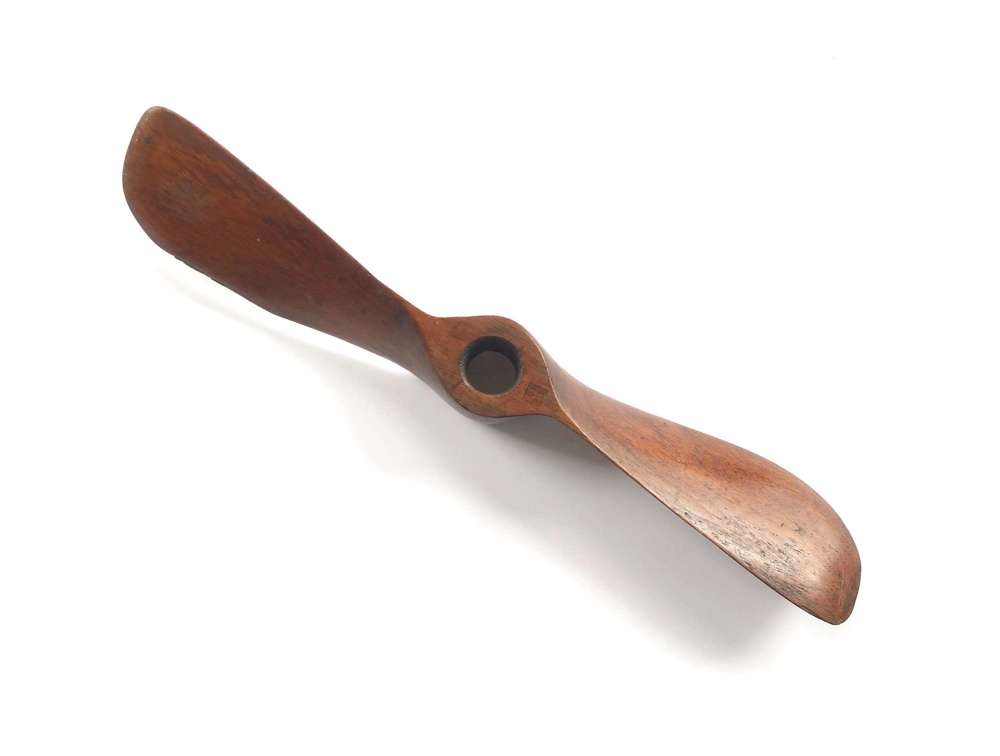 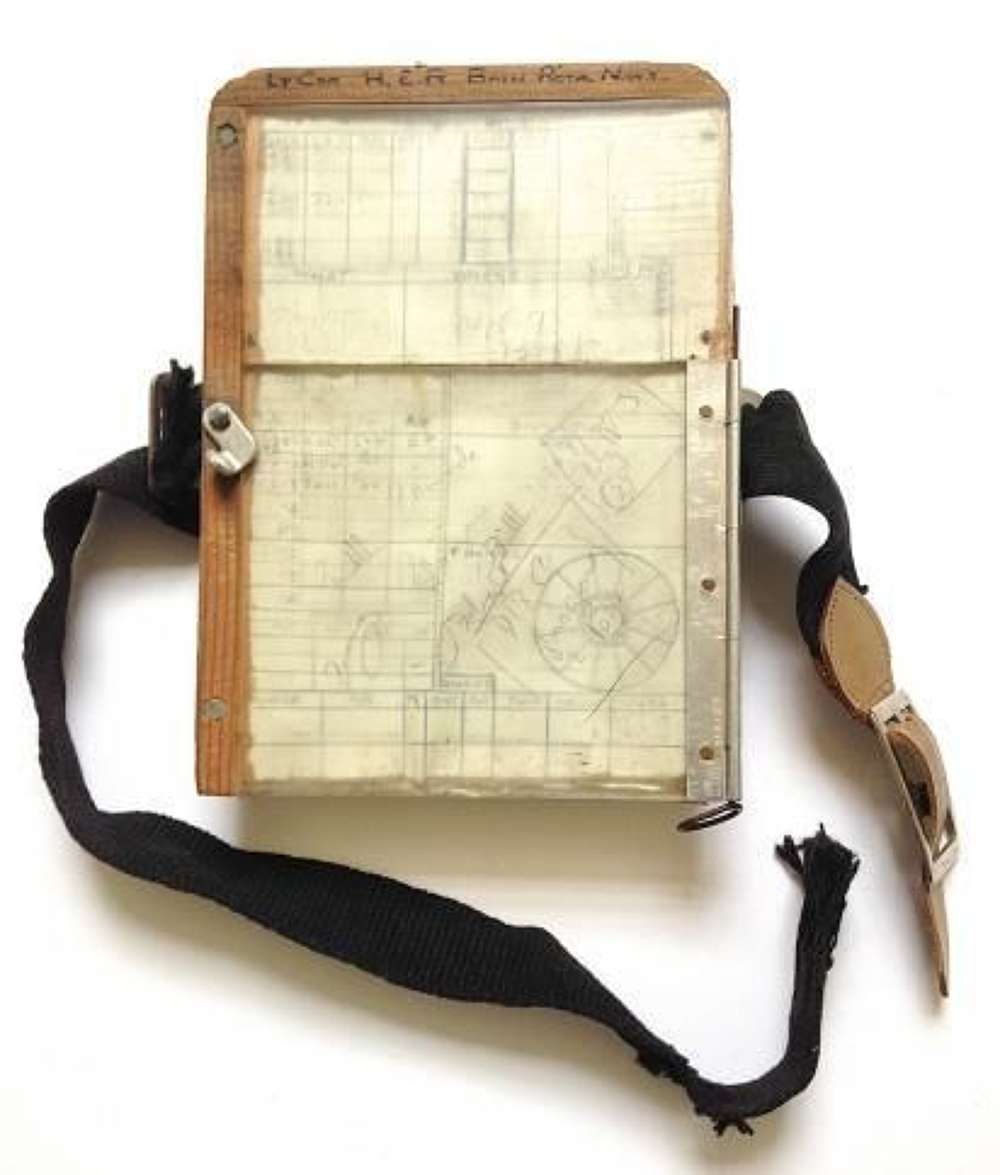 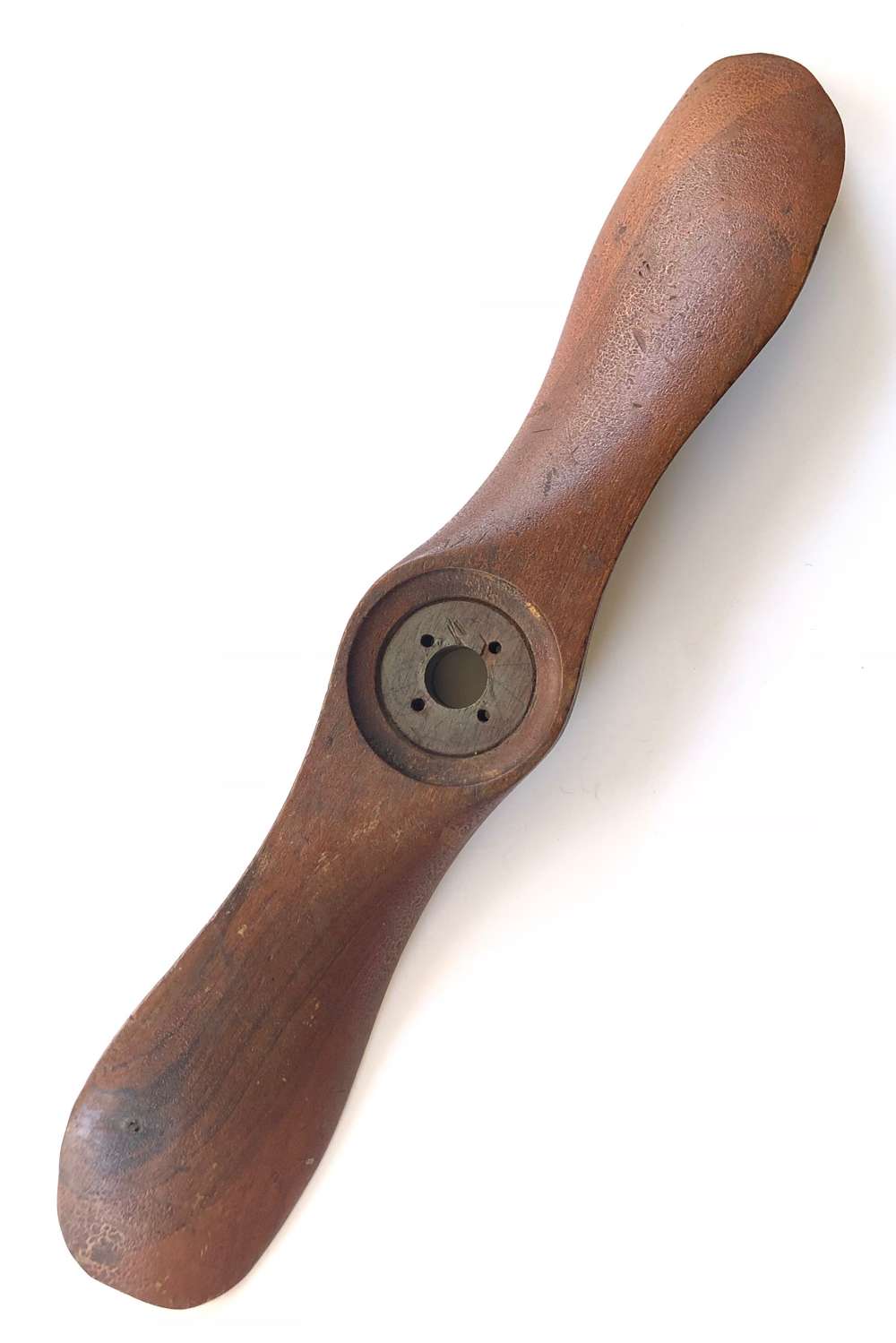 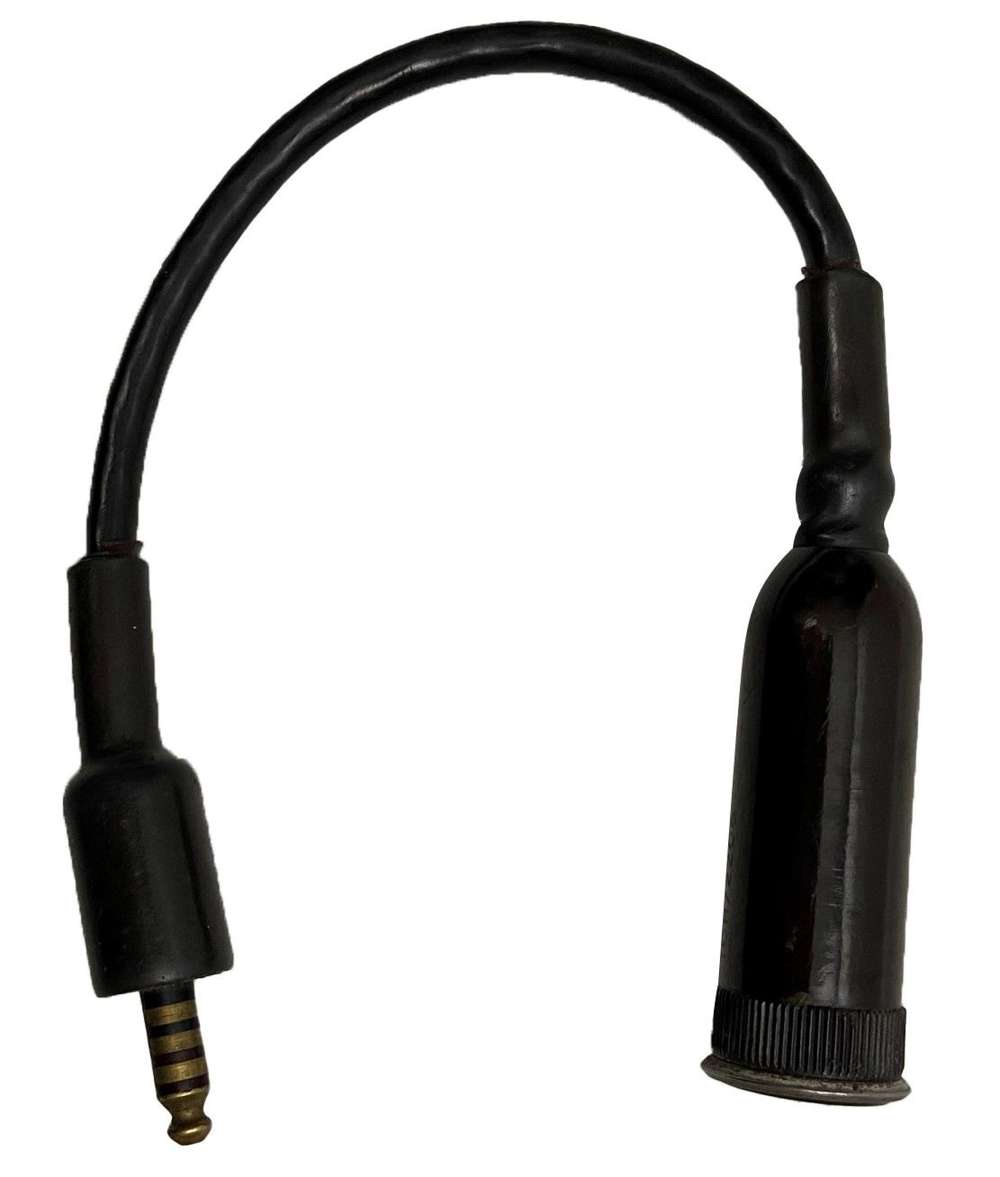