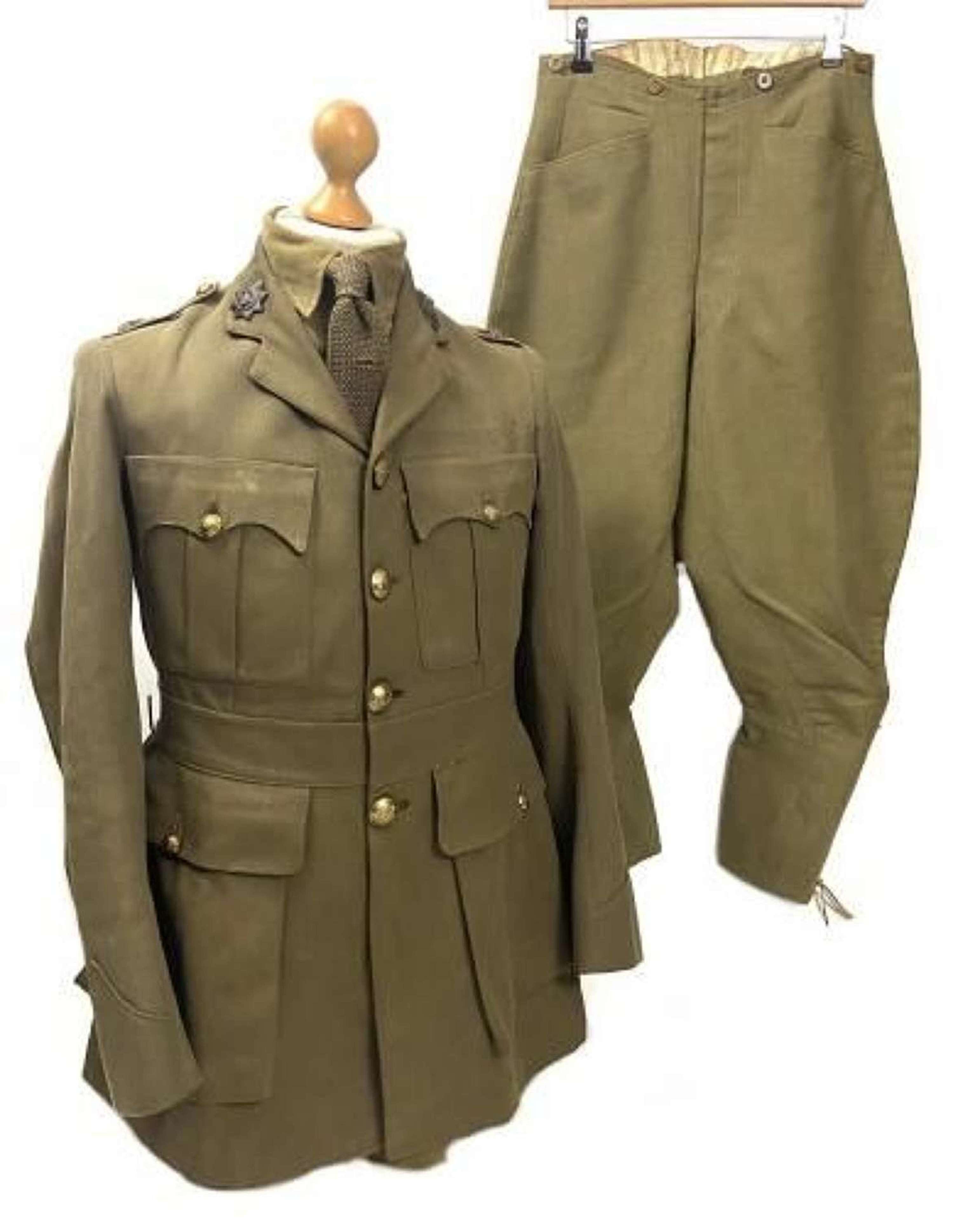 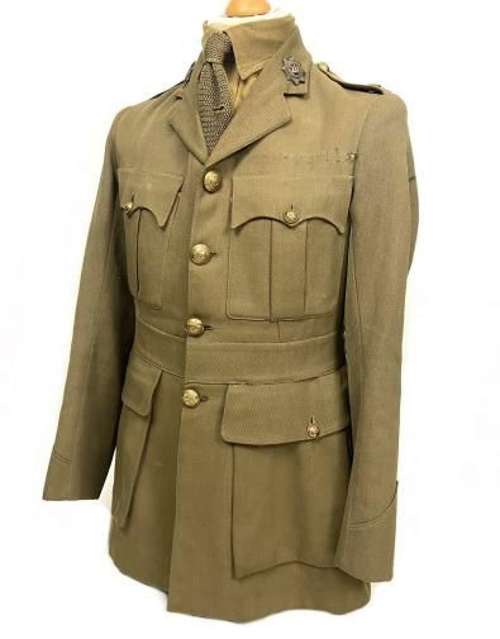 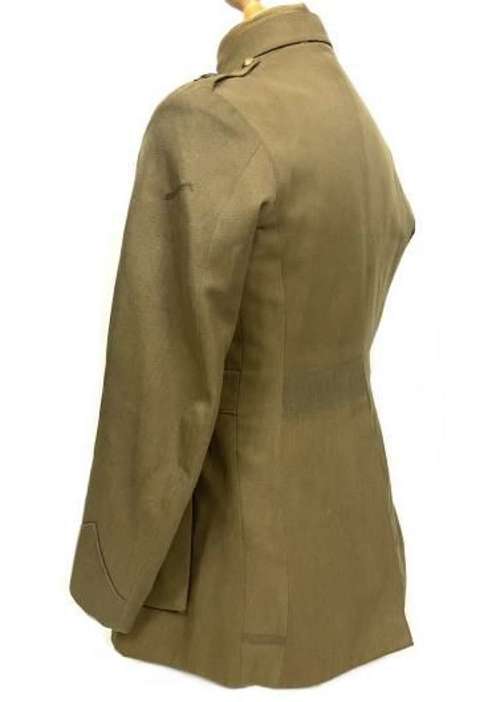 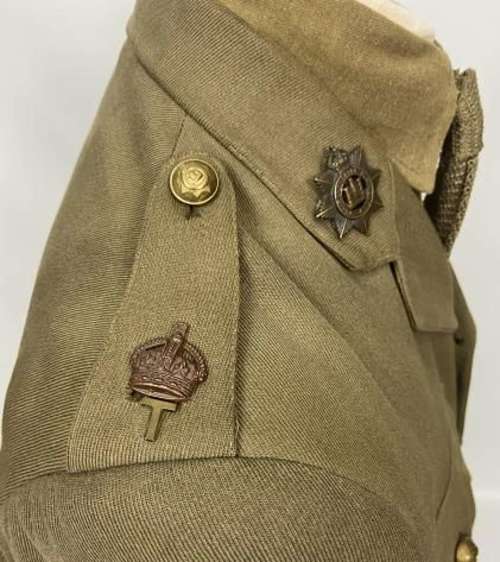 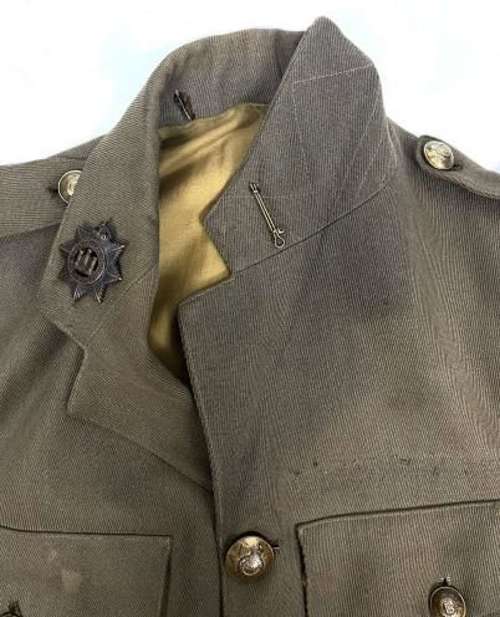 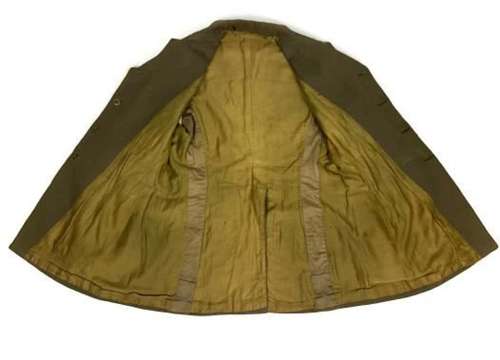 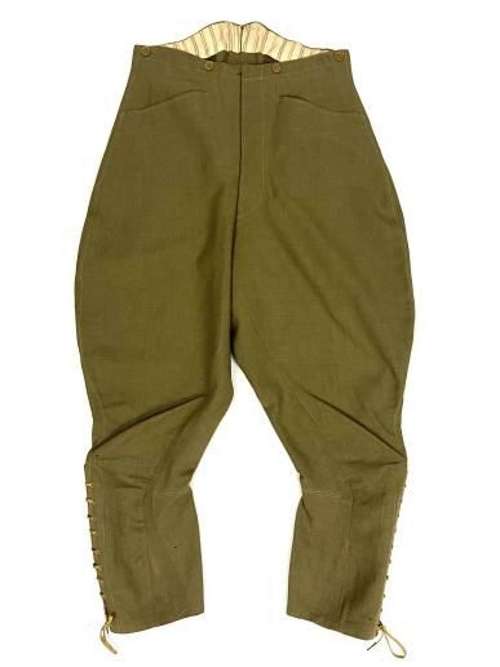 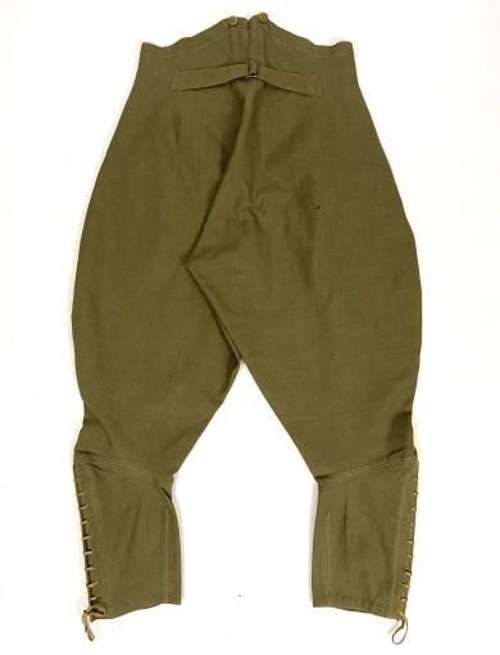 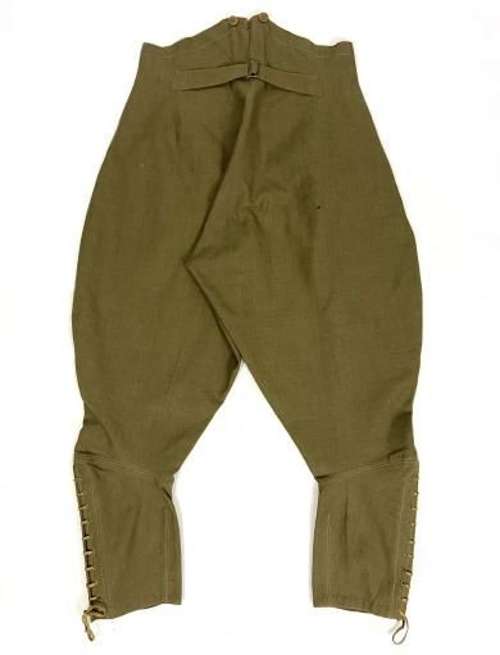 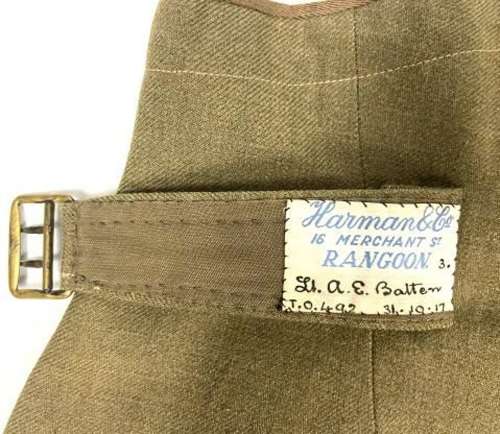 An original First World War British Officers Service Dress Tunic and Breeches to an Officer in the Devonshire Regiment.

This uniform belonged to Alfred Edward Batten who served in the ranks with the 1/4 Devons as an acting Warrant Officer Second Class before being made up to a Second Lieutenant and transferring into the 1/4 Border Regiment. He transfer back into the Devonshire Regiment in the immediate post-war years being made Major in 1932.

The details of Alfred Batten's Military career are included with his uniform and tie in very well the articles themselves. The Tunic is of typical First World War construction featuring an integral waist belt and featuring a long skirt. This was clearly the first, and I assume only, tunic which he had as it was clearly let out in the inter-war years, as can be seen by the panels let into the side seams of the jacket. This alteration has clearly been professionally done in the inter-war years and is more obvious to see on the interior where the 'new' lining material is mismatched. Sadly this alteration meant that the rear part of the integral belt was removed leaving a shadow to show where it was previously affixed. Of course, this would not have been much of an issue at the time as it would be covered by a Sam Brown belt.

Another nice feature of the jacket which ties in well with the history can be found in the epaulettes. Whilst on first inspection they appear to be a good match, and therefore original to the tunic they are not. When the lapel is turned back to reveal the true original colour of the tunic, it is much darker meaning that the epaulettes are a later addition and were fitted when Batten was promoted to major. This was commonplace as the epaulettes would show holes of where the captains pips had previously been attached which looks untidy.

The tunic features Officers quality bronzed Devonshire Regiment collar badges and matching buttons. The epaulettes feature bronzed Major's crowns as well as matching 'T' badges denoting a Territorial battalion. There is clear evidence of where medal ribbons were fitted although they have been removed at some stage. There is also a shadow following the line of the sam brown belt which shows how much this was worn in direct sunlight! There is another mark to the left sleeve.

The buttons on the jacket are all held on with split rings with the shank of the button passing through a puncture hole which has been crudely hand stitched. This was a popular conversion for men in the Trenches during the Great War and is typical of a man who has been made up from the ranks.

The breeches are a fantastic example. Not only are they in good condition but they have a beautifully clear date. Whilst the tunic clearly saw heavy use over a large number of years, the breeches appear to have seen only limited use and it is most likely that the original owner had another, more favourable pair or indeed wore trousers. The waist size of the breeches is much smaller than that of the re-tailored tunic so he obviously never wore them after he put on weight.

The breeches are of typical Great War construction with a high rise waist, voluminous thighs and tight fitting around the calfs. They fasten with buttons at the front with more buttons for braces whilst the calf openings fasten with laces. They are cut from a lightweight khaki whipcord with this being the popular colour in the latter part of the War.

The rear of the breeches features a chinch-back belt and buckle arrangement as was commonplace in the Edwardian period. To the reverse of the buckle side is a label which states the makers name as 'Harman & Co 16 Merchant Street Rangoon'. The original owners name has been marked in ink and reads 'Lt A. E. Batten' and the date of 31.10.17 is clearly visible. The buckle is typical of the time being a black painted brass example with the words 'Solide' and Paris' engraved into it.

The breeches are in great condition with very little signs of wear or use. There is a hole to the seat and a limited amount of staining but overall the display very well.

It is most likely that these two piece were made at the same time with the jacket seeing sustained used whilst the breeches were left to languish. The Jacket features hand stitched button holes and removable buttons which would both suggest to me that it is also theatre made.

Altogether a nice original Great War uniform set with evidence of post-war use. This would be ideal for someone specifically interested int he Devonshire or Border Regiment and there is certainly room for further research!

More pictures are available upon request. 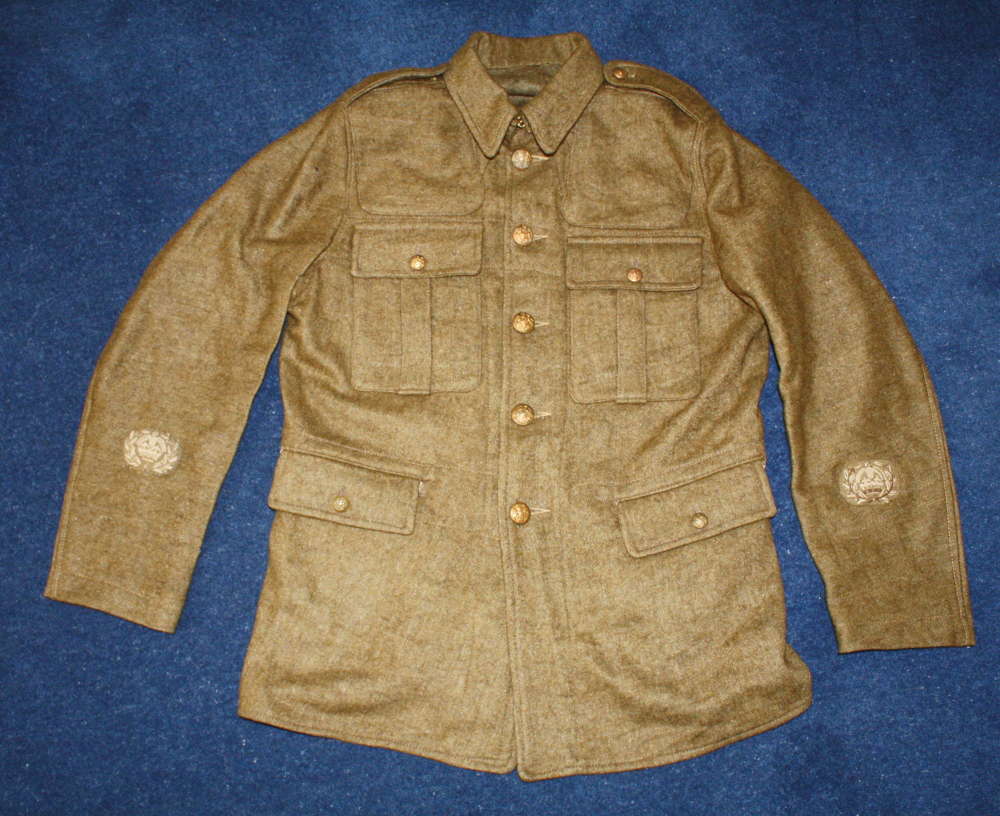 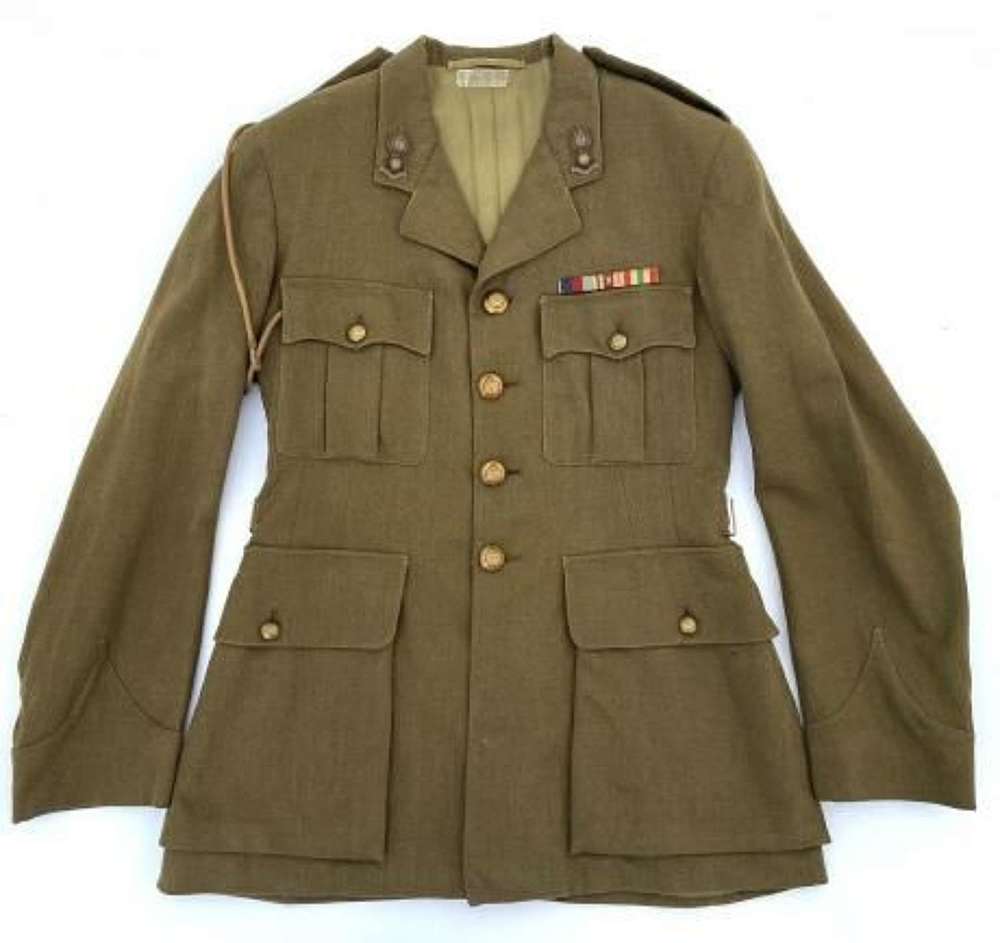 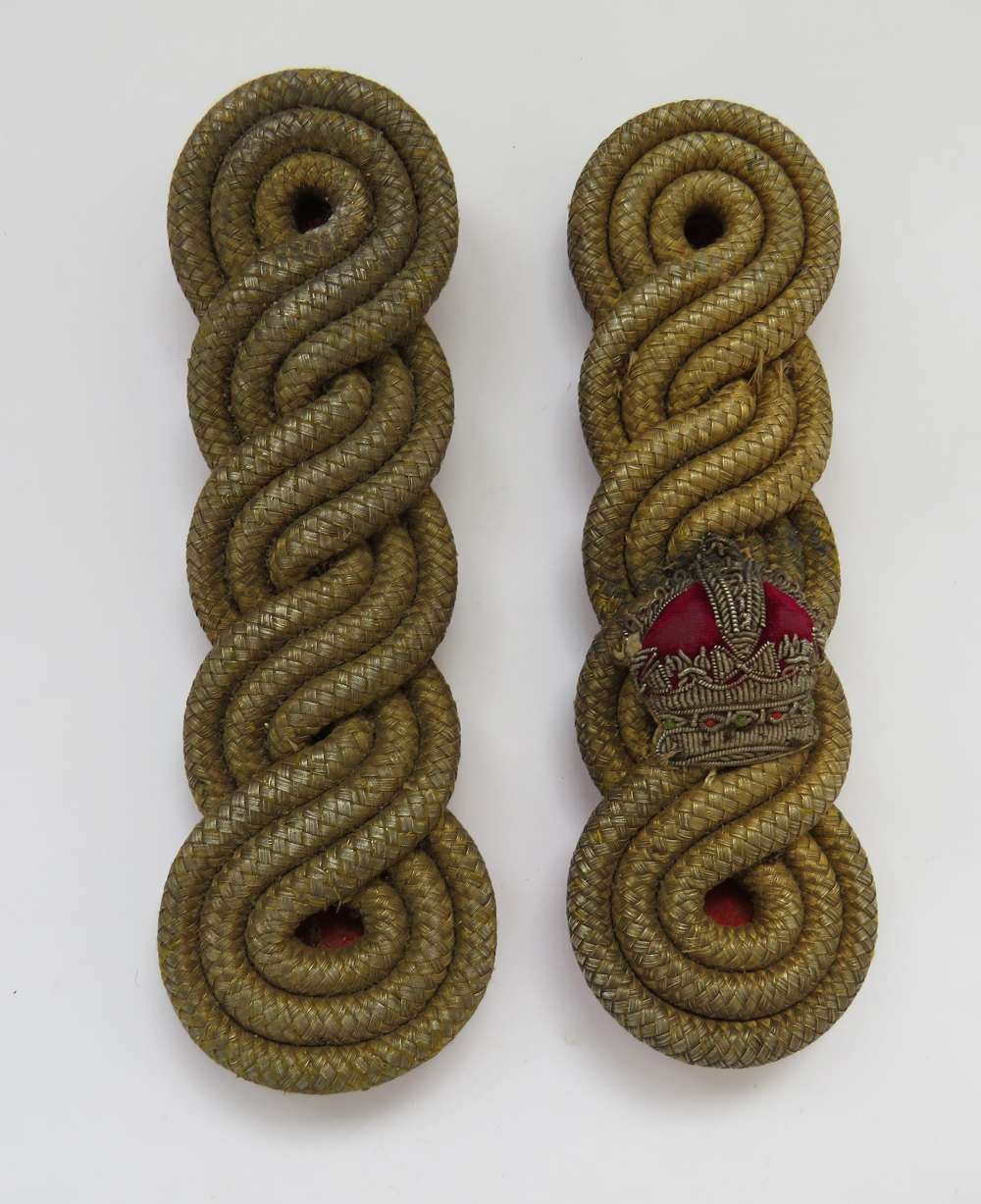 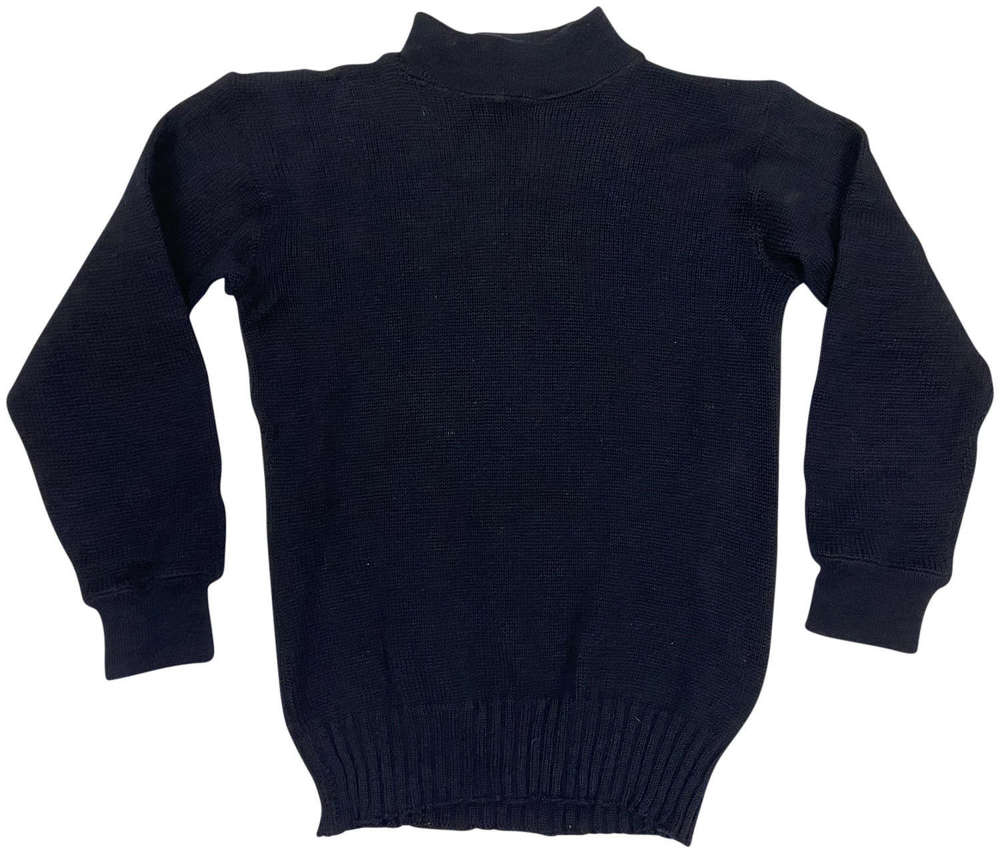 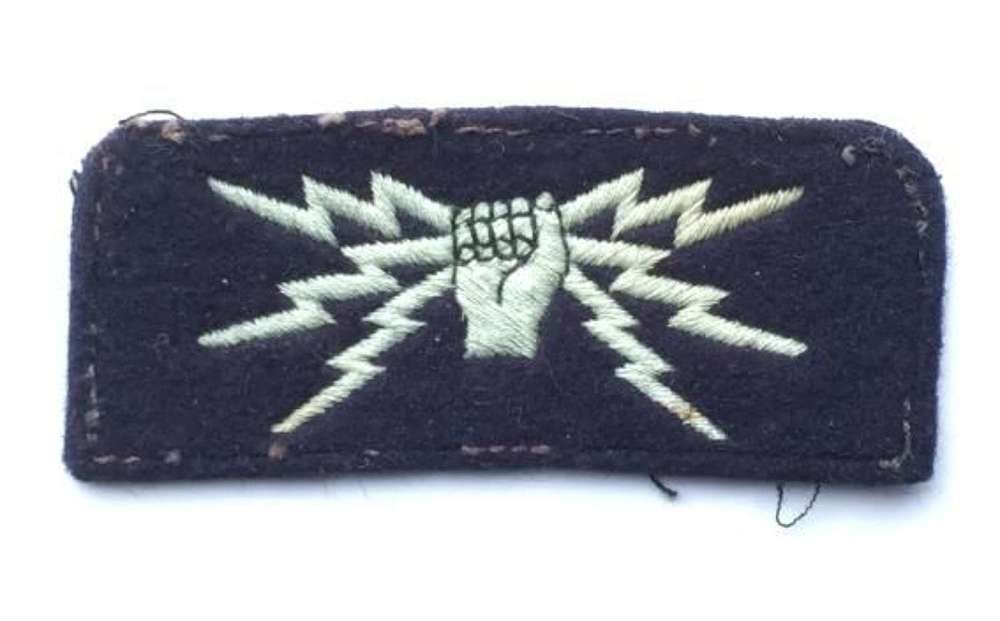 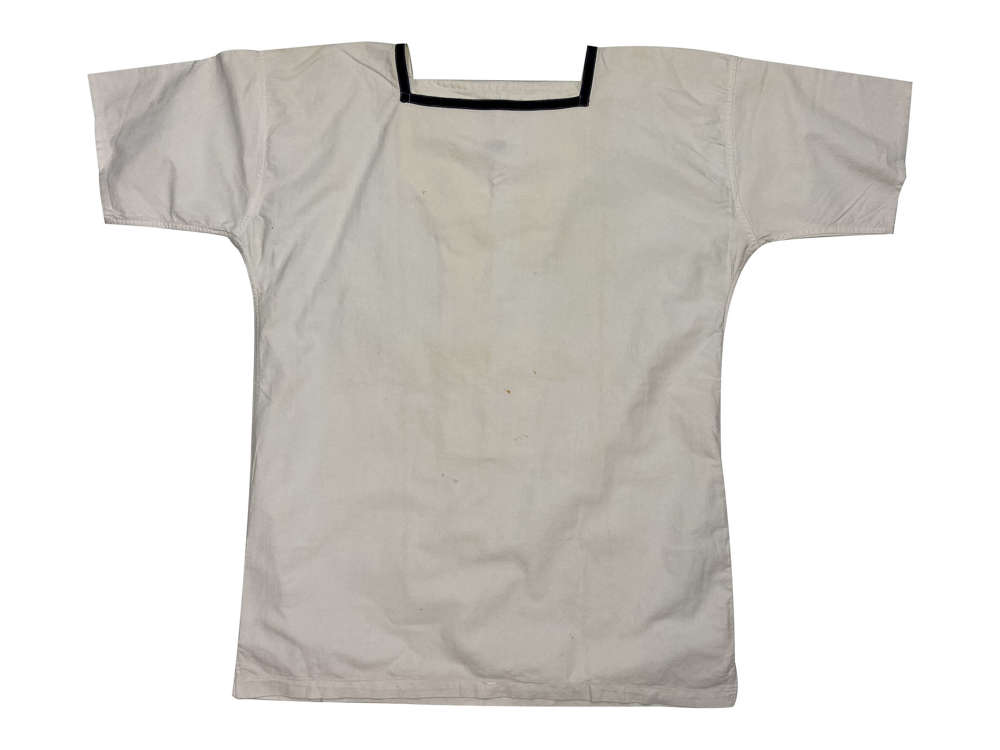 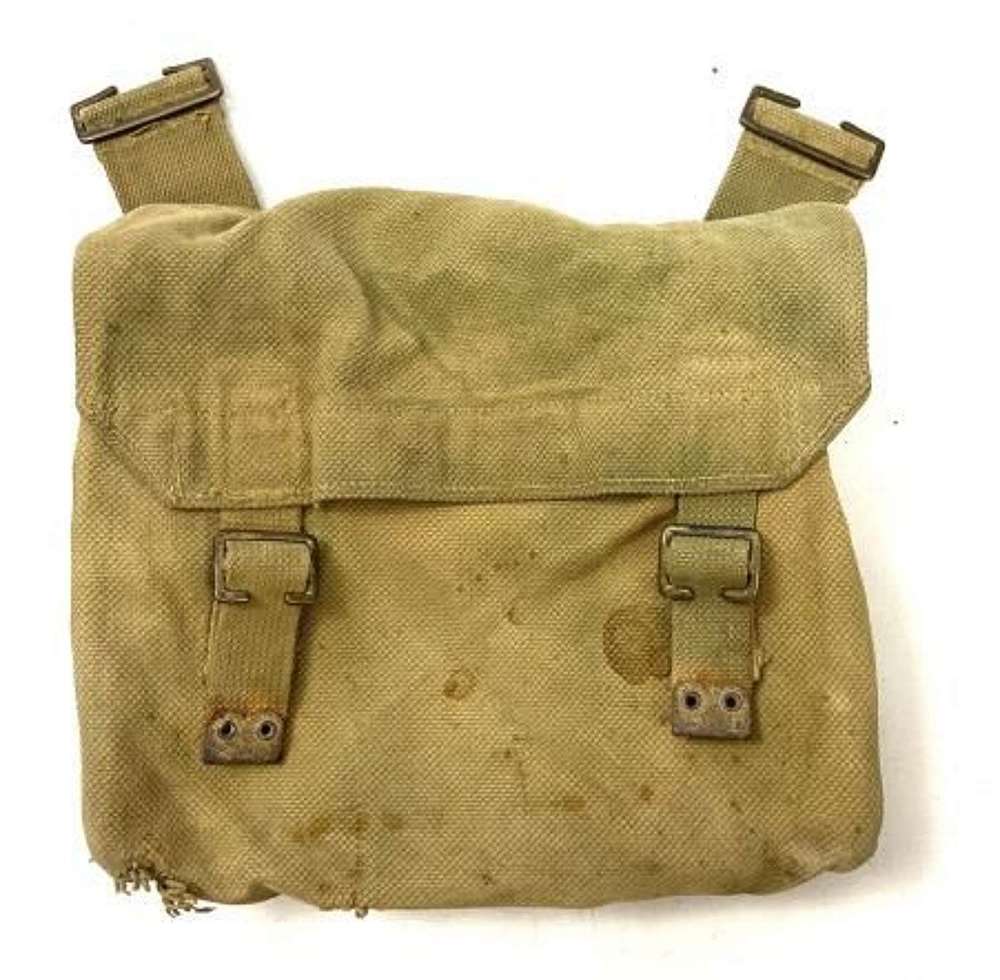