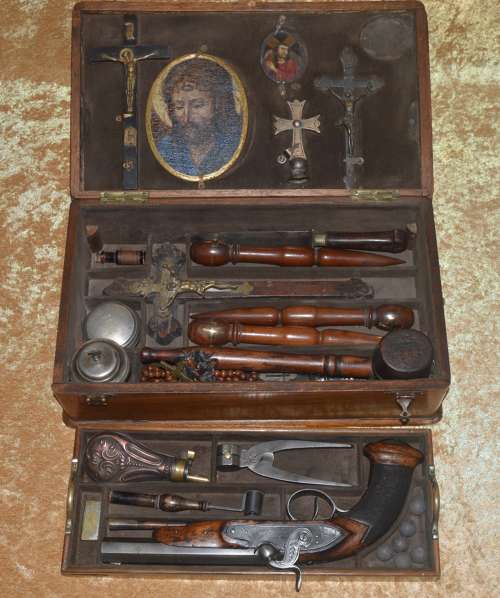 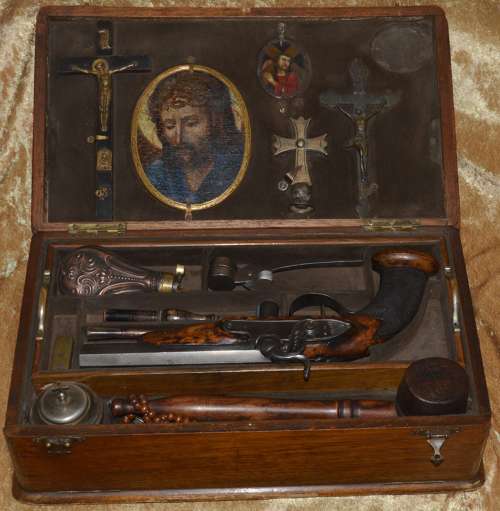 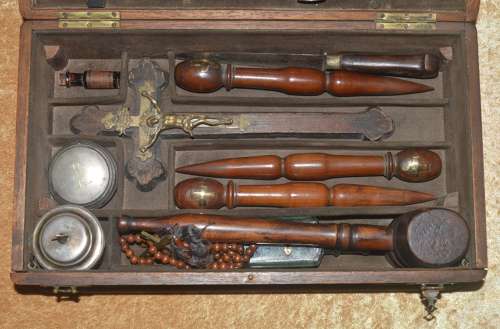 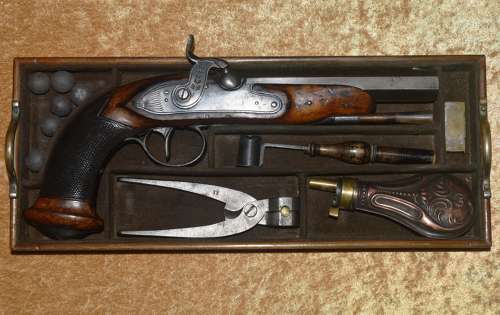 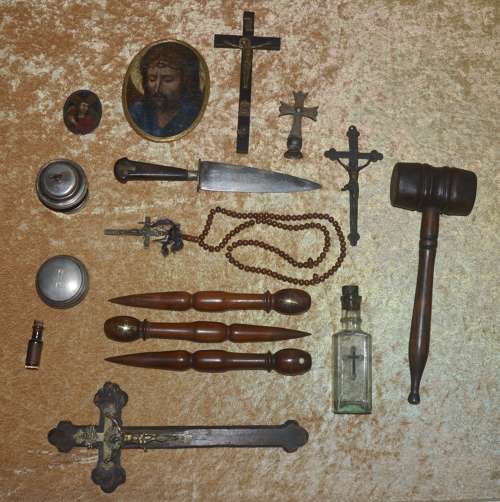 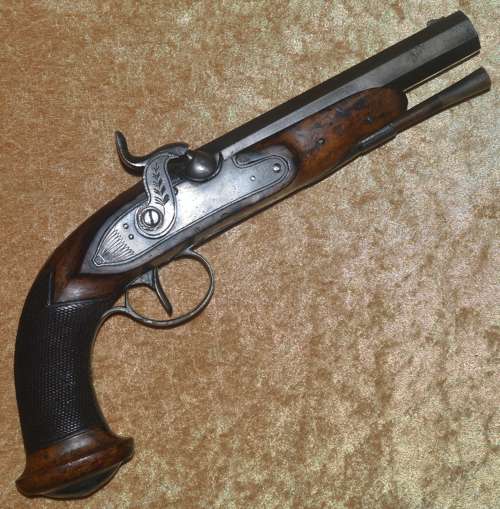 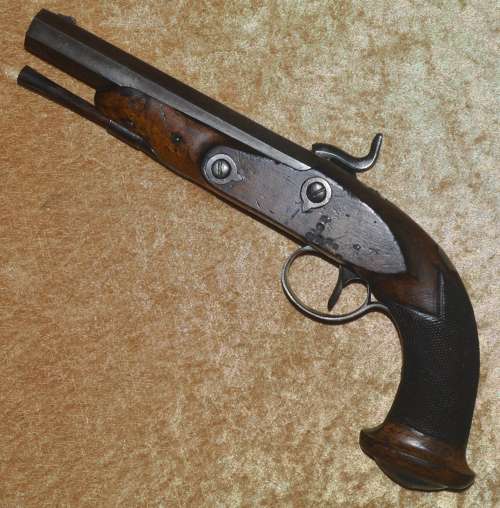 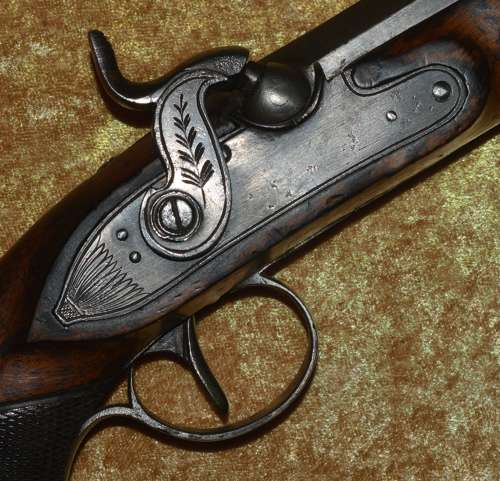 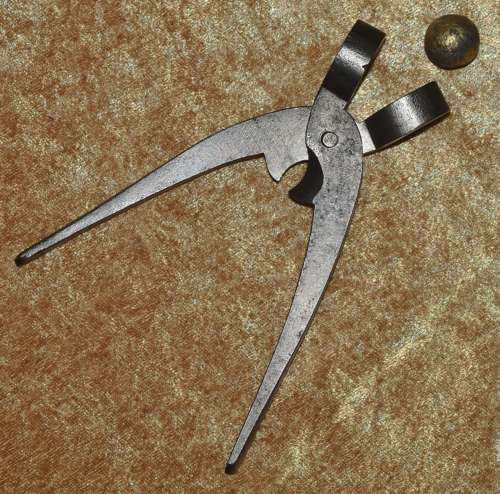 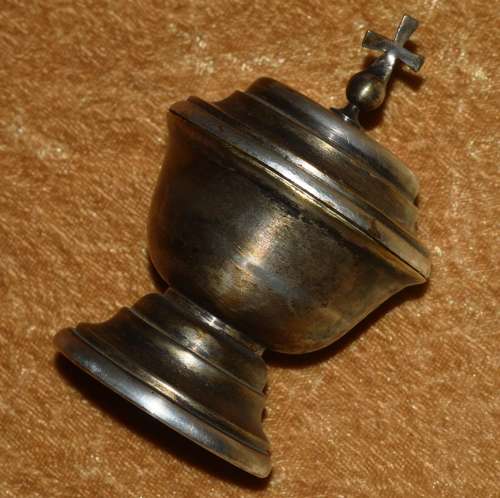 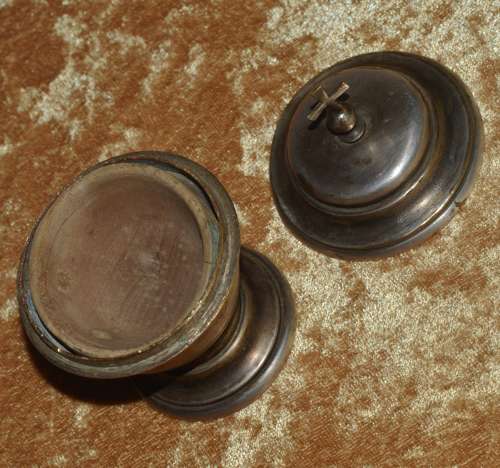 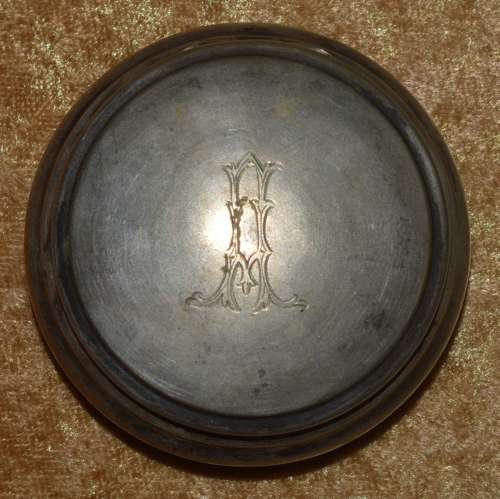 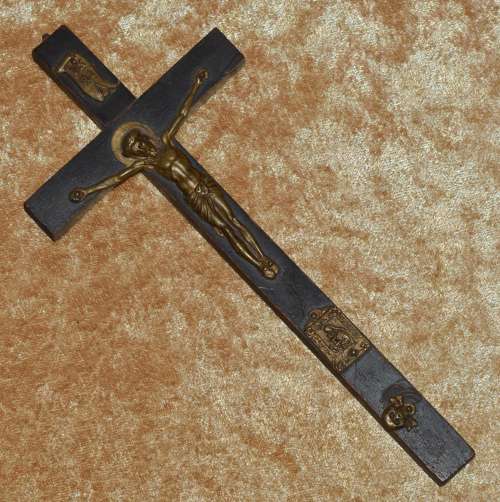 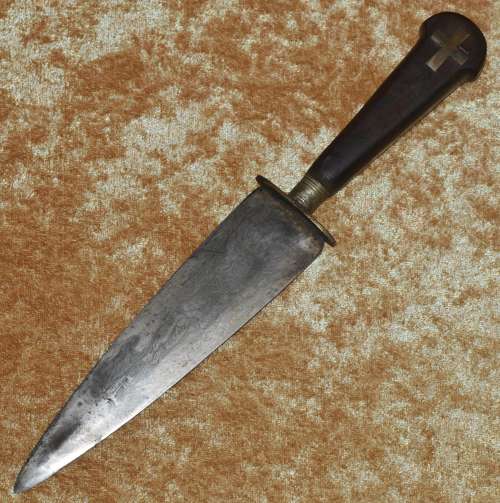 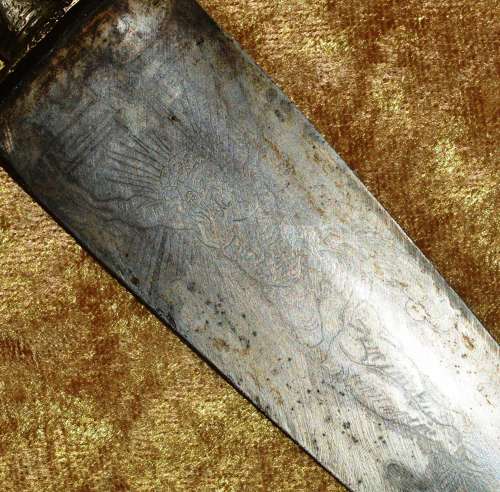 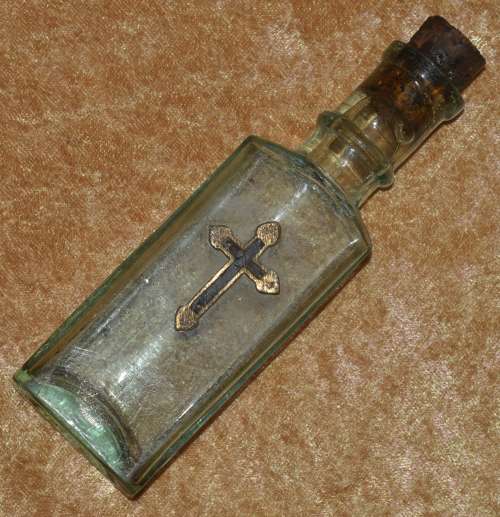 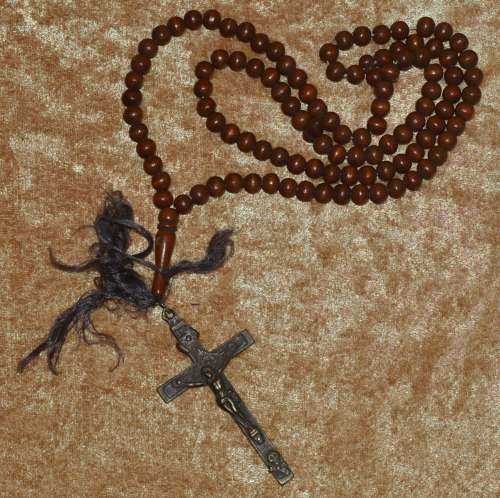 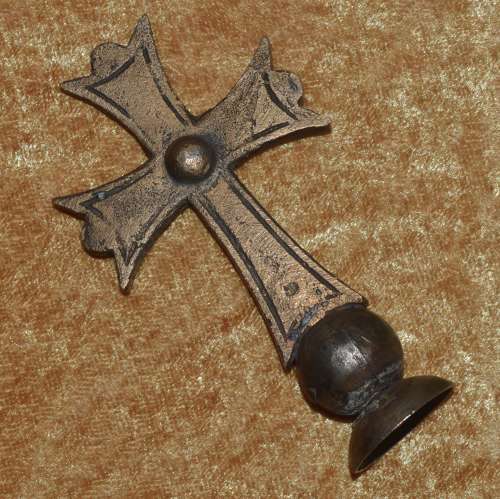 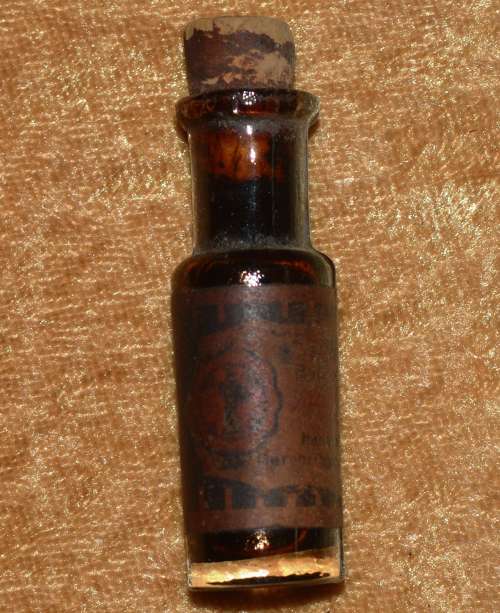 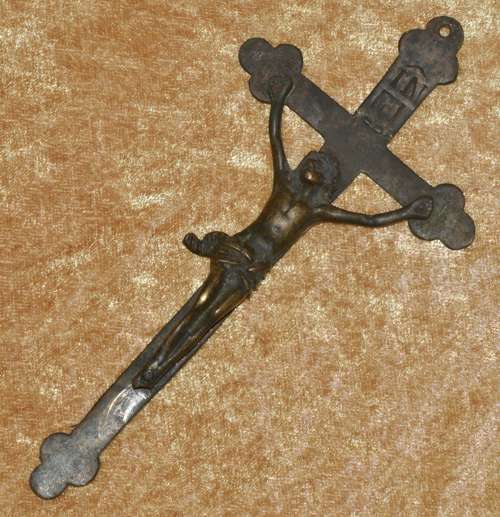 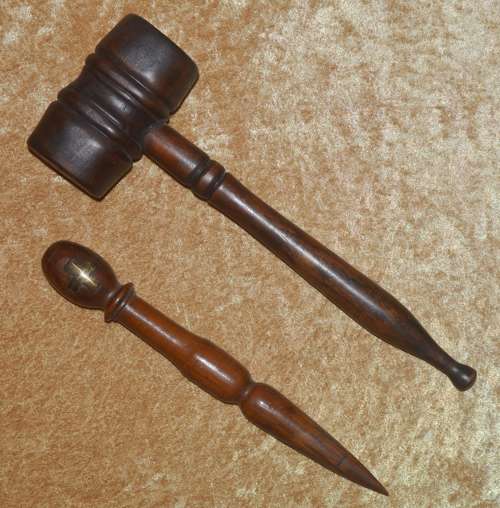 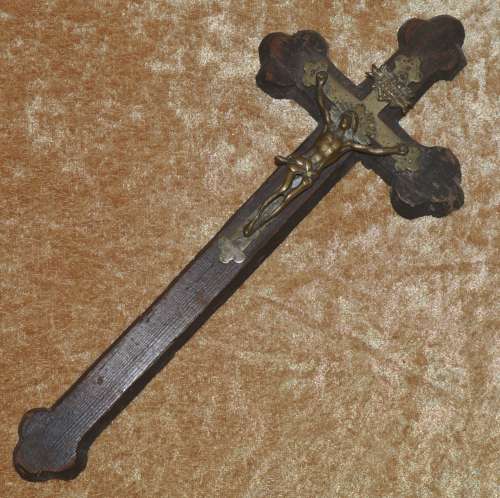 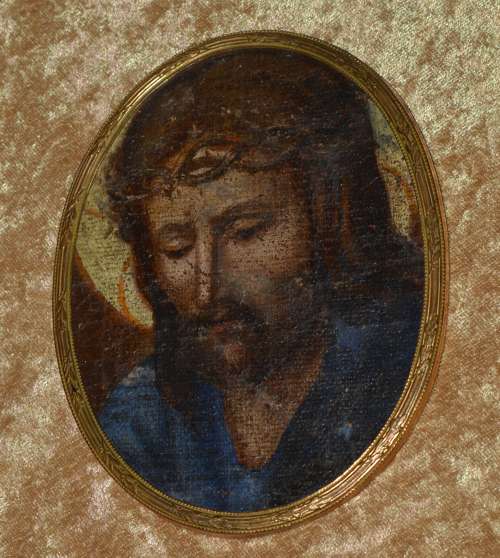 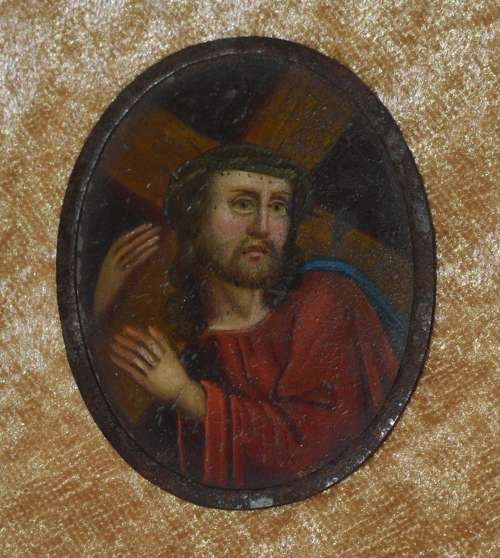 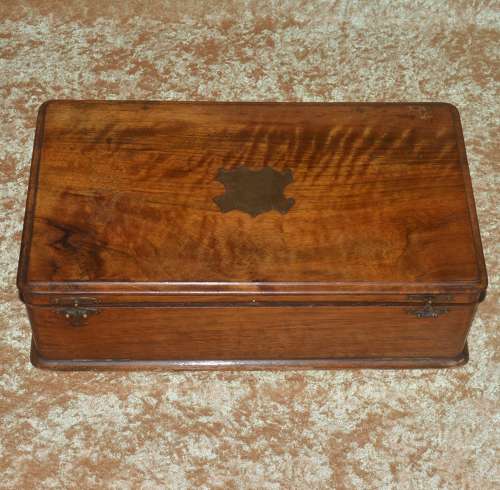 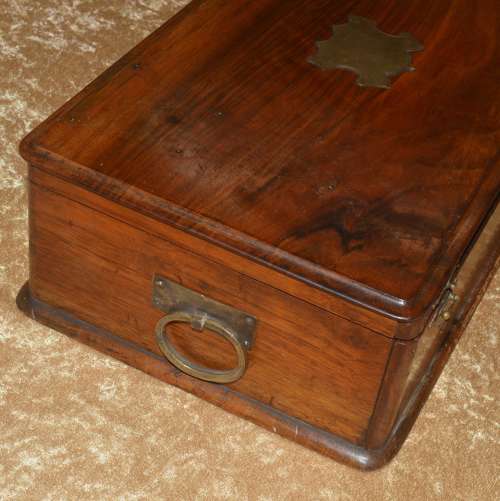 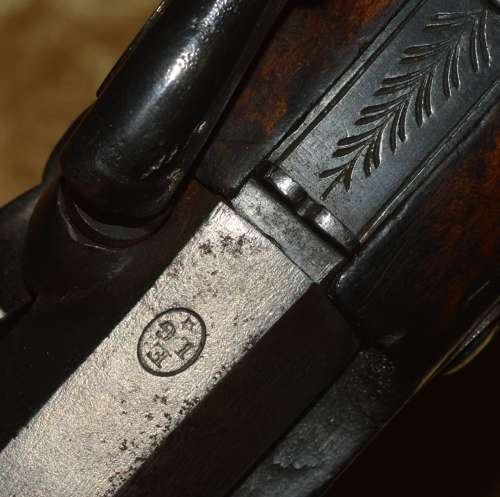 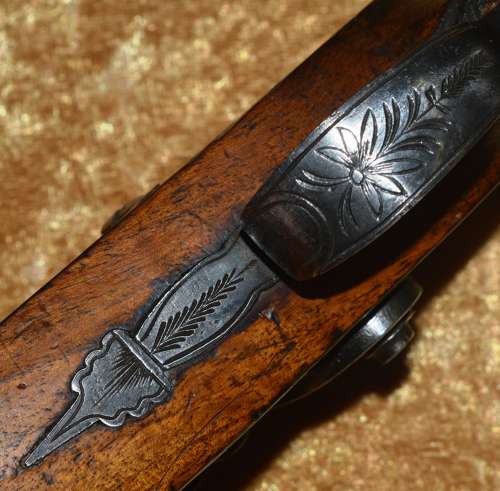 ﻿The complete kit consists of a bottle of holy water, four crucifixes, wood rosary beads with
cross, paintings of Christ, wooden mallet with three wooden stakes (each with inlaid brass
cross), lidded silver chalice with cross on the lid and wood cup insert (probably to contain
the host), round hinged silver container with script monogram on the lid,  knife with inlaid
brass cross on the handle and blade decorated with etching of Christ on the Cross,
percussion pistol with Liege proof mark and horn-tipped wooden ramrod, brass percussion
cap box, powder measure, iron bullet mold, copper powder flask, cast round lead bullets
(one apparently silver-plated), etc. in a fitted felt-lined walnut case with numerous
compartments and fall-out front panel when lid lifted and hooks detached. Case lining
shows age and wear, some latches replaced.  Contents show age and wear and all appear
to be 19th C or earlier.  Probably English, kit assembled 2nd half 19th century.  15 3/8" long
by 8 5/8" wide by 4 3/8" high.  In our more than 20 years of business we have only
encountered a handful of such kits, none of which have been the same.  Other kits have
appeared on the TV shows “Pawn Stars” (where the kit ultimately sold for $25,000 after the
show) and “Auction Kings”.

While today most people might think of vampires as something from imagination, folklore,
and Hollywood, with no basis in fact, this was not the case in 19th Century Europe.
Whether they were ever used or not, vampire killing kits were actually assembled in the
19th C and were not intended merely as a curiosity.  When Bram Stoker first wrote his
famous novel “Dracula” (released on May 26, 1897), it was not originally intended as a
work of fiction.  His research began in the summer of 1890 and he was collecting
information on actual occurrences.  In the original preface, which was published in “Makt
Myrkanna”, the Icelandic version of the story, Stoker included this passage: “I am quite
convinced that there is no doubt whatever that the events here described really took place,
however unbelievable and incomprehensible they might appear at first sight. And I am
further convinced that they must always remain to some extent incomprehensible.”  He
also claimed that many of the characters in the novel were real people, some of whom
actually became his friends, whose testimonies he never doubted.  However, when he
presented the original manuscript to his editor, Otto Kyllman, of Archibald Constable &
Company, it was returned with the single word “no”.  Kyllman believed that with the recent
unsolved Whitechapel murders (of Jack the Ripper fame) its publication might lead to mass
hysteria.  In order for the work to be published, many of the events would have to be
omitted and it would need to be rewritten and presented as a work of fiction. In the final
version the first 101 pages had been cut, many alterations had been made, and the

epilogue had been shortened, changing Dracula’s ultimate fate and that of his castle.

Other items in Misc

View all in Misc