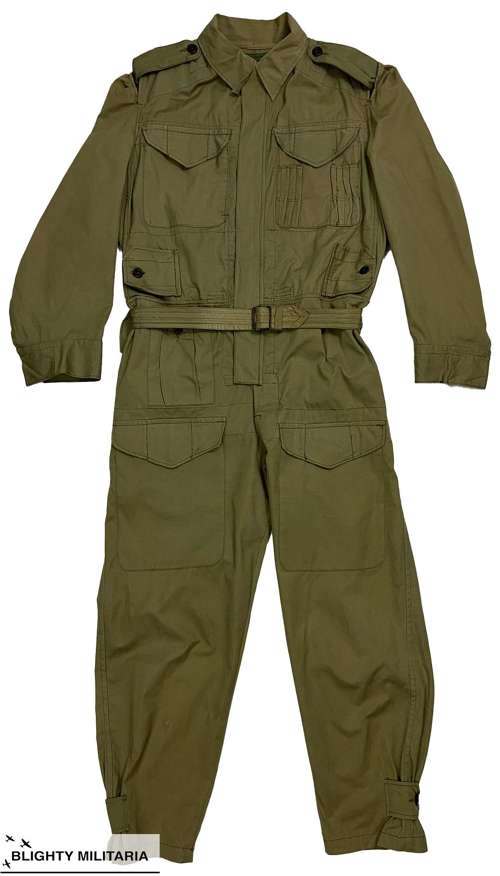 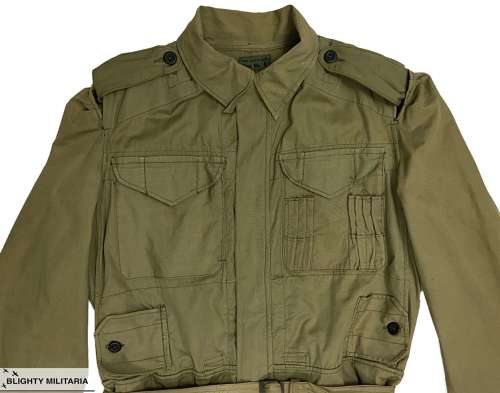 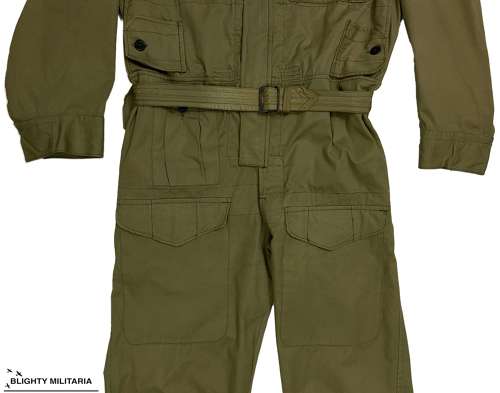 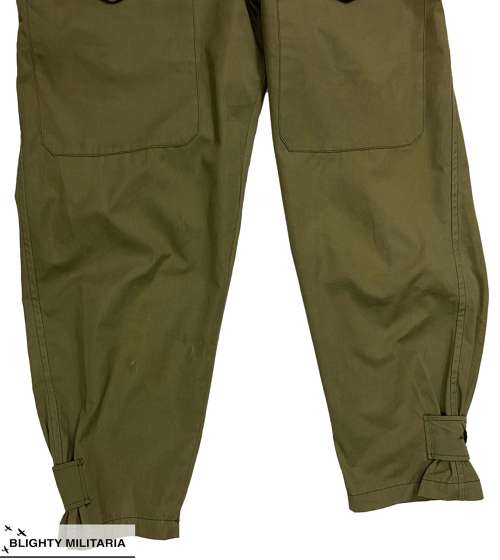 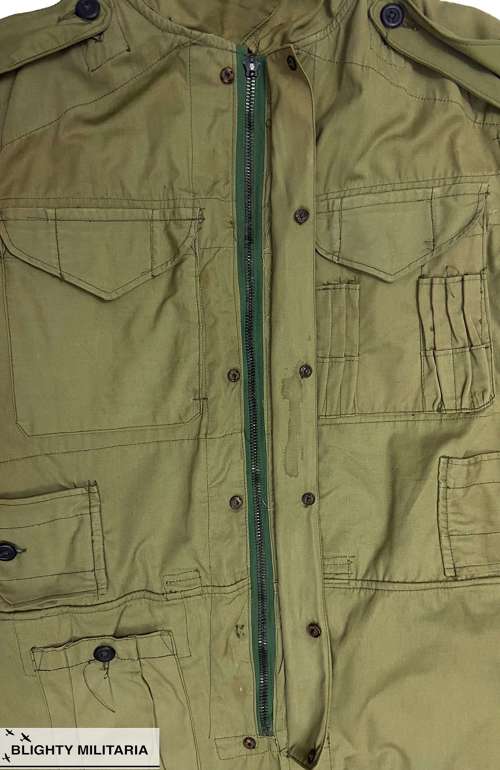 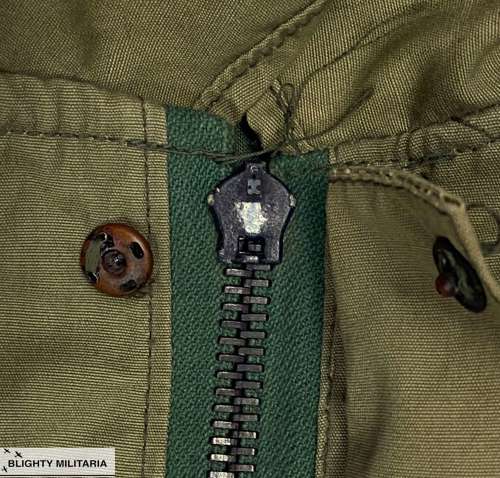 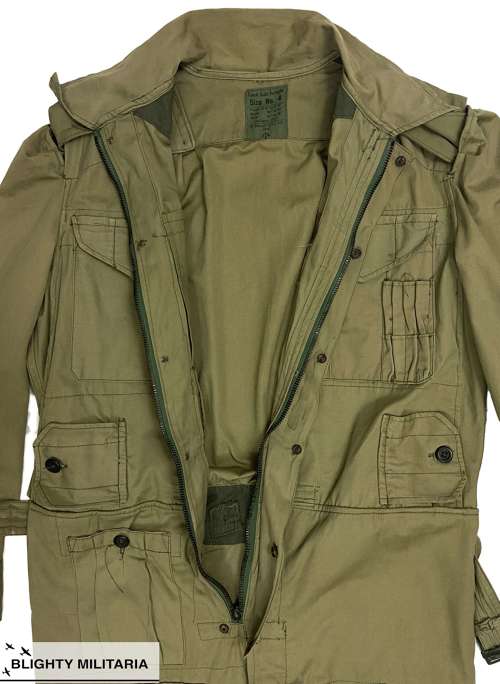 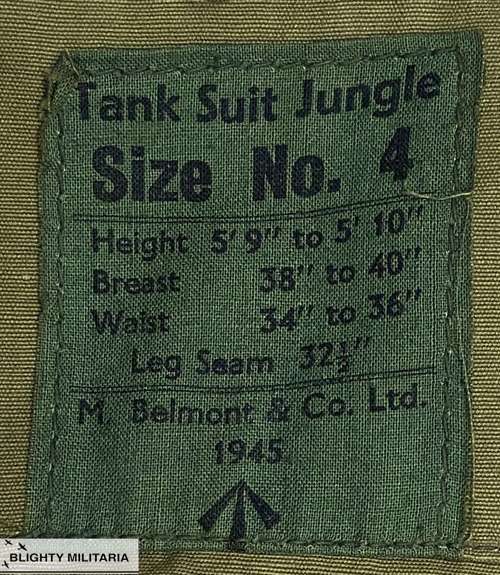 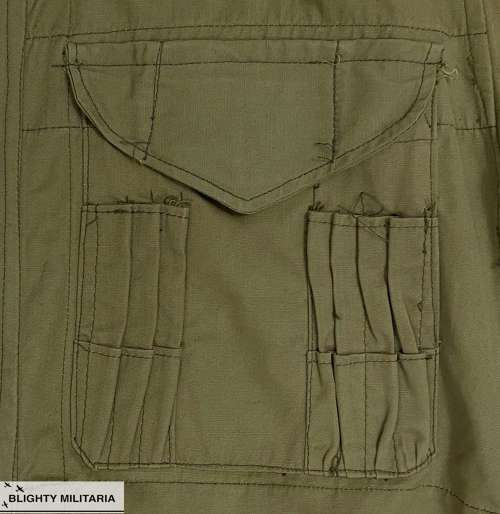 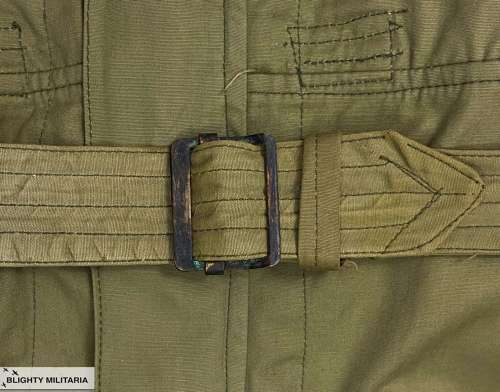 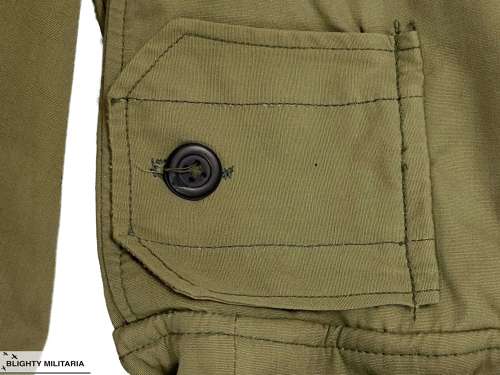 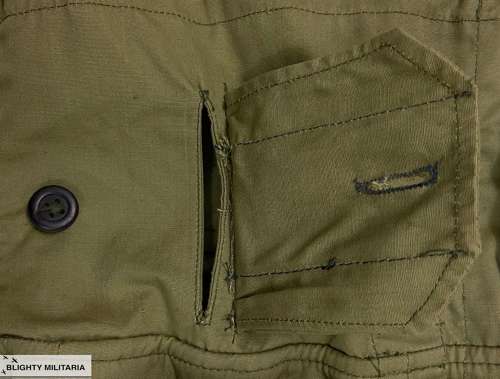 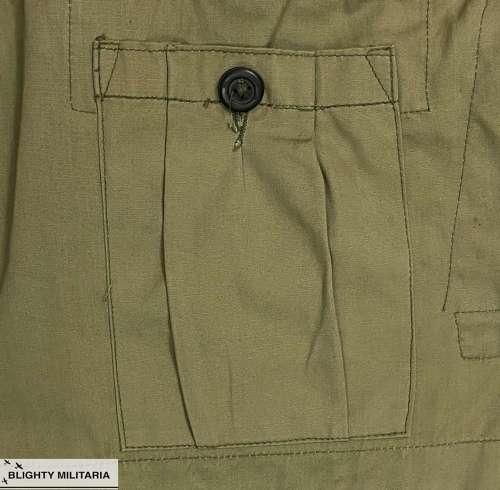 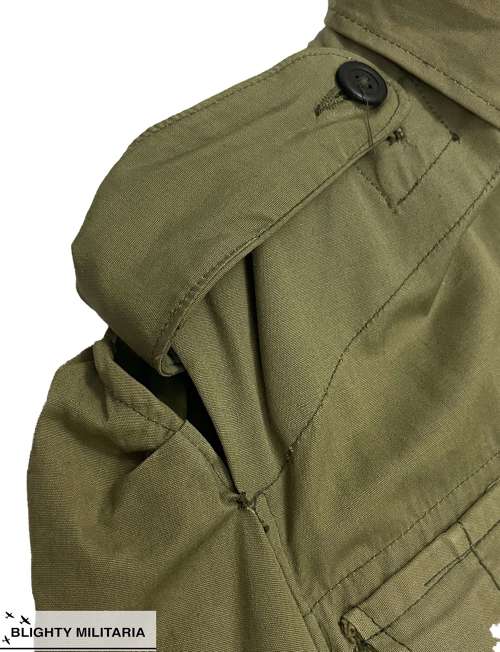 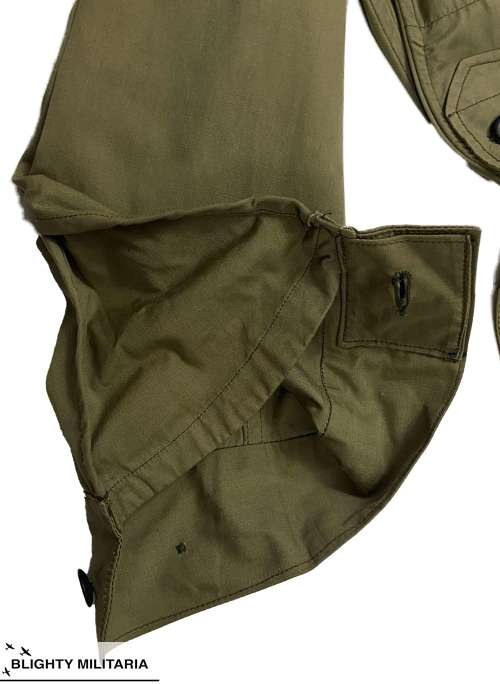 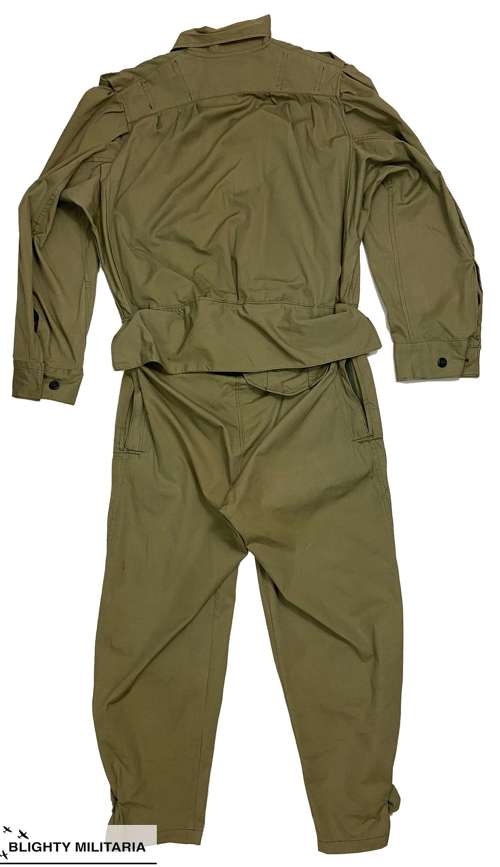 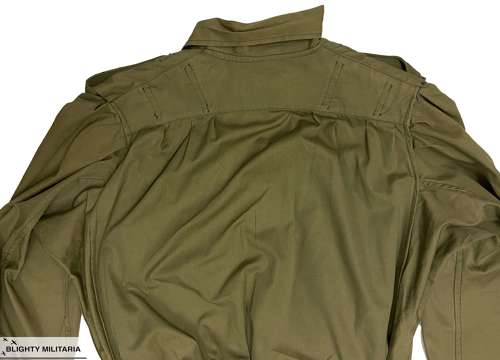 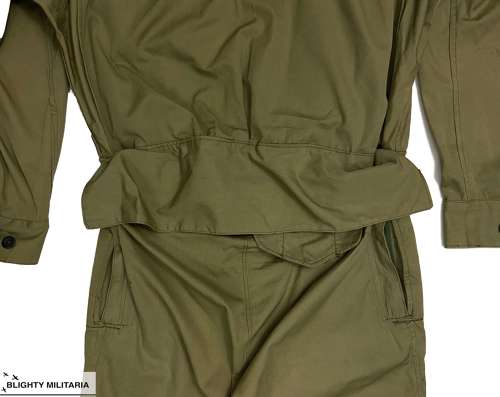 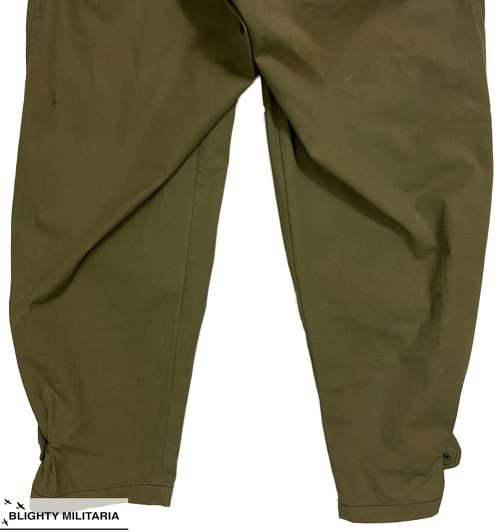 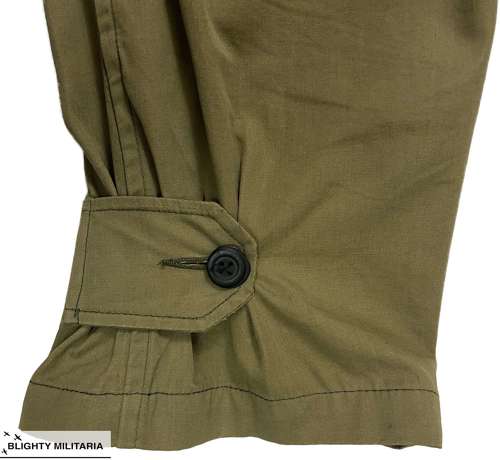 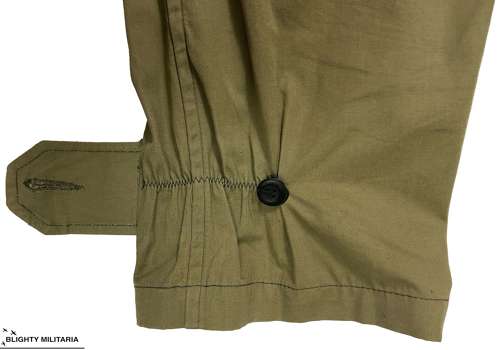 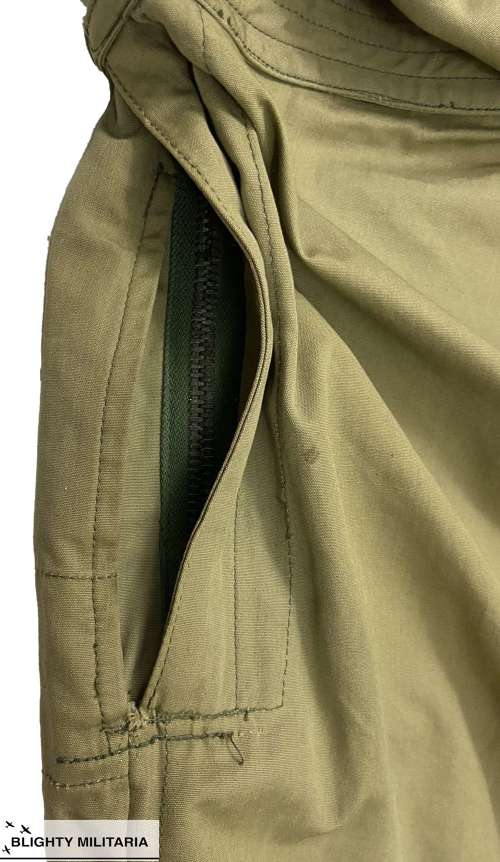 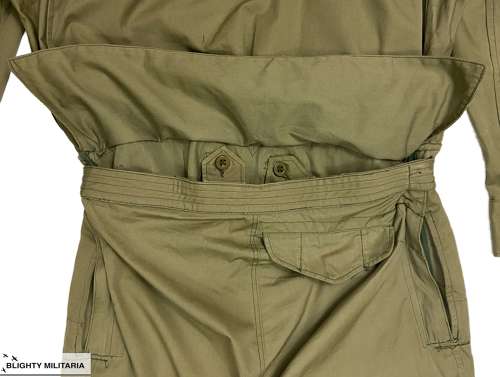 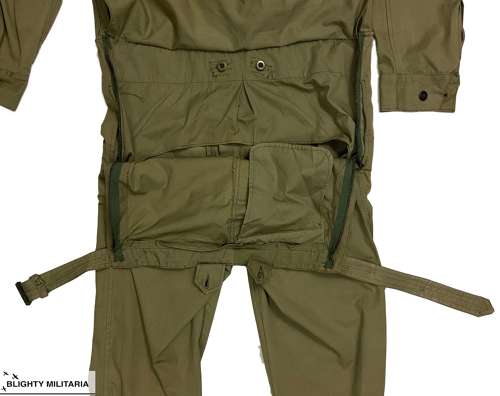 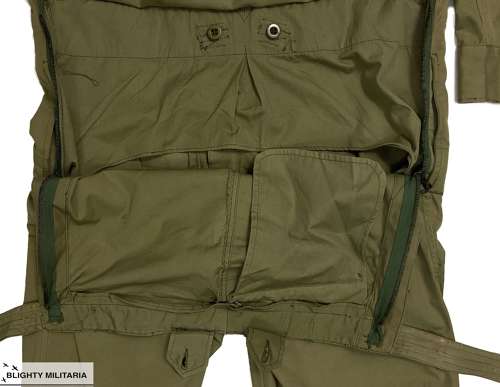 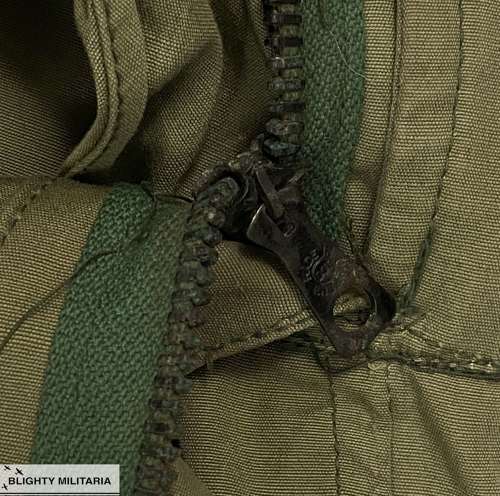 A rare original 1945 Dated British Army Jungle Tank Suit in a size No. 4 and in nice condition.

This pattern of suit was designed for use with tank crews in the Jungle and was introduced in 1945. It shares many of the same details found on the denim tank suit but is a design which is completely unique. It is cut with extra room in the chest and the waist belt is dropped lower, giving it an interesting shape which is best seen in the first picture. The suit features flapped chest pockets as well as flapped thigh pockets which are the same as seen on the denim suit, down to the pen pockets on the outside of the left breast pocket. There is also a first field dressing pocket which is again a common detail between the two suits.

The suit is made from a lightweight poplin collar which is well suited to tropical climates. There are openings at each shoulder to allow for ventilation and two more opening flaps at the waist. The end of each trouser leg features a button and tab, behind which is an elasticated section. This is designed so that the wearer can wear the trousers bloused over the top of their boots and reflects the British Army's obsession with anti mosquito measures, which this is clearly part of.

Another particularly interesting detail of this suit is found at the seat. Zips fitted to each side seam allow the seat to be unfastened as a flap, allowing the wearer to go to the toilet without having to remove the whole suit. Both the zips are the originals and are marked 'D.O.T Made in England'. The main zipper fitted in the front of the suit is also a DOT example and works well, although it is missing its puller. All the buttons are rubber examples.

Inside the suit the original label is still present and is bright and legible. It bears the title 'Tank Suit Jungle' and states the size as No. 4. The maker's name of M. Belmont & Co Ltd is also present as is the 1945 date and the War Department broad arrow marking.

The suit is in very good condition as can be seen in the pictures. It shows only limited signs of wear and age and overall it displays very well. Please study the pictures before purchasing and bear in mind that this is a vintage, pre-owned item which may have small issues commensurate with this.

A very good example of this rare pattern of tank suit which has loads of great details!