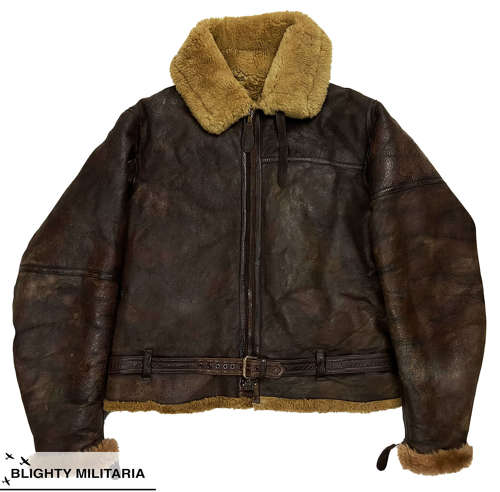 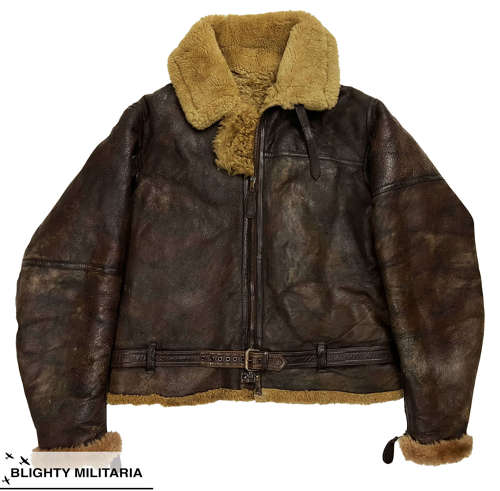 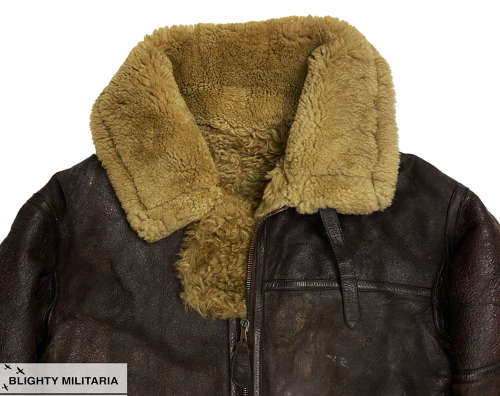 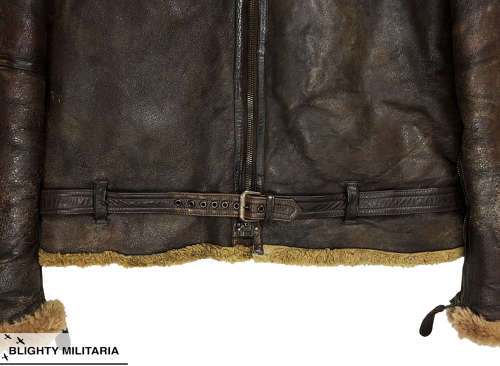 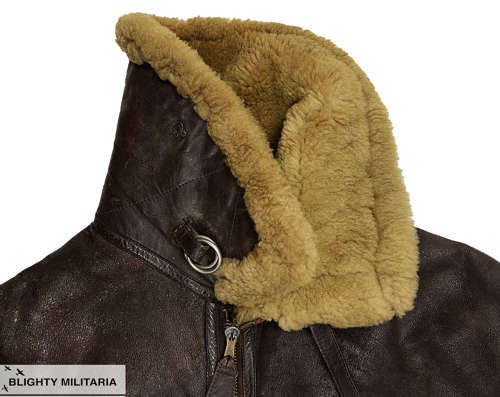 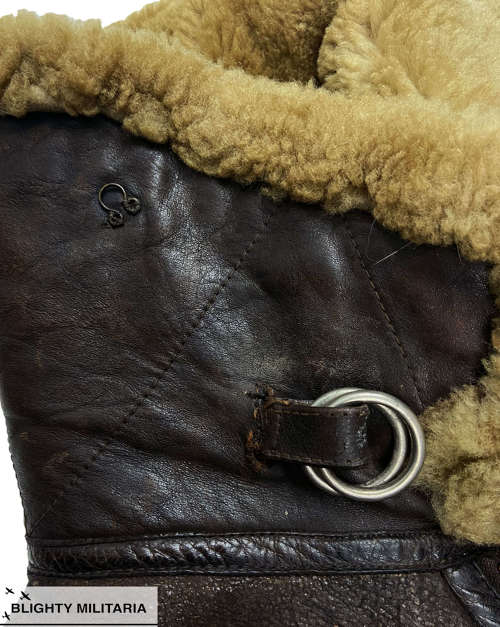 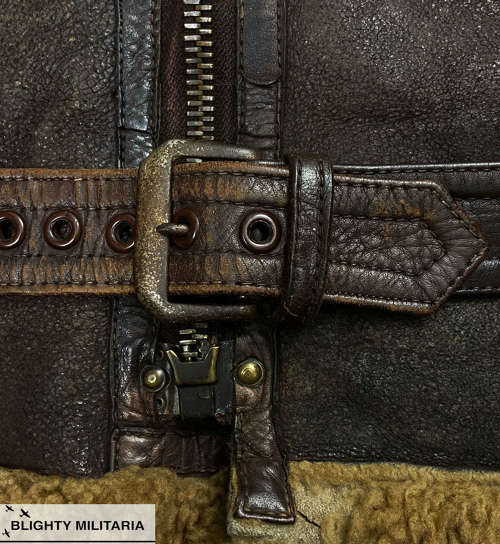 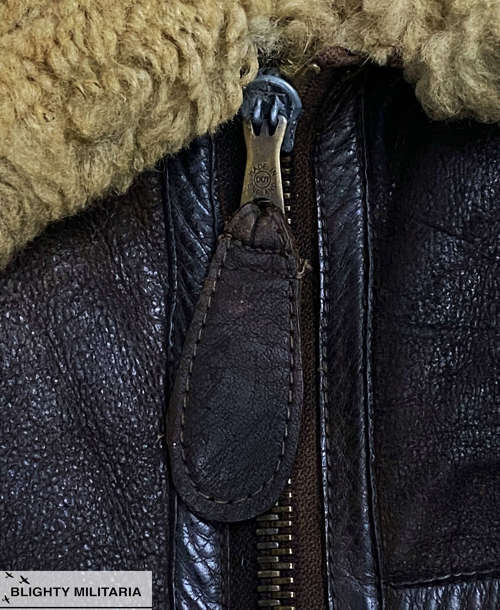 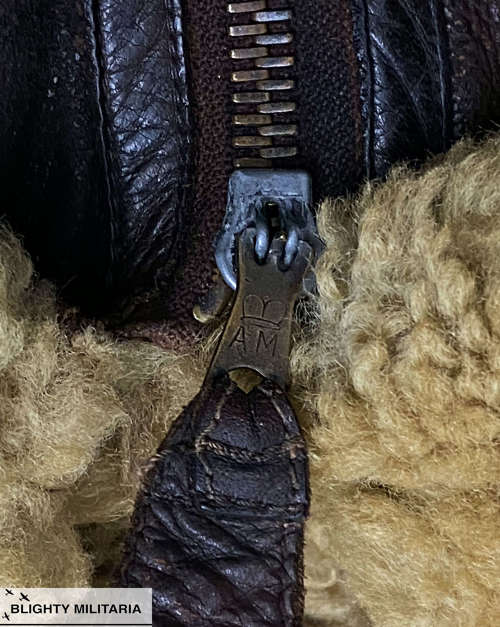 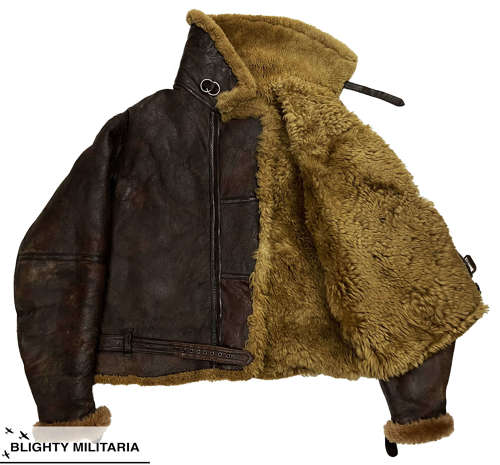 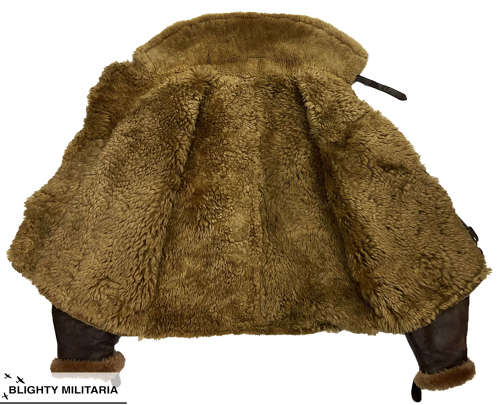 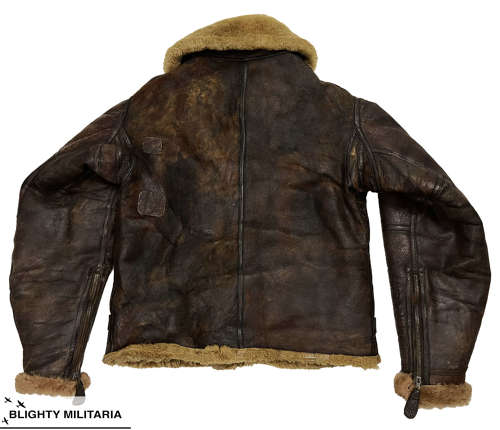 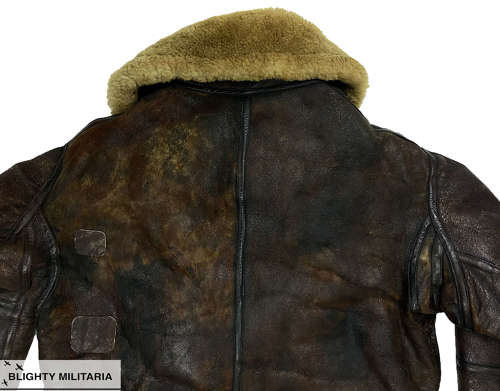 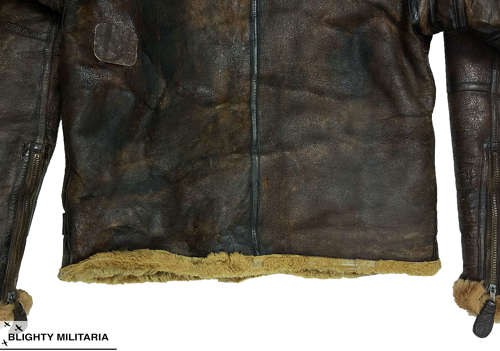 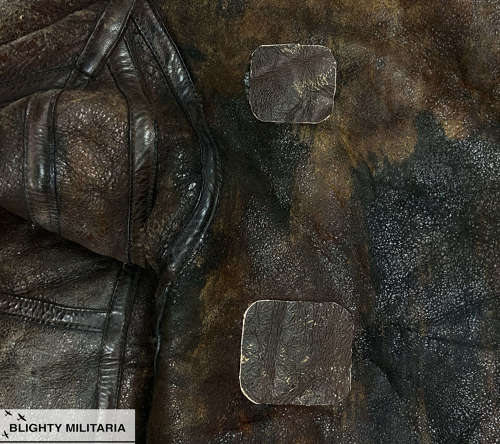 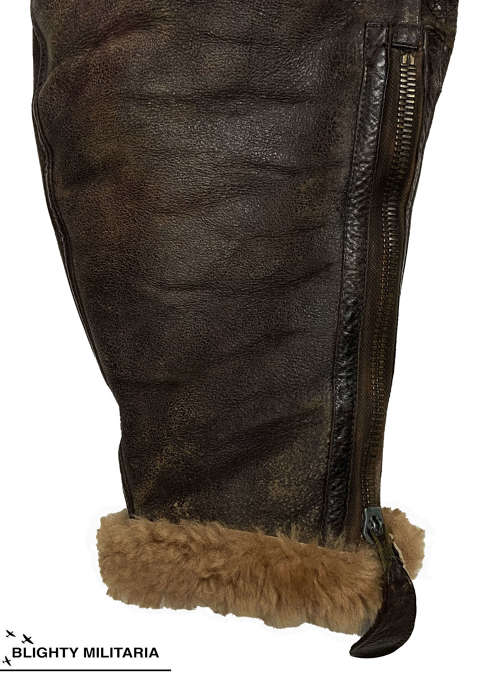 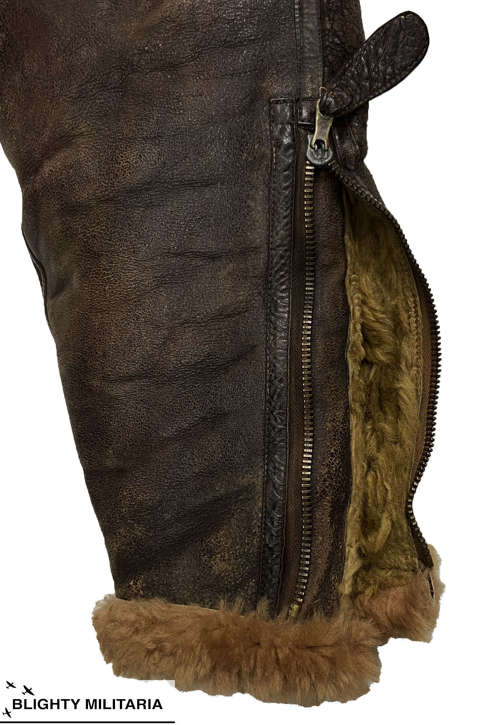 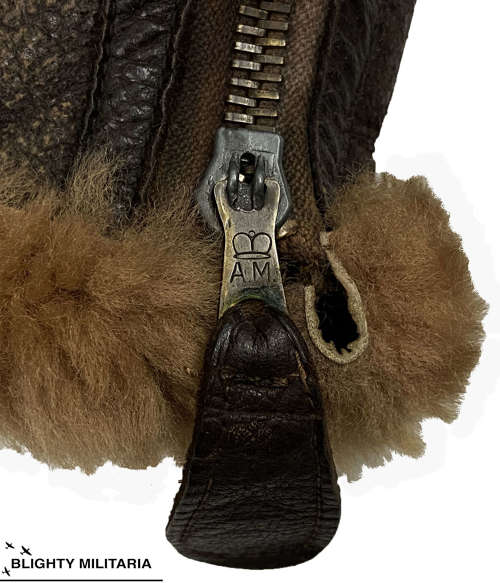 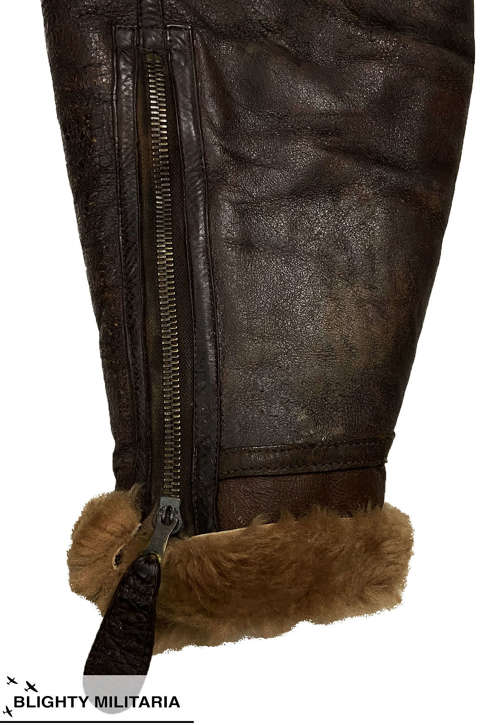 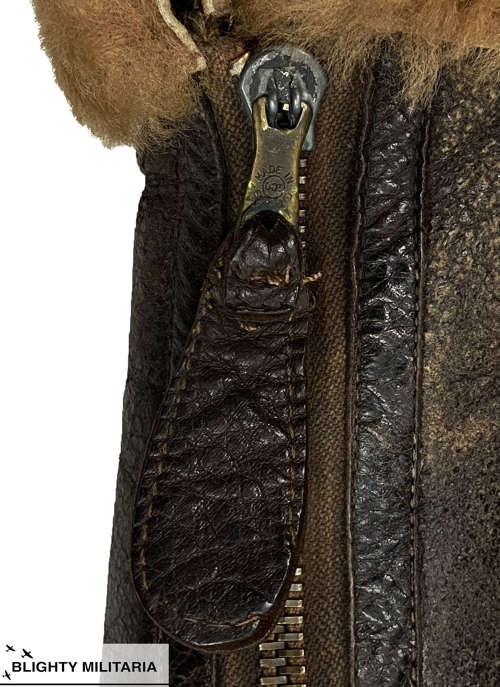 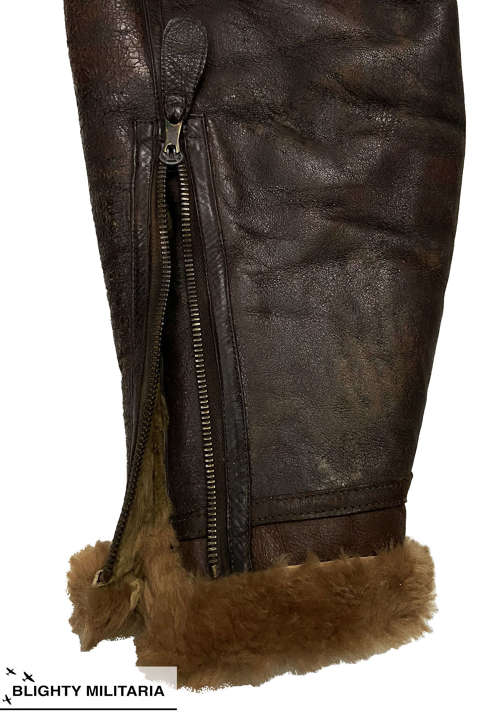 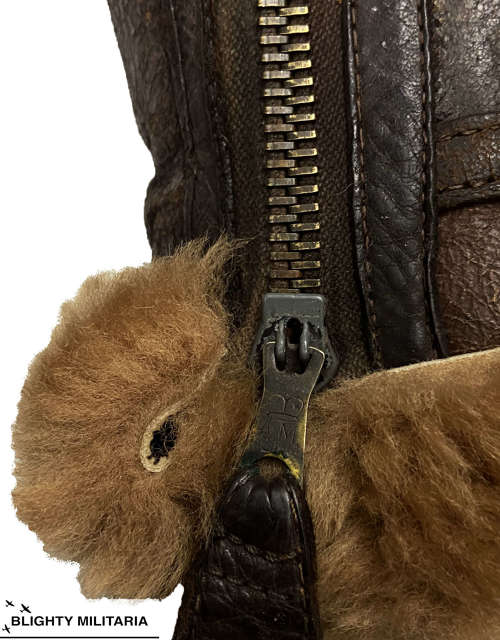 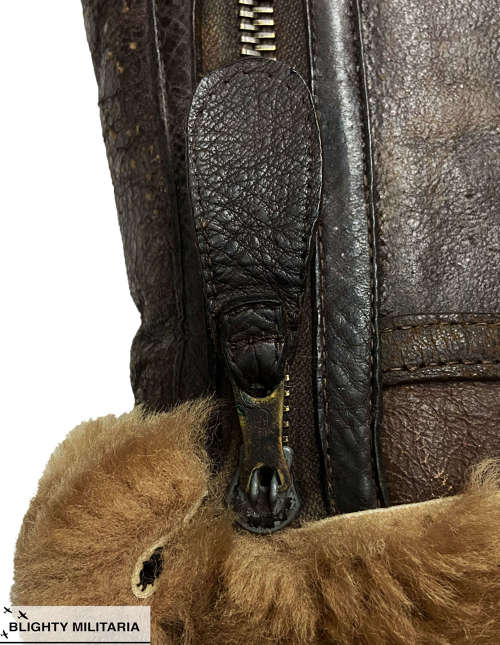 This pattern of jacket with the single rear seam was produced in the early part of WW2 and was replaced with jackets made from more panels (often referred to as 'multi-panel' jackets) in 1941. This jacket appears to be a crossover example so most likely dates from around 1941. The square collar shape and belt positioning would suggest that this jacket was made by 'Wareings' who were a prolific manufacturer of leather items during the war.

The main zipper is a brass 'D.O.T' branded example which features a large bucket to the bottom which is held in place with brass rivets. The sleeve zips are also made by D.O.T and feature the Air Ministry AM and crown marking the reverse. All the zips still retain their leather pull tabs which is rare to find on jackets today. The original waist belt is also present and comes complete with its nickel plated belt buckle which shows some signs of age but functions as it should. The collar features the two chrome plate metal 'dee' rings to the underside as well as the metal hooks to which the elastic collar strap can be fitted.

The overall condition of the jacket is very good, as can be seen in the pictures. The chrome finish to the exterior of the leather is good with only limited areas of crazing etc and the sheepskin lining is also good. There is some loss of finish to the leather on the arms as well as to the rear which is illustrated in the pictures. There are also some leather patches to the rear. All of the zips are original and function well. The jacket looks to be very strong and wearable but is of course a vintage, pre-worn item which may have small issues commensurate with age.

A nice original Irvin jacket in wearable condition and in a larger size.