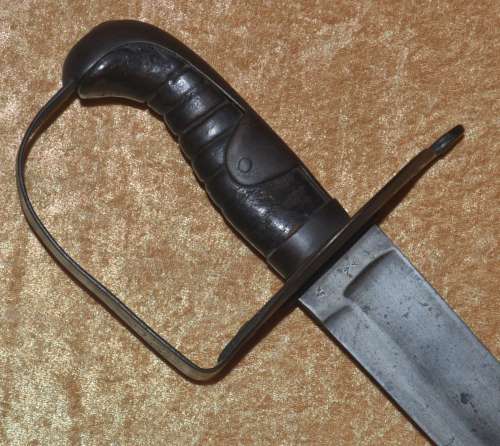 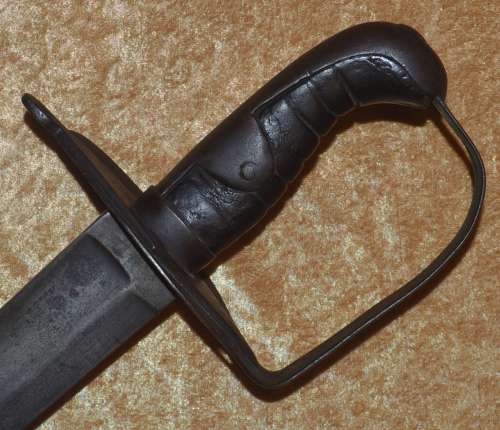 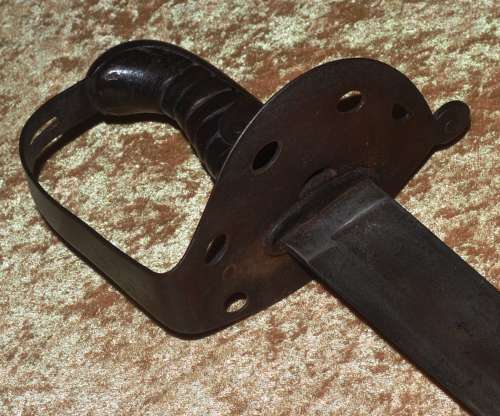 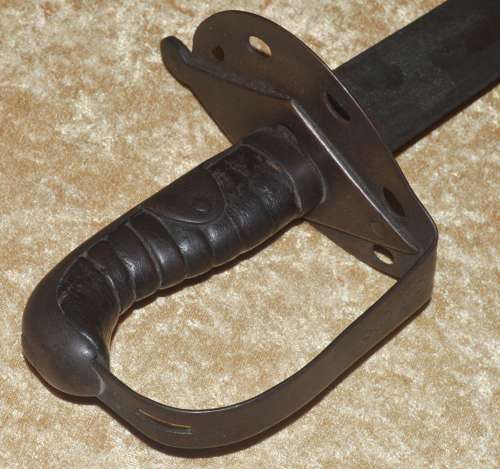 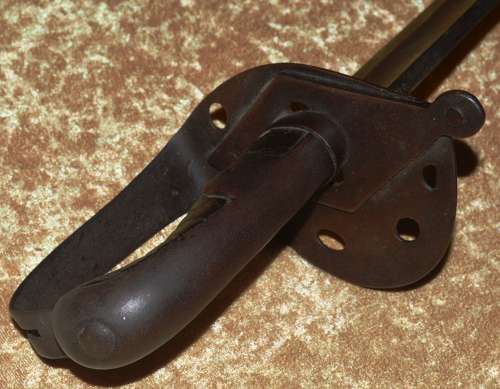 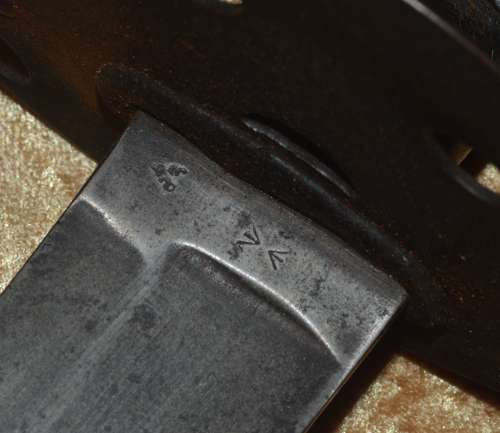 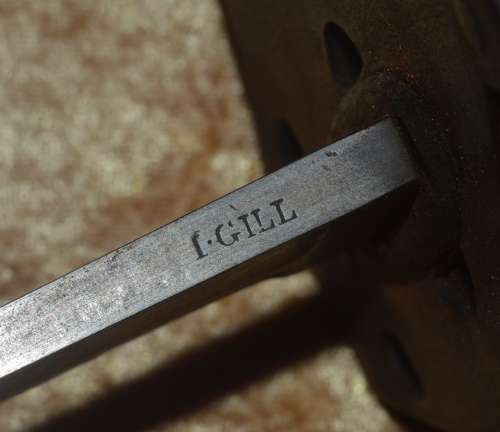 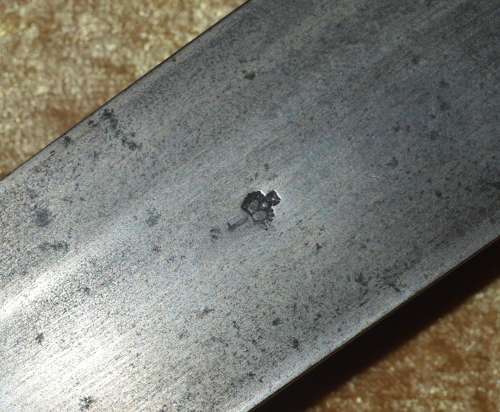 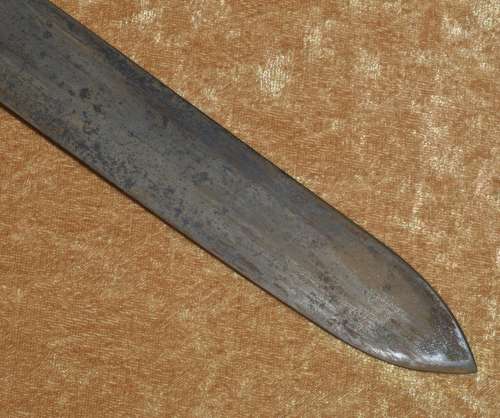 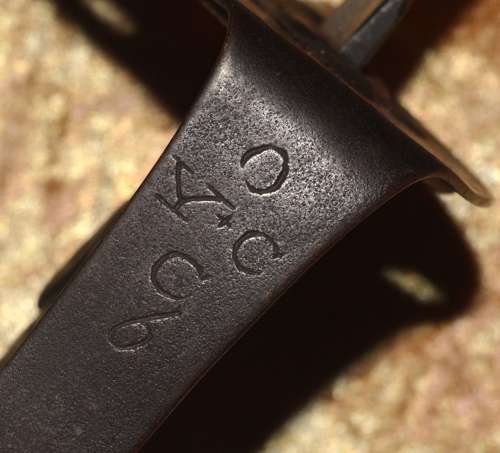 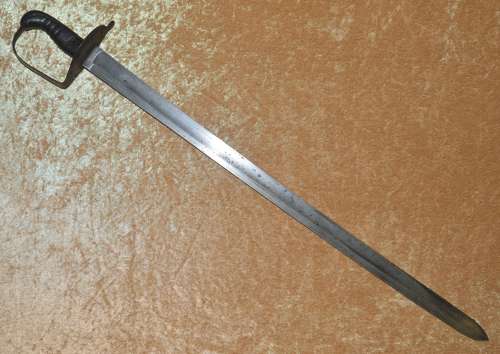 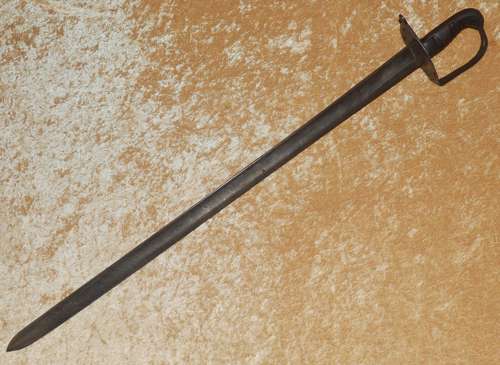 The iconic P1796 Heavy Cavalry Sword, made famous by Bernard Cornwell’s fictional
Napoleonic Wars hero Richard Sharpe in books and TV, was the sword carried by the Union
Brigade at the Battle of Waterloo.  As manufactured it was a heavy and clumsy sword not
generally liked by those who carried it, however, with certain simple modifications it was a
very effective weapon in strong skilled hands.  This example shows these modifications, an
indication of obvious field use.  The large disc guard would dig into the side of the wearer
and so it was often ground down on the inside as on this example.  The standard tip was a
hatchet point, which was fine for slashing, but inadequate for a thrust and so this example
has been ground to a spear point.  The standard scabbard was iron with twin carry rings, but
this example lacks the scabbard.  Unlike leather scabbards, the iron scabbard was not likely
to wear out, so its absence indicates the likelihood that this was a battlefield pickup.  There
would have been many swords of this type left on the field at Waterloo.  The attack of the
Union Brigade, numbering no more than 1000 riders from three regiments, was extremely
successful against the French infantry, inflicting an estimated 5,000 casualties and stopping
the assault that threatened to break the British infantry on Mont St. Jean.  In addition they
captured two French Eagles, that of the 105th and the 45th line regiments.  However, due to
over-excitement and poor discipline, many of the cavalrymen ignored the recall and
continued past the French infantry to attack the Grand Battery.  Not having any nails to spike
the cannon they achieved little, but with their tired horses they became easy prey for a
counter attack by French chasseurs, cuirassiers, and lancers.  They suffered nearly 50%
casualties, including brigade commander Sir William Ponsonby.  The sword offered here
features the standard iron disc guard with the aforementioned modification, dove-head
pommel with integral back strap and langets riveted through the leather-covered wood grip.
Knuckle bow stamped “O/Y+C/C/6" (Oxfordshire Yeomanry Cavalry 6th Company?) Broad
straight single-edged 32 ½" blade (shortened from the regulation 35") with wide full-length
fuller and ground spear point; stamped “T. GILL” (Thomas Gill, Birmingham and London).
Ricasso stamped with broad arrow ordnance mark and a crowned “I” in the fuller.  Hilt with
deep brown patina; blade generally smooth with light age staining and some rust near the
point. Overall length 37 ½".