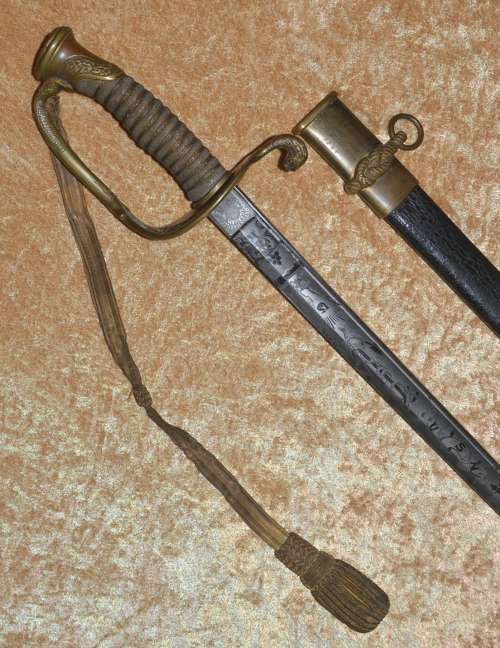 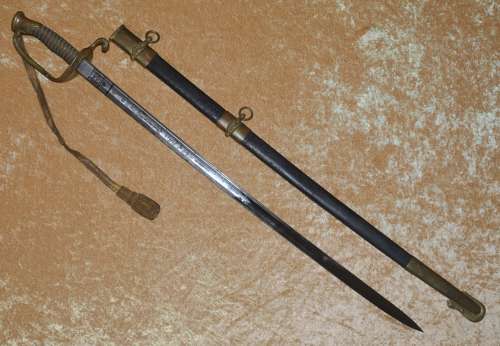 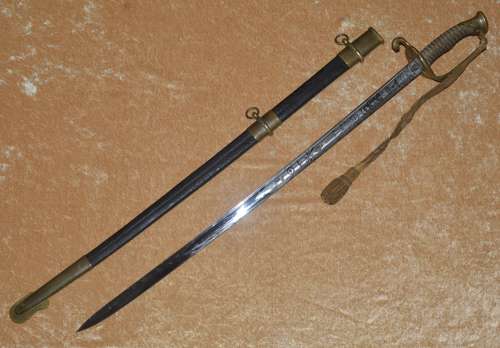 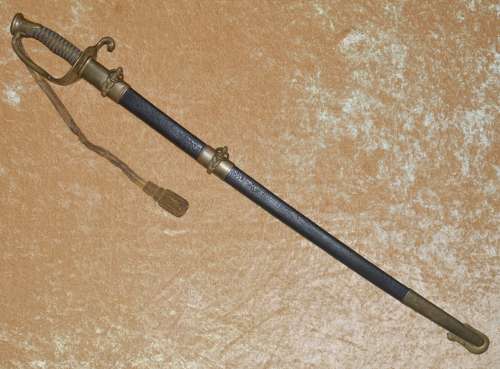 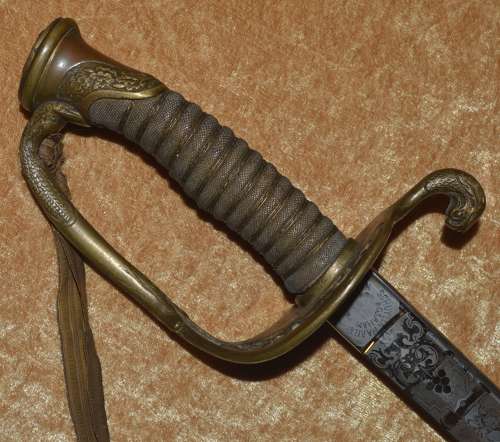 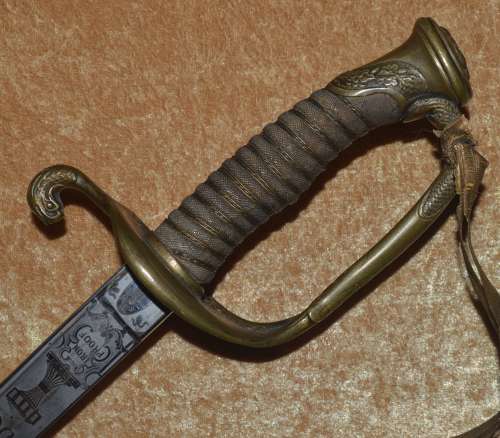 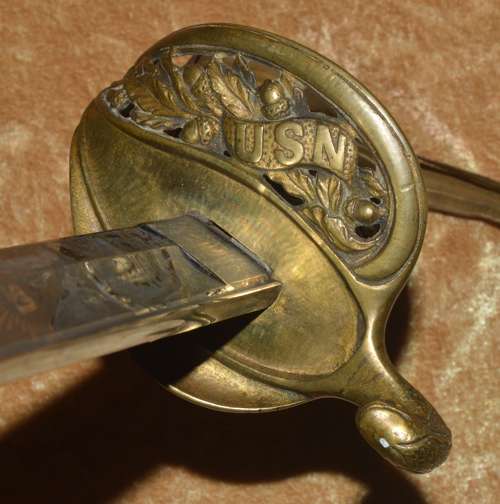 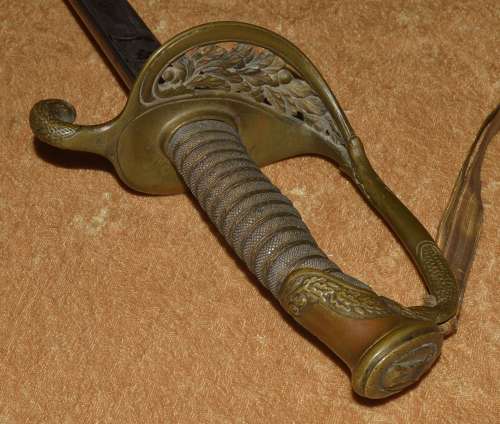 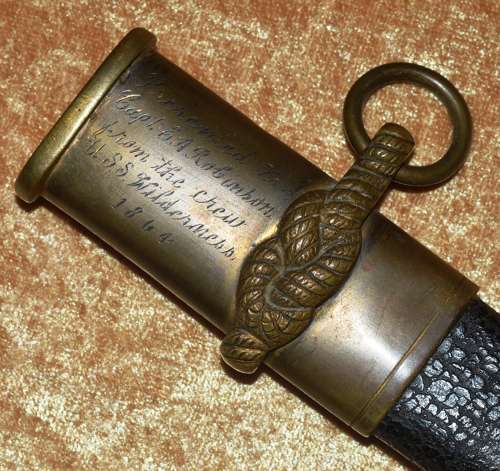 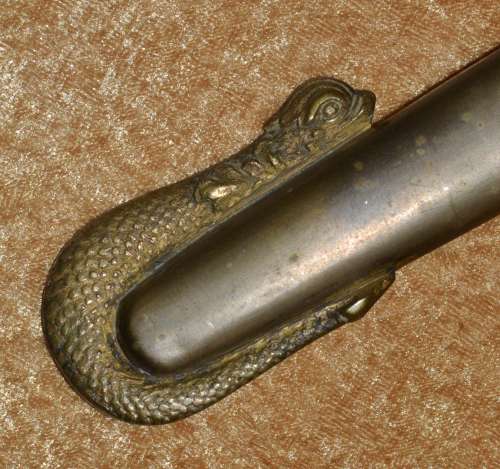 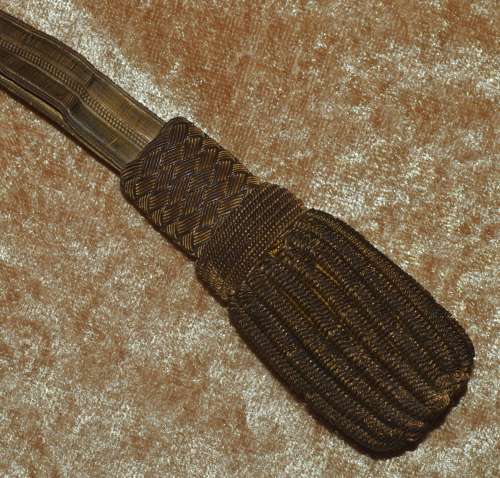 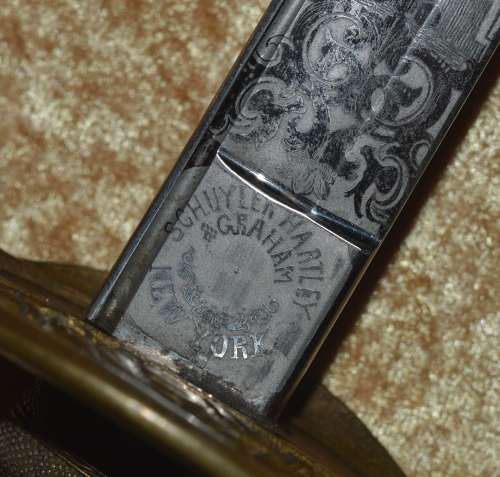 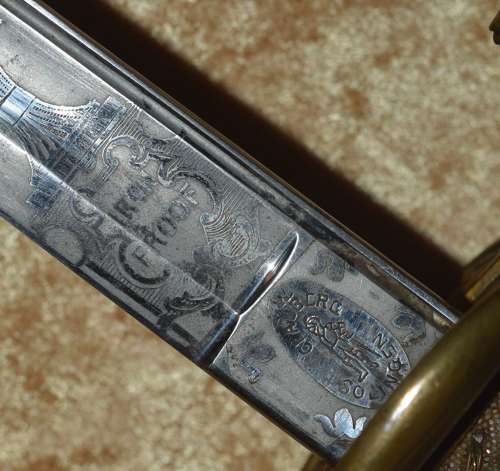 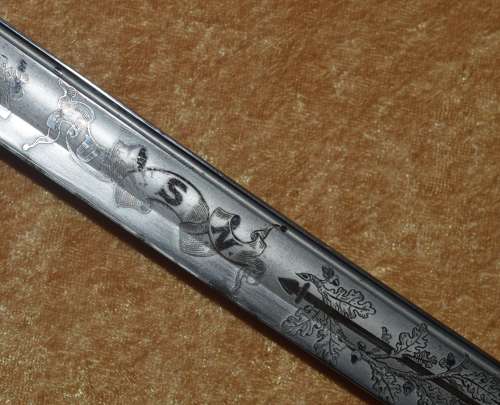 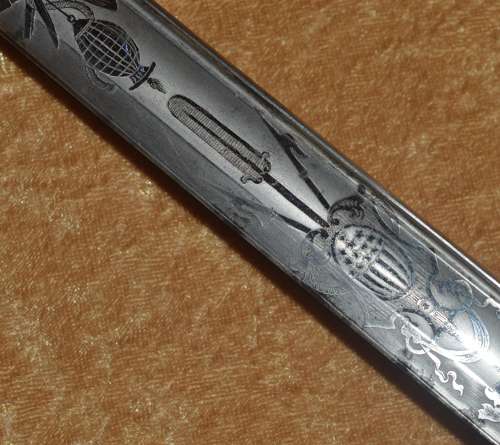 Fine quality and condition US M1852 Naval Officer’s Sword made by Clauberg of Solingen
and retailed by the famous New York firm of Schuyler, Hartley, & Graham; inscribed on the
scabbard throat fitting “Presented to/Capt. E.A. Robinson/from the crew/U.S.S.
Wilderness/1864".  Standard pattern with gilt brass hilt featuring pierced foliate decoration
and ribbon bearing “USN” on the guard; sharkskin grip with brass wire wrap.  Slightly
curved 29 ½" single-edged blade with broad and narrow fullers, finely etched over its upper
half with foliage, anchor, trident, and “USN” in ribbon on one side and “IRON PROOF”,
capstan, stands of arms, and US flag on the other side.  Ricasso marked
“Clauberg/Solingen in an oval around a standing knight on one side and “SCHUYLER
HARTLEY/& GRAHAM/NEW YORK” on the other side.  Etching very clear and retains its
original frosted finish.  Black leather scabbard with brass mounts and double carry rings.
Leather flaking but complete and mounts loose due to leather shrinkage.  Retains a period
gold bullion sword know, likely with it from the beginning (some wear and fading).

USS Wilderness
Originally built as the “B. N. Creary” in 1864 at Brooklyn, New York she was acquired by
the Union Navy on 30 May, 1864 and simultaneously renamed “Wilderness”.   She fitted
out at the New York Navy Yard and was commissioned on 20, July 1864, being
immediately assigned to the 2nd Division of the North Atlantic Blockading Squadron.  After
serving briefly at Hampton Roads and the James River she was sent to the North Carolina
coast where she was fitted with four 24-pounders in October, 1864.  She went into action
almost immediately and on the night of 31 October while patrolling off New Inlet, North
Carolina, pursued and captured the British blockade runner “Annie”.  In December she
participated in the attacks on Ft. Fisher where she assisted in the failed attempt to breach
the fort by towing the sidewheel steamer “Louisiana” filled with explosives near the fort’s
walls.  The ship exploded as planned but had little effect.  On January 13, 1865
“Wilderness” brought troops to within 500 yards of the shore where they were loaded on
boats for the final assault on Ft. Fisher.  She was decommissioned on 10 June 1865 and
transferred to the Treasury Department and served as a revenue cutter in the Gulf of
Mexico.  In 1873 she was renamed “John A. Dix” and was eventually sold in 1891.