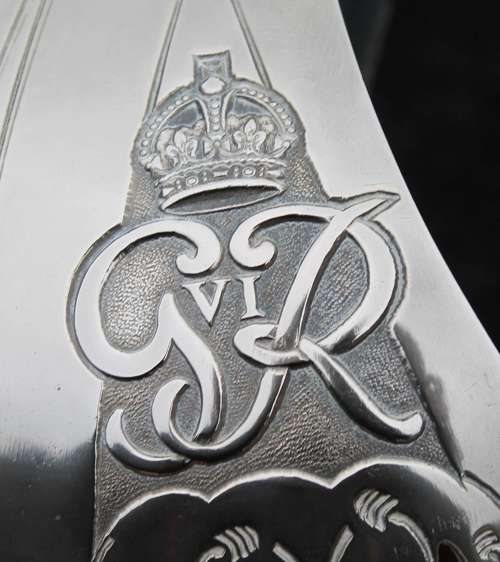 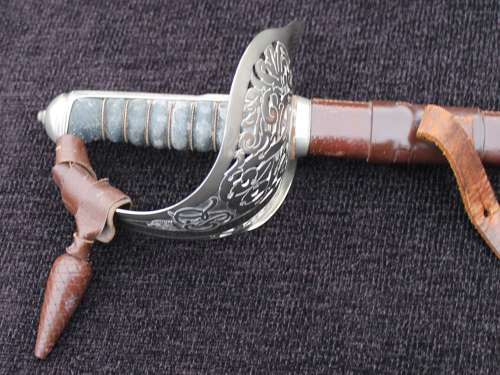 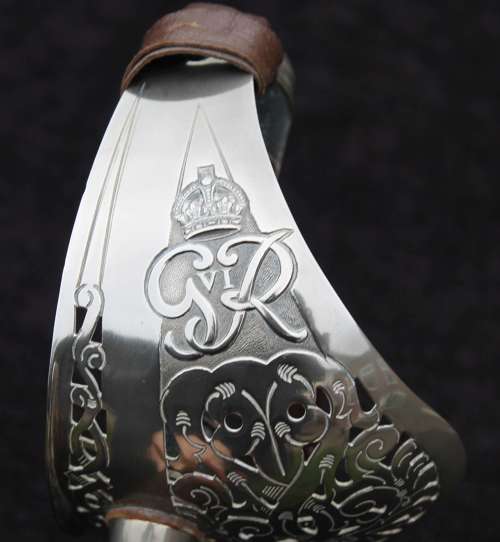 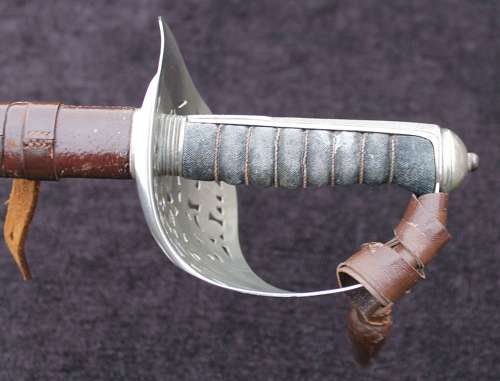 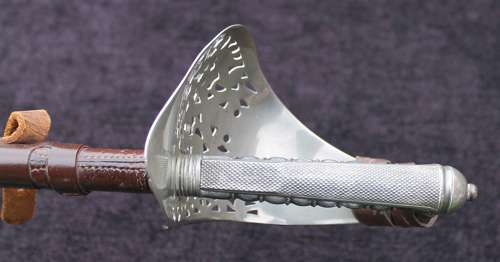 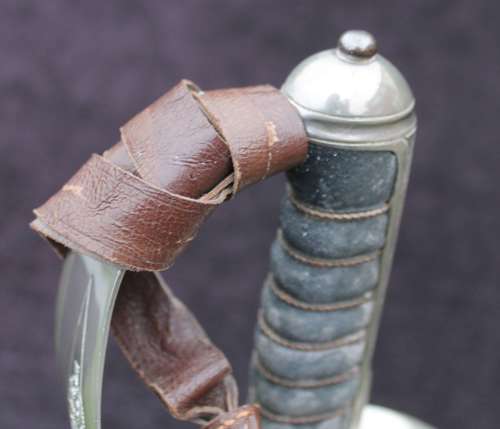 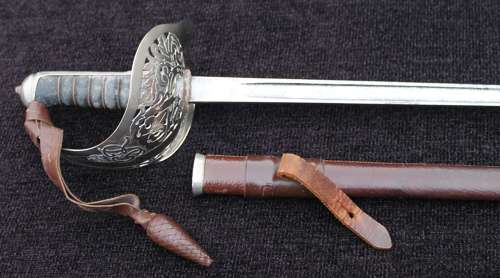 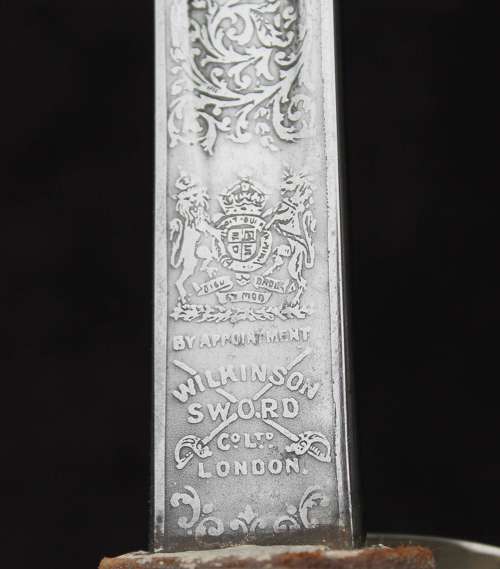 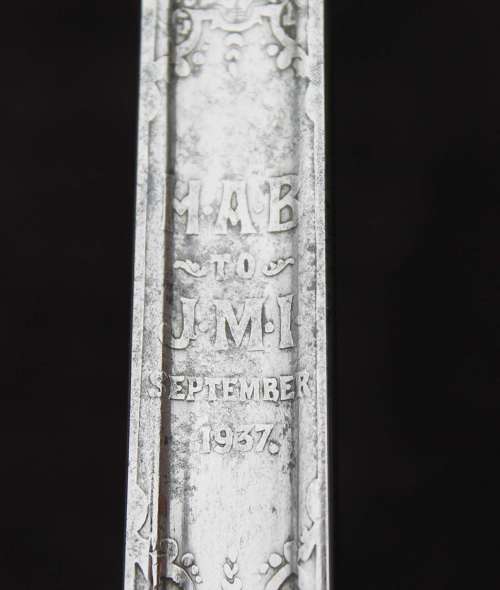 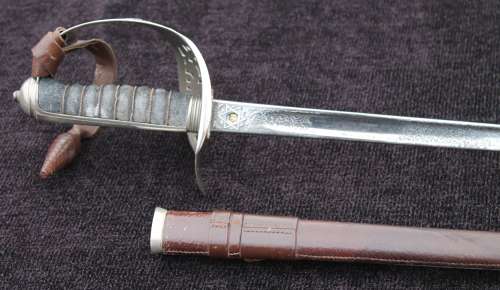 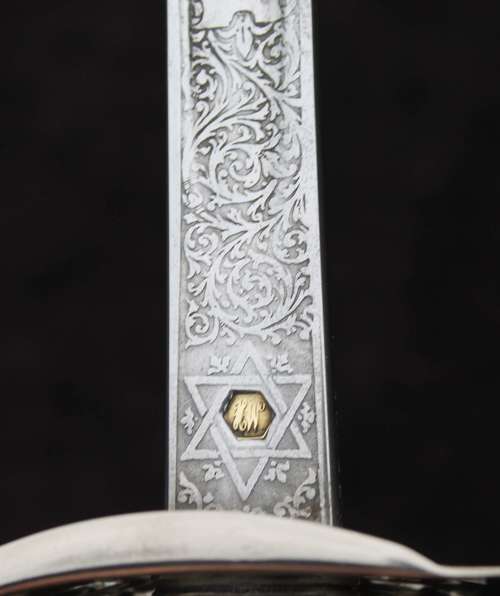 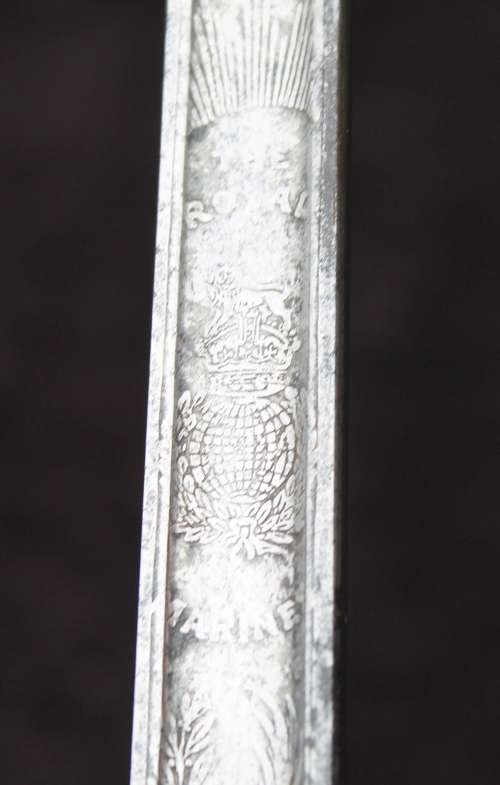 This example produced by Wilkinson Sword, London in 1937. It will have been amongst the first George VI 1897 pattern infantry officers swords produced.

The proof ledger records a date of 27th August 1937, describing it as a "Royal Marines" pattern. The name of the purchaser is a little indistinct, but a glance at the army list confirms it as "J.M. Icke, Royal Marines." This is interesting, as the blade has an etched presentation "H.A.B. TO J.M.I. SEPTEMBER 1937".

John Michael Icke is recorded as a "Probationary" Second Lieutenant from the 1st of September 1937. It would seem this sword was a gift to 2nd Lieutenant Icke on his commissioning. In this case, it is odd that Icke's name rather than the currently mysterious "H.A.B." appears on the Wilkinson proof ledger. It will be a job for the new owner to further research whom these initials refer to.

I can find a reference to a Captain J.M. Icke serving aboard HMS Birmingham as the officers commanding the Royal Marines (Dated 17 August 1943) Further research into his wartime, and post war service will be left to the new owner.

1897 pattern infantry officers guard with the George VI crowned cypher. The plating to the guard in clean condition, with minor blemishes. Domed pommel and chequered backpiece. Shagreen grip with copper twistwire binding. Wear to the grip, but no losses.

The 32.5 inch blade marked at the ricasso "By Appointment Wilkinson Sword, Ltd, London" and with their hexagonal "best proof" disc to the other. The blade is well etched, featuring the aforementioned presentation inscription, foliate decoration, and crowned GVI cypher and royal coat of arms. To the other side the Royal Marines crowned globe badge, surmounted by the words "The Royal Marines" Minor staining to the blade, and wear to the etching, but generally good condition overall.

The blades spine with serial number, and etched "Made in England".

Sold with a digital copy of the proof book register for this sword.