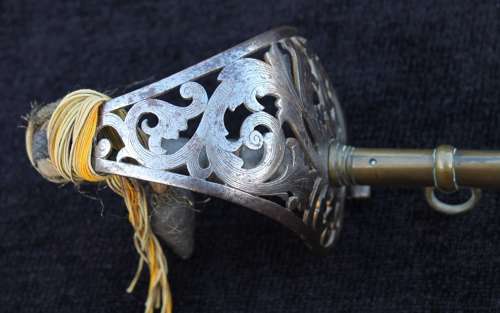 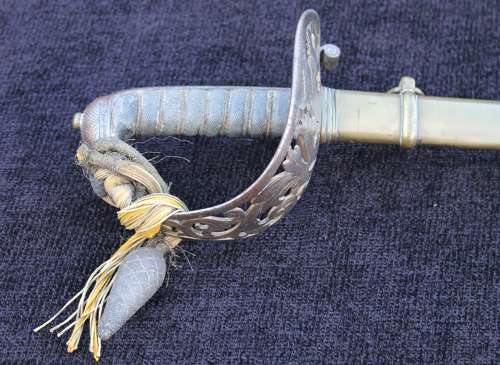 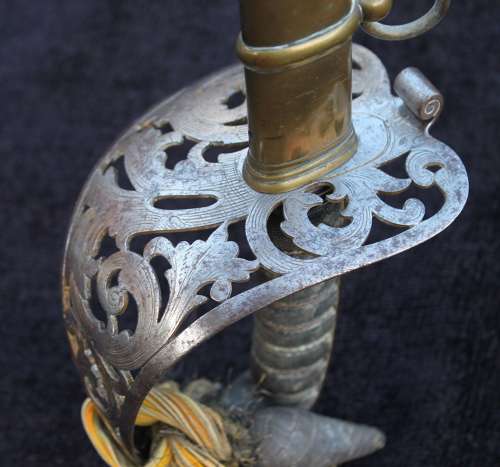 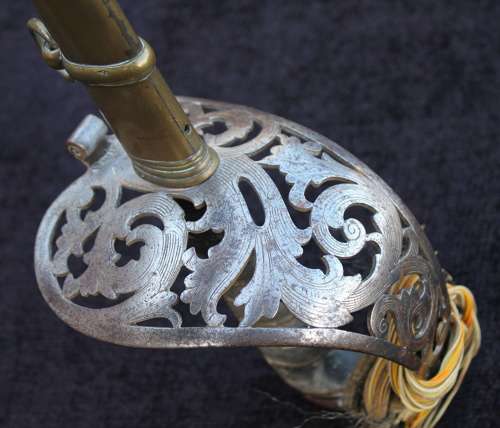 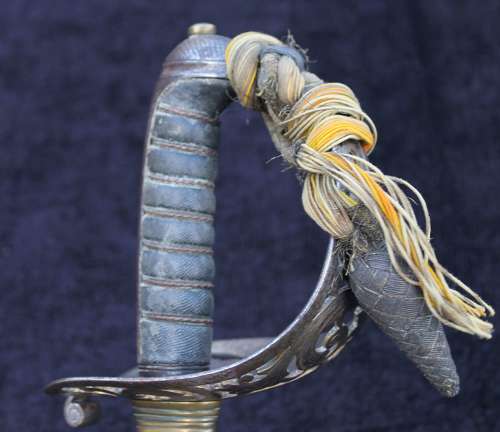 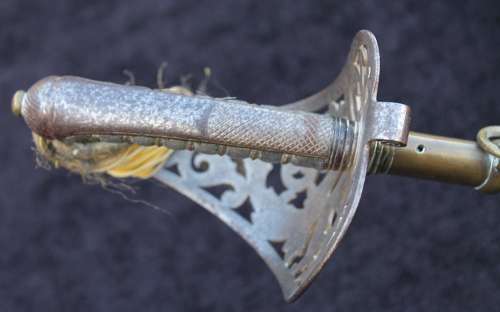 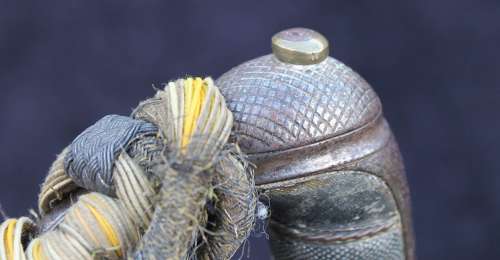 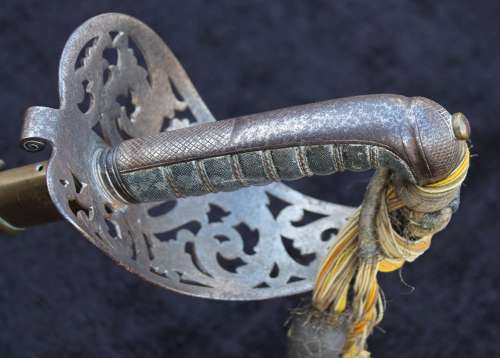 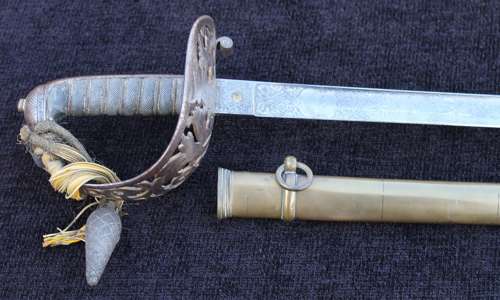 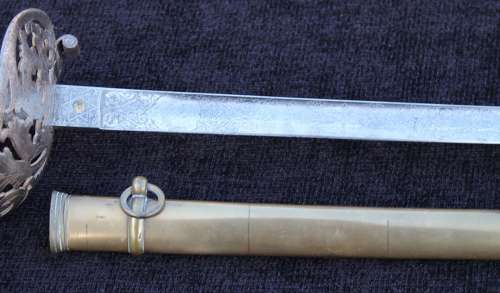 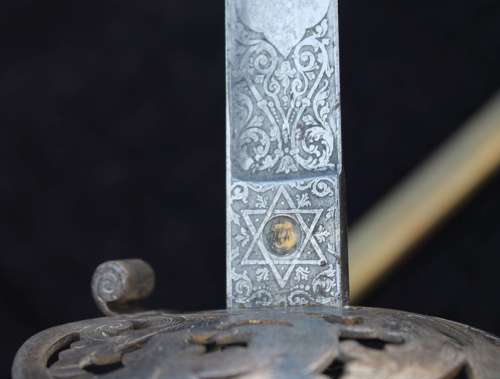 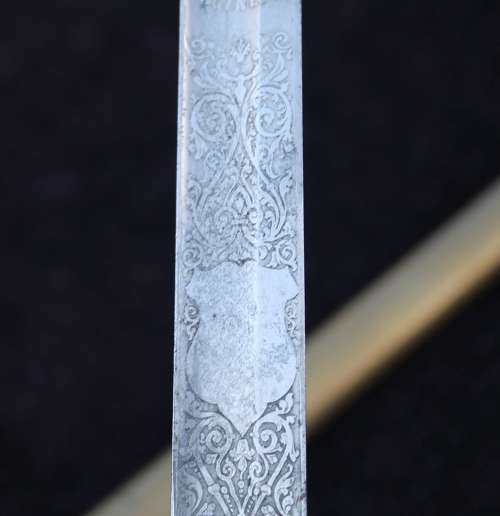 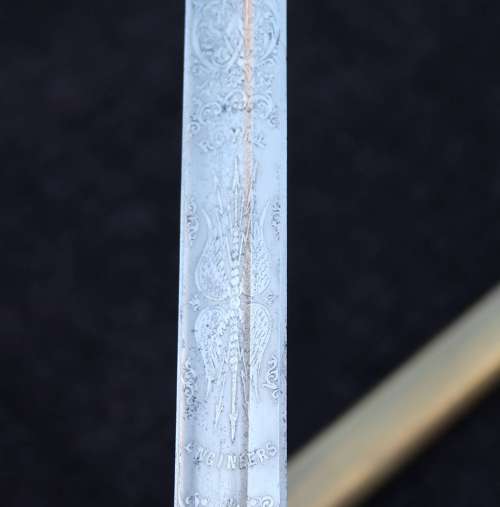 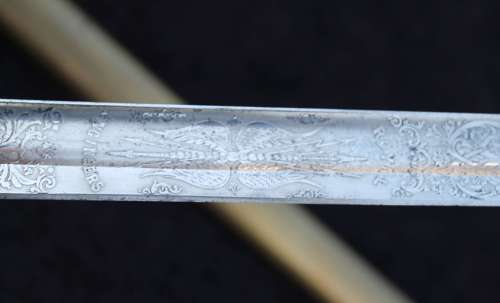 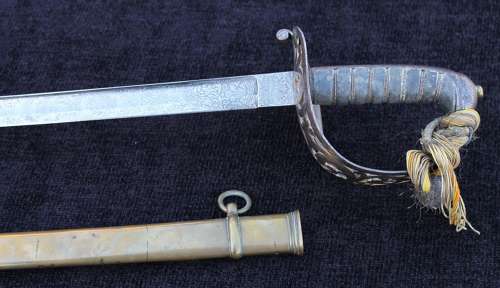 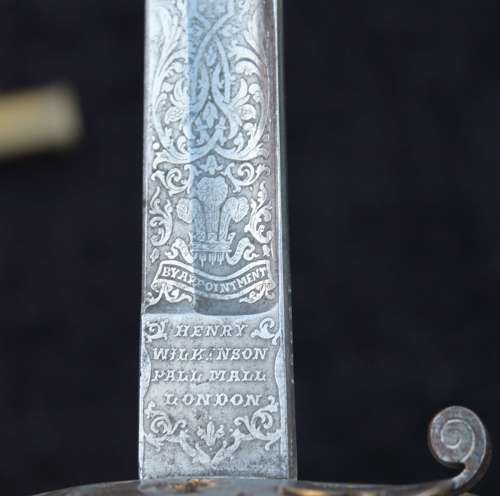 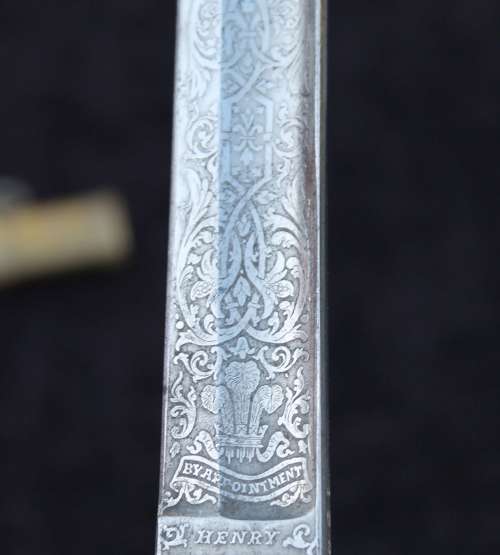 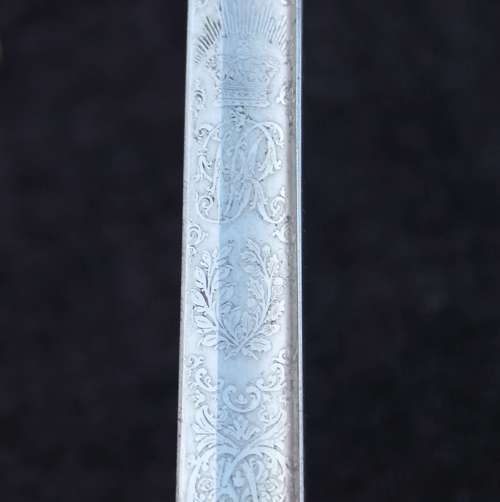 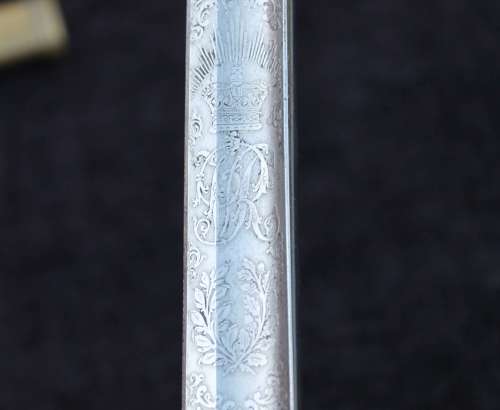 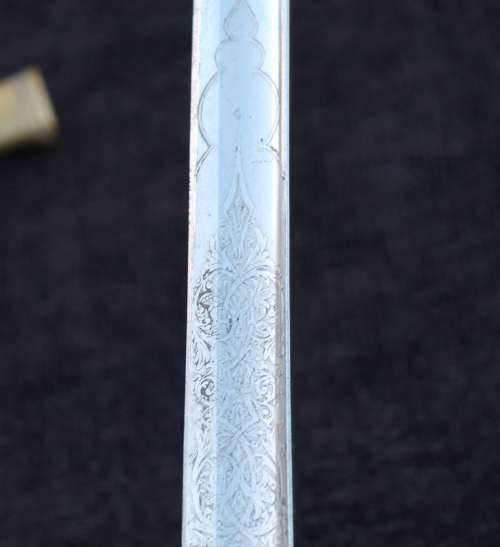 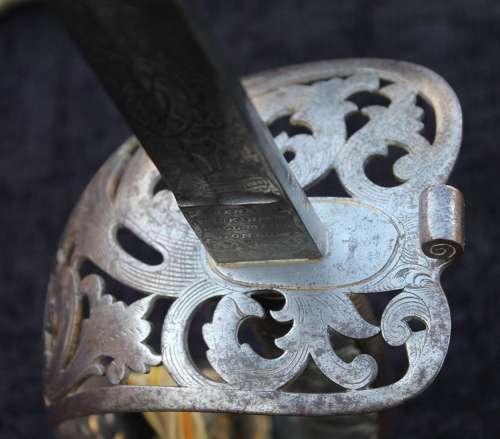 The Wilkinson Ledger page for this sword, 18551 describes the sword as a Steel Gilt Royal Engineers Sword. The steel hilt rather than the standard brass pattern would have been an optional extra from Wilkinson, and once gilded, it would have been indistinguishable from the preseribed pattern. However, it would have offered the user much better protection. It would seem that Captain Hills either lost or damaged his original sword, and perhaps previous experience in India taught him that a sword of better quality was required.

​His brother Lieutenant General Sir James Hills-Johnes was awarded a Victoria Cross during the Indian Mutiny.

The following taken from "The Dictionary of National Biography".

HILLS, Sir JOHN (1834–1902), Major General, Royal (Bombay) Engineers, born at Neechindipore, Bengal, on 19 August 1834, was the third son in a family of six sons and four daughters of James Halls of Neechindipore, one of the largest land-owner and indigo planters in Bengal. His mother was Charlotte Mary, daughter of John Angelo Savi of Elba, and grand-daughter of General Corderan, commanding the French forces at Pondicherry. The second son is Lieutenant-general Sir James Hills-Johnes.

Educated at the Edinburgh Academy and at the Edinburgh University, where he won the Straton gold medal, Hills entered the East India Company's College at Addiscombe on 6 Aug. 1852, and was made second lieutenant in the Bombay engineers on 8 June 1854. After instruction at Chatham, Hills arrived at Bombay in August 1856, was posted to the Bombay sappers and miners, and having passed in Hindustani was appointed, on 14 Jan. 1857, assistant field engineer with the 2nd division of the Persian expeditionary force under Major General Sir James Outram [q. v.]. He was present at the capture of Mohumra, and for his services with the expedition received the medal with clasp. He was promoted lieutenant on 5 Nov. 1857. While at home on furlough he was elected a fellow of the Royal Society of Edinburgh, on 21 March 1859.

Returning to India, Hills was for a time garrison engineer at Fort William, Calcutta, and in January 1862 became assistant to the chief engineer in Oude in the public works department at Lucknow. Promoted captain on 1 Sept. 1863, he was appointed executive engineer in Rajputana in 1865. In 1867 he joined the Abyssinian expedition under Major General Sir Robert Napier (afterwards Lord Napier of Magdala) [q. v.]. He was at first employed as field engineer at Kumeyli camp, at the foot ​of the hills, to which the railway was made from the base at Zula, ten miles away, on the Red Sea. There he was mainly occupied in sinking wells for water supply. Later he helped to construct the road from rail head at Kumoyli to Senafch, a distance of over 50 miles, with elevations rising to over 7000 feet, a most difficult undertaking. He was mentioned in despatches and received the medal.

After the campaign Hills resumed work at Lucknow. From 1871 to 1883 he was commandant of the Bombay sappers and miners at Kirkee, bringing this native corps into a high state of efficiency. Meanwhile he was promoted major on 5 July 1872, Lieutenant Colonel on 1 Oct. 1877, and brevet Colonel on 1 Oct. 1881.

During the Afghan war of 1879-80, and while still commandant of the Bombay sappers and miners, Hills was commanding Royal Engineer of a division of the Kandahar field force as well as of the South Afghanistan field force in 1881. He took part in the defence of Kandahar and distinguished himself on several occasions; was mentioned in despatches for his services, was created C.B. on 22 Feb. 1881, and received the medal.

After a furlough Hills served as commanding Royal Engineer of the expeditionary force to Burma in 1886-7. He retired on 31 Dec. 1887 with the honorary rank of Major General. He was created K.C.B. in May 1900. He died unmarried at 60 Weymouth Street, London, on 18 June 1902, and was buried in the family vault at Kensal Green.

Hills was an all-round sportsman, a first-rate cricketer, a powerful swimmer, a fine swordsman, and an excellent shot; many tigers fell to his gun. He published 'The Bombay Field Force, 1880' (with plans, 1900), and 'Points of a Racehorse' (1903, 4to), which embodied the results of thirty years' close study.

The service sharpened 32.5 inch blade is bright, and superbly engraved, including the crowned VR cypher to one side, and regimental feathered lighting bolts and "Royal Engineers" motto to the other.

Complete in its brass scabbard for officers of field rank. This shows various, dents, dings, and bends, as well as an absent drag.

The swords blade has a slight bend, likely due to storage in the scabbard. This could be corrected, if desired, but is all part of this swords long service, and to my mind does not detract.

A very scarce example of a steel hilted Royal Engineers Sword to a distinguished Royal Engineer, which was by his side in the Abyssinian Expedition, during the Afghan War, and throughout the Burmese Expedition.