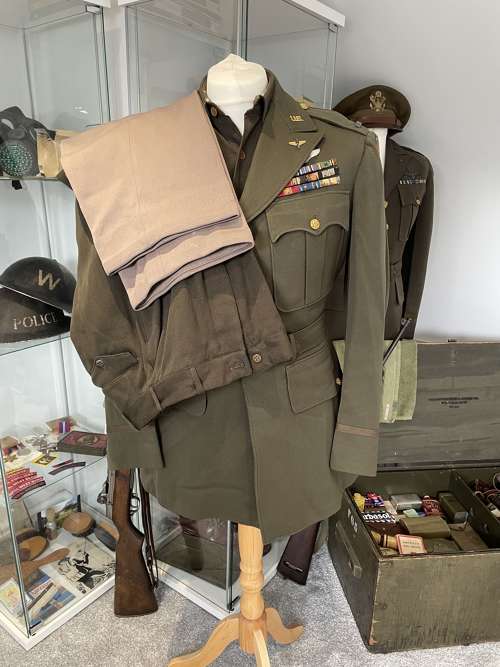 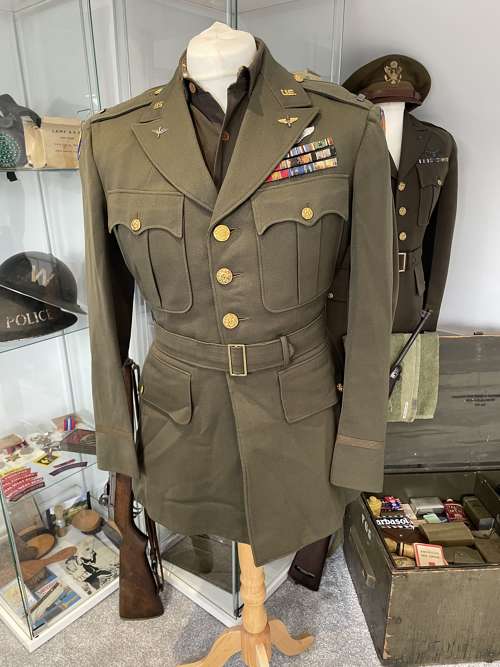 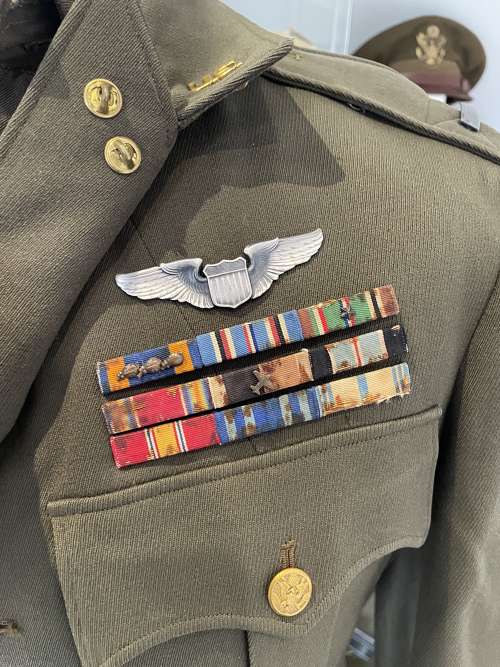 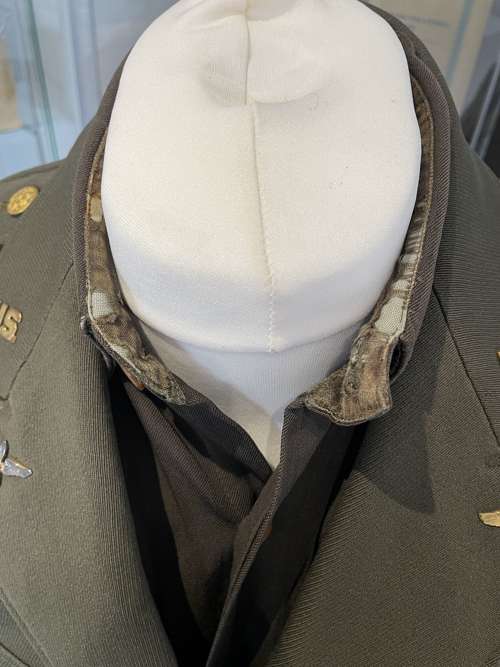 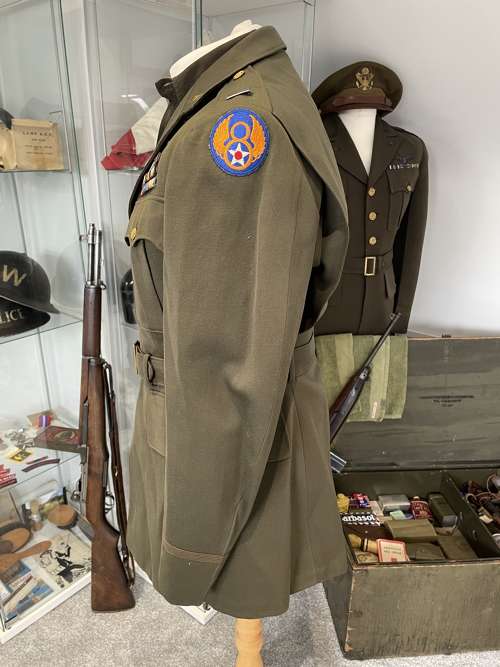 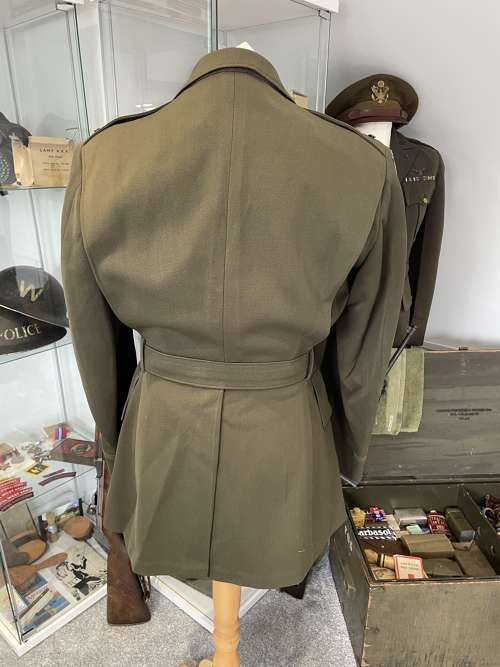 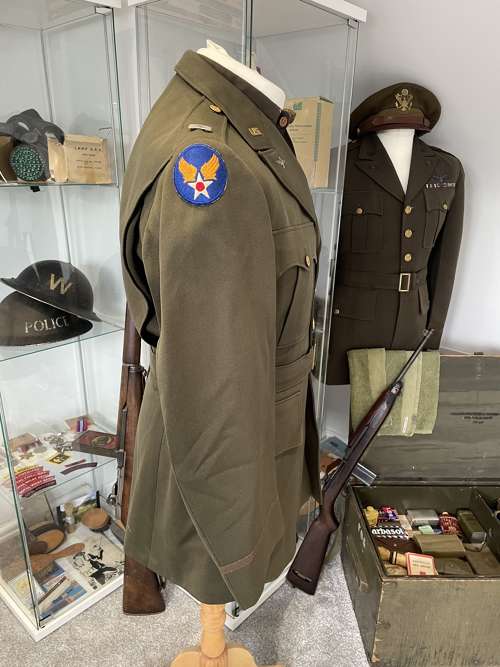 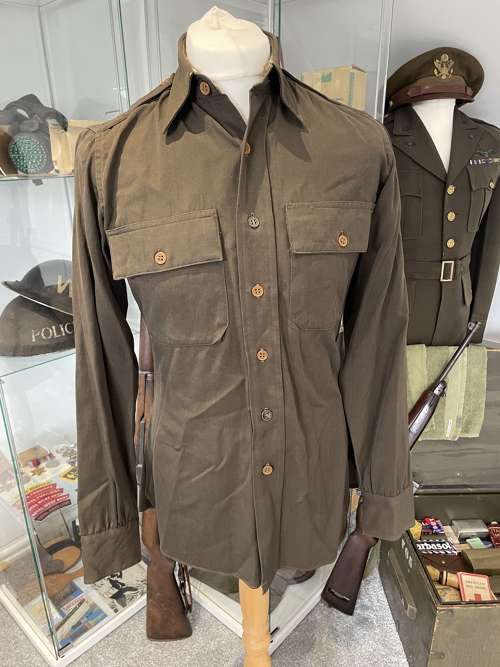 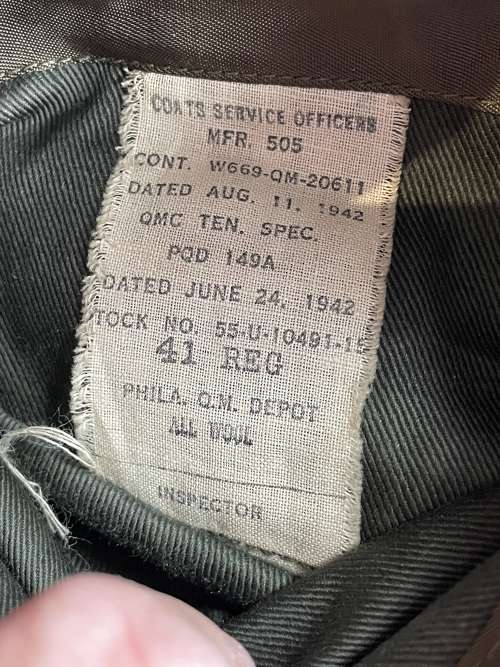 An original US WW2 era Officer's uniform grouping.  Comprises Class A dress tunic, chocolate shirt, one pair of 'pink' trousers and one pair of 'chocolate' trousers.  Both pairs of trousers are named to a John Nordstrom, with laundry number N-5291.  This laundry number is also present on a period laundry label pinned inside the back of the tunic.  The shirt is not named, but this was obtained as a complete grouping, directly from the United States.

A search of various 8th Air Force rosters, reveals a Lt. John. W. Nordstrom, who served with the 487th Bomb Group, stationed at Lavenham.  His rank and pilot's wings on the uniform correspond with this.  Furthermore, his Air Medal award card confirms he served with the 3rd Air Division (of which the 487th BG were part) and this also confirms his full service number as O-715291. His Air Medal award card shows the first being awarded on 9 November 1944. Two photographs are attached, in the crew shot, he is back row, third from left.

The online document "Men Who Made The Berlin Airlift Work" dated 1949 lists a John W. Nordstrom as having been serving with the HQ 313 Troop Carrier Group, at the time flying the Fairchild C-82 Packet and then the Douglas C-54 Skymaster.

Tunic is a relatively light green colour, very attractive and is in excellent condition. No moth nips noticeable or rips/tears.  The label shows this tunic being part of Contract No. W669-QM-20611, and dated August 11 1942.  Furnished with;

1. An 8th Air Force patch on the left shoulder,

5. A pair of First Lieutenant bars, non-matching, but both Sterling marked,

Size marked 41 Reg, but measured by hand as follows;

The chocolate shirt is in similar good condition, slight mothing visible when held up to the light, but not holed, no rips or tears, but there is some wear and tear around the collar, as these are very prone to.  Two buttons have been replaced with a darker colour, but apparently still period button.  Tailored by Elbeco. Size label is washed out, but measured by hand as follows;

General good order, all buttons present, one or two moth nips and slight fraying along the edge of one pocket. The seam below this is beginning to separate by around one inch, but easy repair. Inside pocket flap inked with; 5291-N, John Nordstrom twice, and a number of other laundry numbers suggesting these belonged to someone else before John, which would not be uncommon, or that he was assigned new service numbers after the war.

Inside Leg - 28.5 inches, potential perhaps for another 0.5 inches, but will be tight.

As above, all buttons present and no significant mothing. There is unfortunately a L-shaped tear on the seat, around 1.5 inches by 1.5 inches, will likely require an internal patch repair, but still easily achievable. 5291-N present twice on inside pocket flap, as is John Nordstrom. Again there are a couple of different laundry numbers present.

Inside Leg - 28 inches, potential perhaps for another 1.5 inches.

The photograph's of John in the listing are courtesy of 487thbg.org.