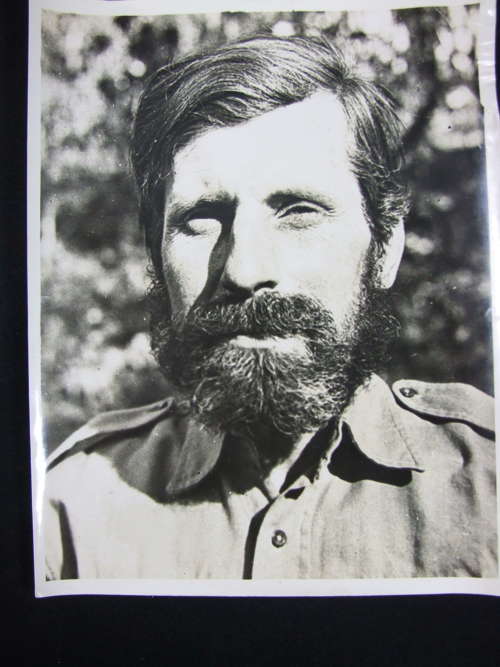 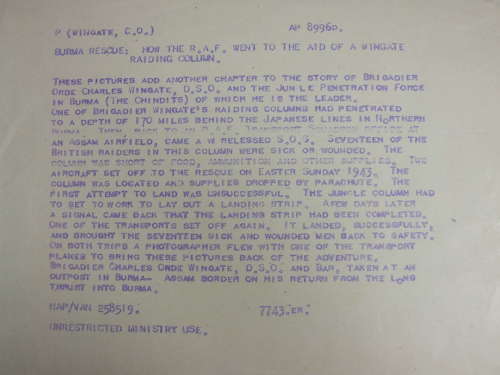 An impressive 260mm x 204mm wartime Press Release Photograph of the then Brigadier Orde Charles Wingate with the original press release narrative describing a rescue attempt mounted by the RAF to recover sick and wounded Chindits from the jungle on Easter Sunday 1943.

The photograph is in very good condition. This is second Chindit item I will be listing from the same long standing collection.

The later Major General Orde Charles Wingate, DSO & Two Bars (26 February 1903 – 24 March 1944) was a senior British Army officer known for his creation of the Chindit deep-penetration missions in Japanese-held territory during the Burma Campaign of the Second World War.

Wingate was an exponent of unconventional military thinking and the value of surprise tactics. Assigned to Mandatory Palestine, he became a supporter of Zionism, and set up a joint British-Jewish counter-insurgency unit. Under the patronage of the area commander Archibald Wavell, Wingate was given increasing latitude to put his ideas into practice during the Second World War. He created units in Abyssinia and Burma.

At a time when Britain was in need of morale-boosting generalship, Wingate attracted British Prime Minister Winston Churchill's attention with a self-reliant aggressive philosophy of war, and was given resources to stage a large-scale operation. The last Chindit campaign may have determined the outcome of the Battle of Kohima, although the offensive into India by the Japanese may have occurred because Wingate's first operation had demonstrated the possibility of moving through the jungle. In practice, both Japanese and British forces suffered severe supply problems and malnutrition.

Wingate was killed in an aircraft accident late in the war. The casualty rate the Chindits suffered, especially from disease, is a continuing controversy. Wingate believed that resistance to infection could be improved by inculcating a tough mental attitude, but medical officers considered his methods unsuited to a tropical environment. (Wikipedia)