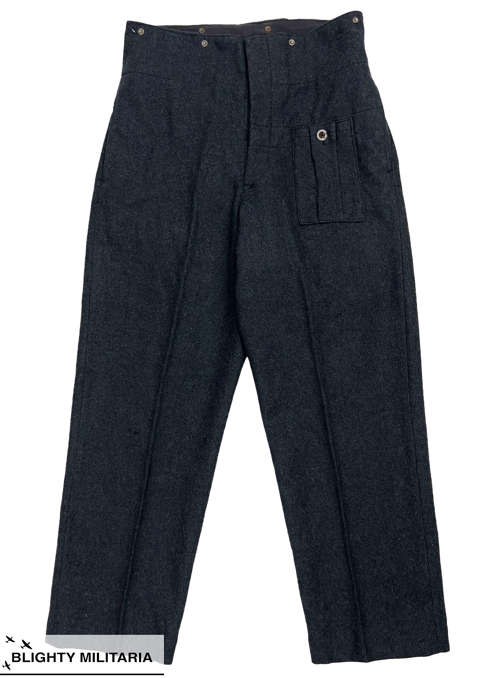 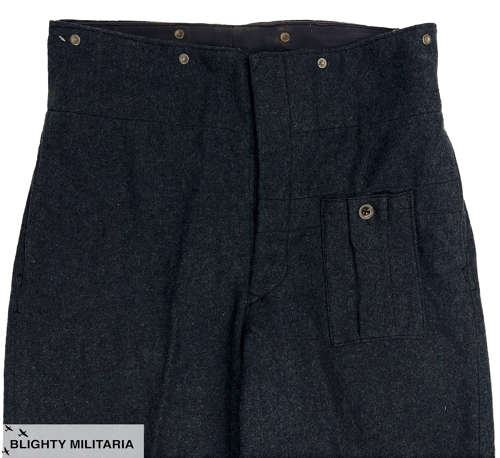 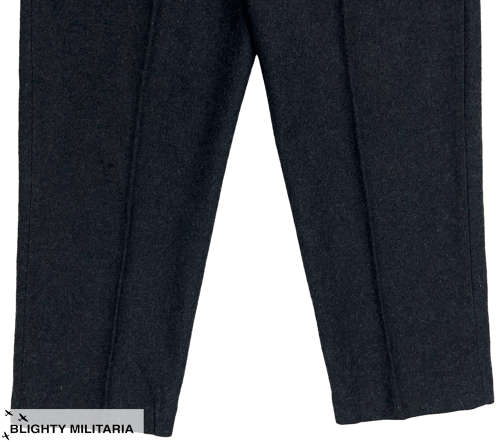 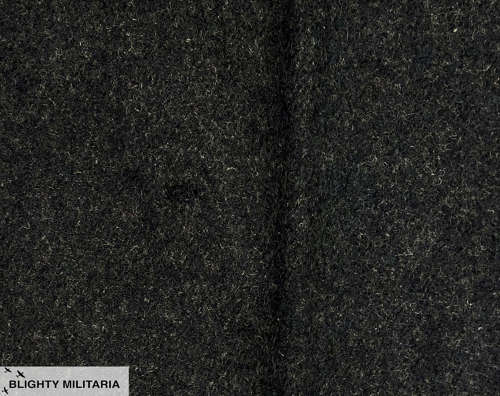 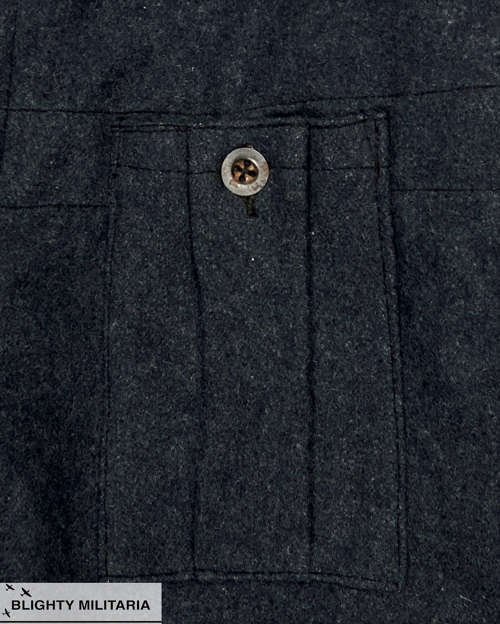 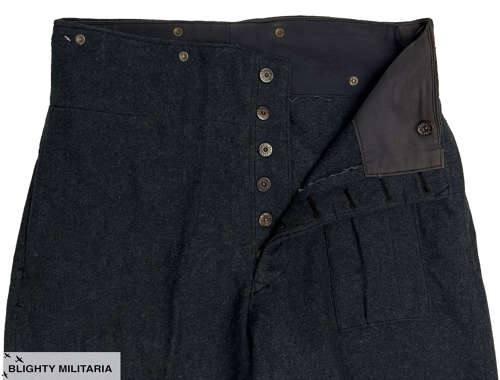 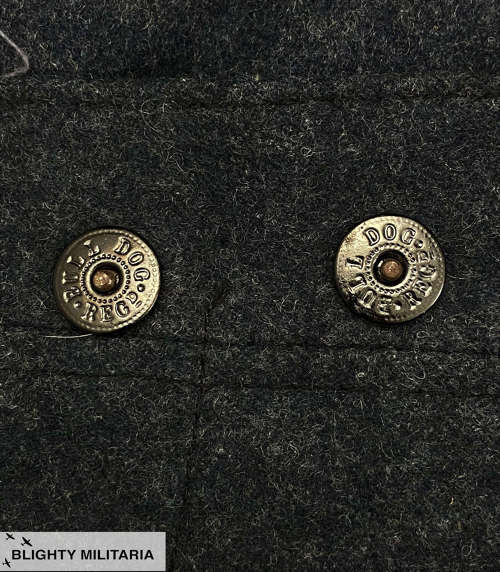 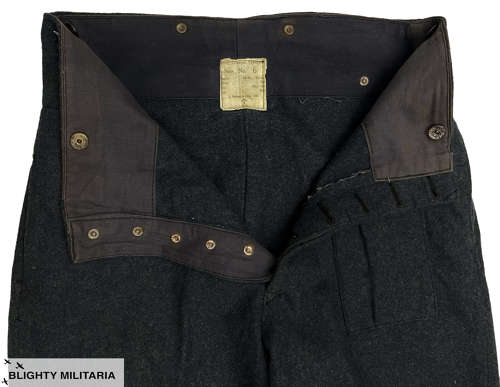 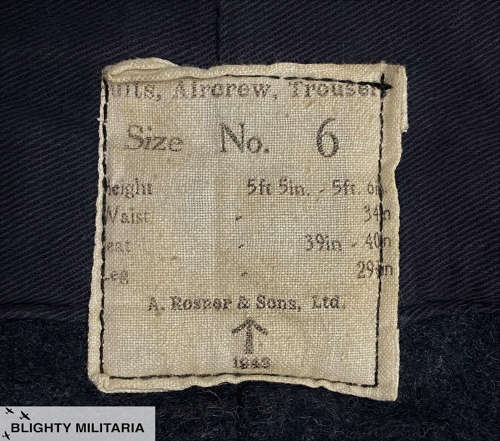 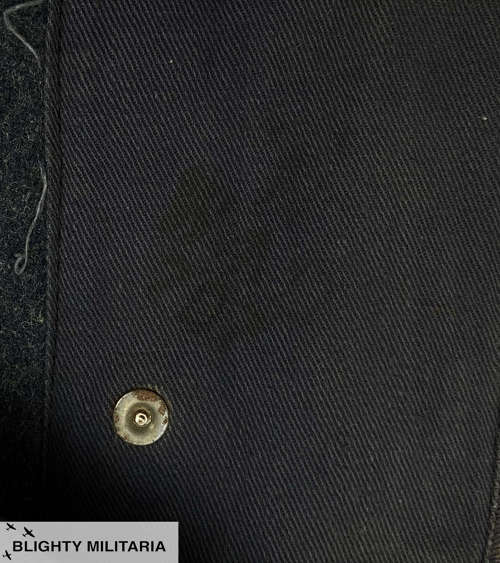 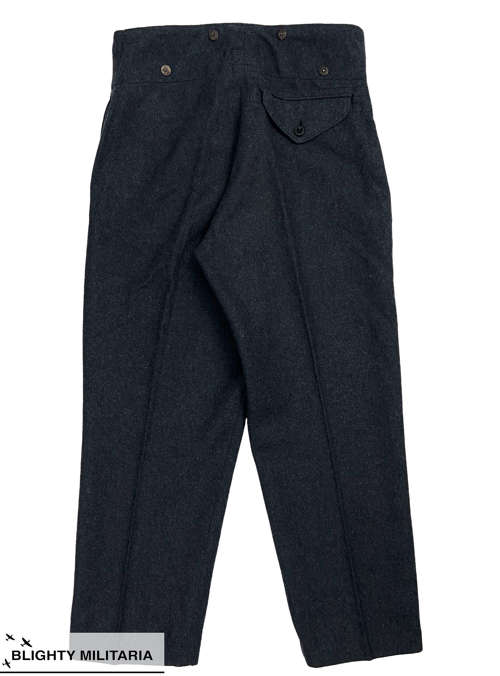 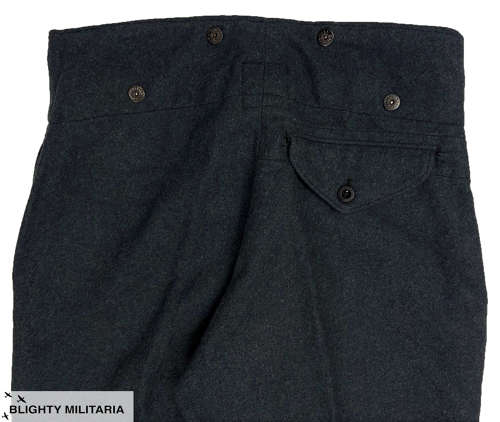 This pattern of trousers replaced the earlier 'Suits, Aircrew' (introduced in 1940) and was the standard working dress for all members of the RAF from 1942 until 1947 when the 'New Pattern' uniforms was introduced.

The trousers are made from RAF blue coloured wool serge and feature one rear buttoning pocket, a slash pocket to each hip and a first field dress pocket to the front left of the trousers. They also feature a button fly and have buttons around the inside of the waistband to which braces can be attached. Interestingly, The original owner has carefully replaced all of the original buttons with metal 'Bulldog' branded two part push together rivet buttons. These are often found as replacement buttons on wartime battledress and were most likely fitted to replace the cheap stamped zinc buttons the trousers were originally fitted with, judging by the only original button left which is fitted to the First Field Dressing pocket. This is a great period alteration which is typical of the period.

Inside the trousers retain their original label which states the size as 6 which is designed to fit someone of around 5' 6" tall, up to a 34" waist. The maker's name of 'A. Rosner & Sons Ltd' is also present as is the War Department broad arrow marking and the 1943 date. The label actually bears the earlier designation 'Suit, Aircrew, Trousers' which makes these an early example. There is also a War Department broad arrow marking which is surmounted by the letter 'N' which denotes the year of 1943.

The overall condition of the trousers is very good as can be seen in the pictures. They are in very clean condition and are not washed or faded out. There are no signs of serious wear or age save for a very small hole to the knee (picture 4) which has been patched from behind and is a period repair. This is only noticeable under very close scrutiny and does not detract from the way the trousers display.

Overall a very nice pair of original wartime pattern trousers which are a good size. Ideal for the re-enactor and collector alike!