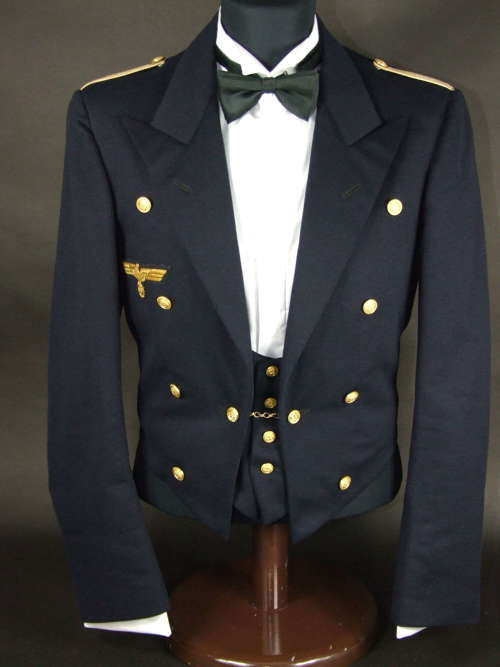 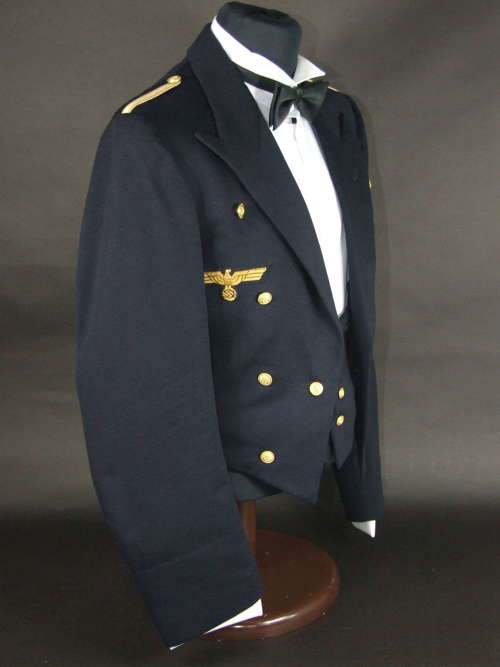 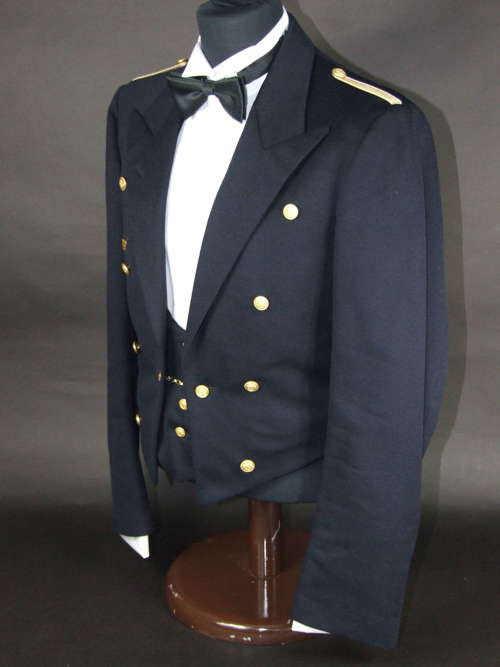 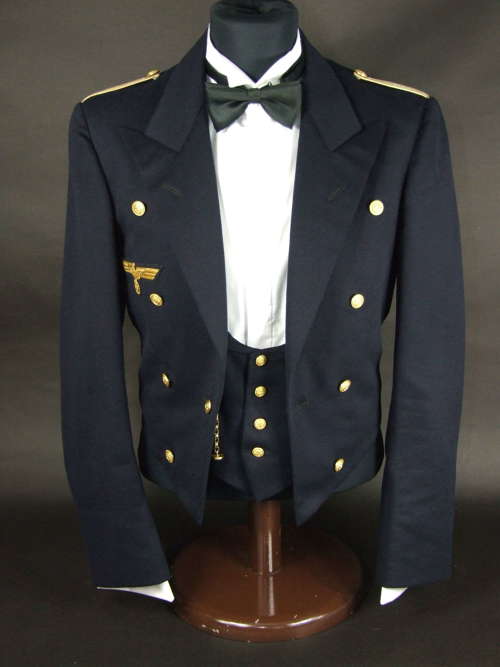 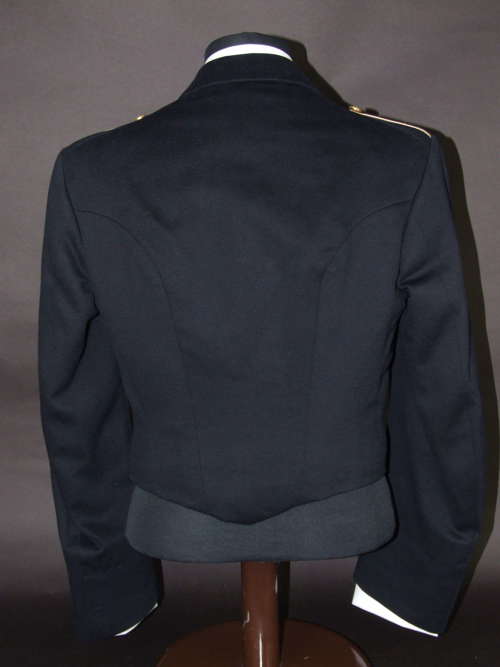 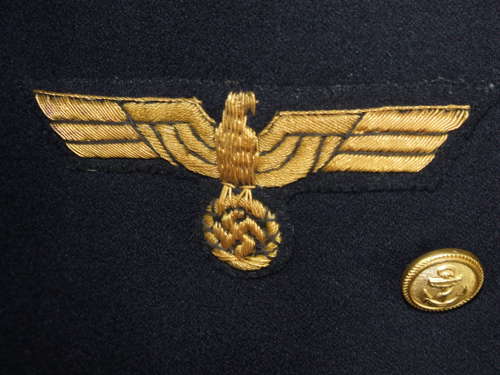 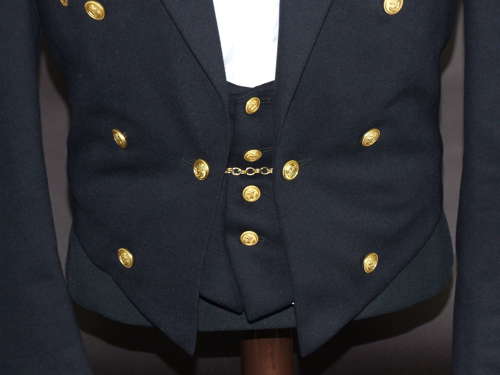 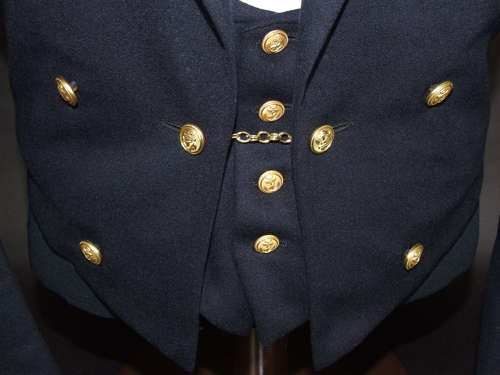 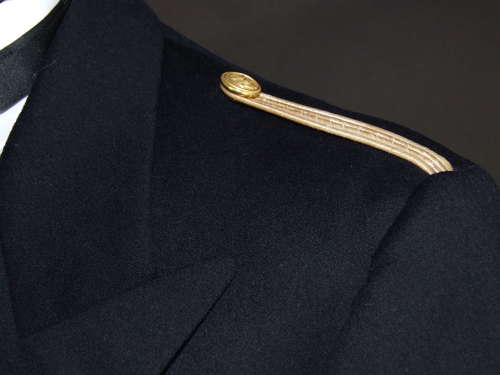 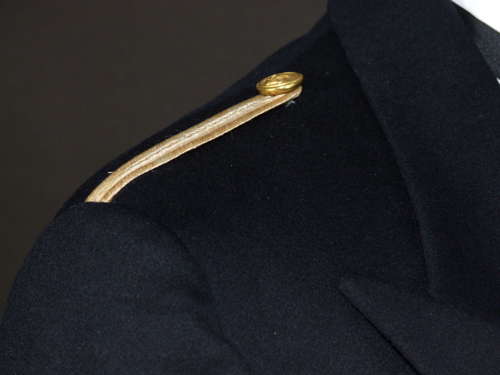 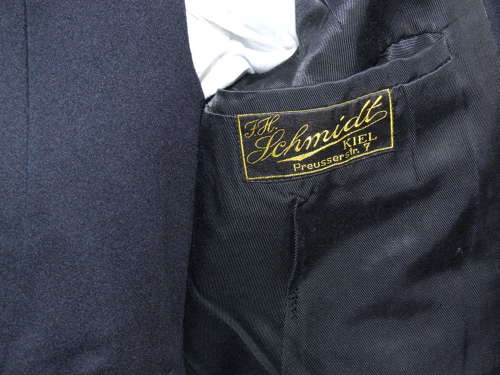 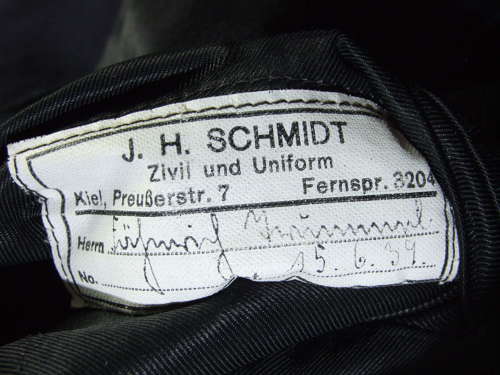 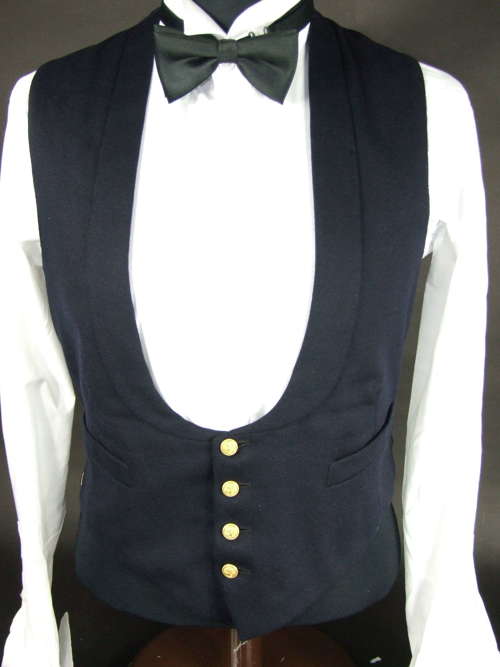 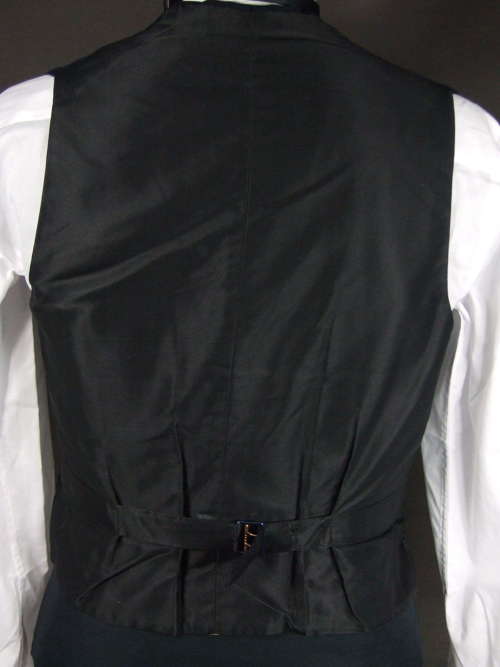 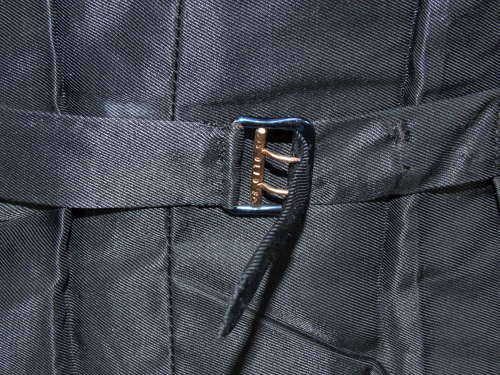 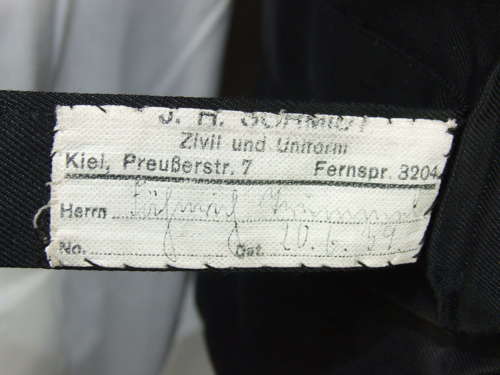 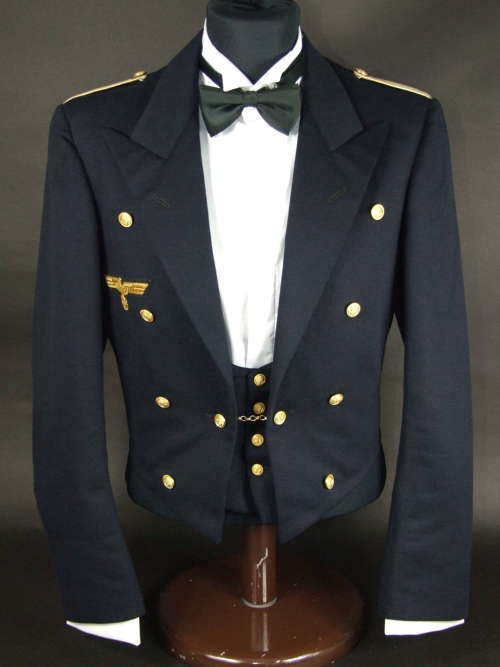 A quite beautiful kriegsmarine Mess Dress Jacket and Waistcoat attributed to Fahnrich Zur See Helmuth Trummel of U-433, sunk in the Mediterranean in November 1941.

Tailored in Kiel by Schmidt in 1939 in a high quality smooth doeskin wool, both Jacket and Waistcoat are in excellent condition with absolutely no sign of moth or any other damage.

The waist length Jacket is typically double breasted with two rows of gilt buttons by Assmann all dated 1938. Closure is by a pair of matching buttons and a short chain. On the right breast is fine Celleon thread eagle and at each shoulder are the rank straps of a Fahnrich although Trummel was later promoted to Leutnant. Lapels are wide, each with a button hole.

Inside, the Jacket is lined with a dark blue imitation silk, the sleeves with a striped tailor’s cloth. There are two inside pockets one with the tailor’s label bearing Trummel’s name and the date 15.6.39

The Waistcoat matches the Jacket perfectly and is closed by four identical buttons and a faux collar sweeping down at both sides. There are two open pockets. At the back is an adjusting belt and claw buckle again with the tailor’s label with Trummel’s name and date 20.6.39.

The wing collar shirt and bow tie are modern example added for display purposes, the shirt cut short. They can be included if needed.

The First Lieutenant, Leutnant zur See Helmuth Trummel a native of Bad Wildungen, Hessen, joined the Navy in 1937.  As a cadet he had made a cruise in the battleship "Schleswig-Holstein," to the West Indies, touching at Falmouth.  In April, 1939, he became a Midshipman, carrying out his training at the Marine Schule, Mürwik. During the early part of 1940 he served in the cruiser "Emden" in which ship he was promoted to Sub-Lieutenant.  In November 1940, he joined the U-boat School at Pillau and in March 1941, was appointed as Junior Officer to "U -433," some weeks before commissioning.  It seems probable that he made one or more operational cruises for training before joining "U 433."

Trummel was by no means in good health and whilst in Bergen in August 1941, had been twice medically examined as it was suspected that he was consumptive.  In November, 1941, at St. Nazaire whilst preparing for the last cruise, Trummel was appointed First Lieutenant, relieving Oberleutnant (Lieutenant) Georg Preuss.

"U 433" sailed from St. Nazaire on her second and last cruise at about 1700 on 9th November 1941.  For the first stage of her journey, she was accompanied by two Me.109 fighter aircraft, and for ten miles by four patrol vessels. An amazing account of that voyage and sinking is given in the transcript of the interrogation compiled from the statements given by the survivors, one of whom was Trummel. https://www.uboatarchive.net/Int/U-433INT.htm

She was sunk at 2155hrs on 16 November 1941 in the Mediterranean Sea east of Gibraltar, in position 36.13N, 04.42W, by depth charges and gunfire from the British corvette HMS Marigold. 6 men were lost and there were 38 survivors of which Trummel was one. This proved to be the first U Boat sunk in the Mediterranean from which prisoners were taken.

It would be quite impossible to upgrade this beautiful example which in my view is made even more desirable by it’s U Boat association.

Death Card and Photographs to Gebirgsjager Killed in North Africa